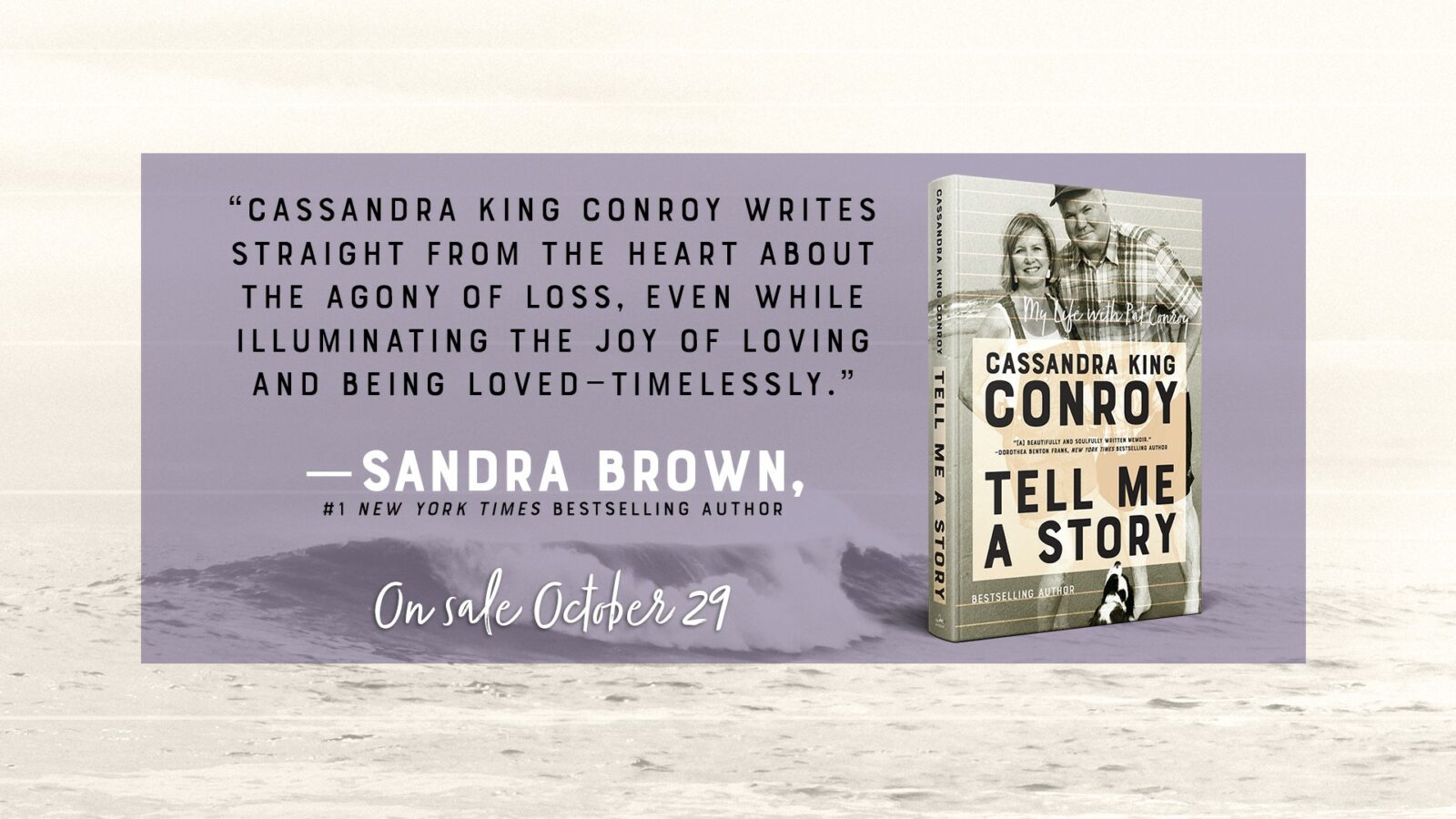 Whenever I speak at a bookstore or library about one of my books, someone usually asks me who my favorite author and books are. I always say Pat Conroy and The Prince of Tides. But recently I’ve been saying that his wife, Cassandra King—whom I’m blessed to have as a friend—is also a favorite. Her novel The Sunday Wife (2002) helped me move out of some “roles” I was playing and find the courage to let my true self emerge. I met her in person in 2006, but we didn’t really begin to interact until a decade later. She was one of the women I invited to contribute an essay to the anthology I edited in 2017, A Second Blooming: Becoming the Women We Are Meant to Be. And again in 2018, for another anthology, Southern Writers on Writing. It was humbling to edit the words of one of my literary idols, and she was always so easy to work with.

Like her beloved late husband Pat Conroy, Cassandra is generous and supportive of emerging authors. She wrote a blurb for my novel Cherry Bomb and also for my new short story collection Friends of the Library. I think the highlight of my current book tour for Friends was when she introduced me for my reading at Nevermore Books in Beaufort, South Carolina in September, saying that she was jealous of me because she wished she had thought to write this book! In her blurb for the book, she said:

“Friends of the Library is the book I have long hoped that someone would write—a beautifully wrought hymn of praise to readers and book-lovers in the most sacred of places, the libraries where we find both.”

So when Cassandra had her publisher send me an ARC (advance readers copy) of her new memoir Tell Me a Story: My Life with Pat Conroy, which releases on October 29, I was flattered and so thrilled to read and review this amazing book. In the early pages of the book she talks about her own writing, which she says she does “partly to explore the idea of redemption through art . . . that writing had been redemptive in my own journey.” Yes. And Pat wrote for this reason, too, which is a big part of why they both inspire me so much.

Redemption from what? Of course if you’ve read any of Pat’s books—or anything about his personal life—you know that he suffered horrible abuse as a child, and he chose to use that suffering to inform his fiction. As Cassandra says in Tell Me a Story:

“Most of his stories about his screwed-up life (the only way he ever referred to it) were hilarious, but occasionally he got serious. I was beginning to get a better picture of how the damage of childhood abuse is carried over into adulthood. . . . Pat was at the top of his game, where every writer dreams of being, but beneath the successful façade would always be a hurt little boy.”

I love that Cassandra also wrote about her own personal journey in this book, her self-doubt and suicidal depression. These words reminded me of her essay in A Second Blooming, “Something Has to Die” (and also an essay she wrote for an earlier anthology, All Out of Faith: Southern Women on Spirituality, edited by my friends Jennifer Horne and Wendy Reed):

“Looking back, I’m not sure I can identify the turning point, the exact moment I knew I could no longer be the me I’d become, the depressed, suicidal person who clung so stubbornly to a self-image that was becoming less valid every day. I do know that for any new life to burse into bloom, something has to die out. I had to rid myself of the phone nonperson I’d created to please others. And I did it the only way I knew, with the only resource that has ever given my inner life any real meaning. I closed the door and started to write.”

Again, here courage and actions were a big inspiration for my own journey, my own “second blooming.” If I’ve begun to find my voice at through writing, I owe a huge debt to Cassandra for this. As she says:

“God hadn’t cursed her and caused her to lose her voice; she had cursed herself by denying her voice.”

I’m not going to summarize the chapters that tell the beautiful love story of their marriage, which I loved reading, but it was Cassandra’s words about Pat’s harrowing decline with pancreatic cancer that brought me to tears. She describes his final days, surrounded by family and friends who read poetry to him and sang gospels around his bed in their home in Beaufort:

“As painful as the ordeal was, the poignant camaraderie among those of us in the sickroom I can only think of as holy. Every dark moment seemed to be infused with a celestial light of love. On the first night, three black-robed priests appeared to perform the last rites, and the house filled with the bittersweet aroma of incense. It was an incredibly moving ceremony, a powerful ritual in a house of sorrow and death.”

One of my favorite parts came near the very end of the book, when someone (they can’t remember who) called a night nurse to help in the final hours before Pat’s death. She sang to Pat and everyone who was sitting vigil with him, and then left, telling one of Pat’s friends that he was at the end of his journey. Cassandra’s son Jason and their friend Janis and Pat’s son Tim all agreed that she was an angel. As Tim said:

“Don’t look at me like that, sistah. I swear to God that was not a real woman here last night. None of us saw her arrive. She just appeared, and then she was gone. We didn’t get a good look at her because we kept the lights out. But whenever one of us got up to sit with her, she sang hymns and talked to us about God.”

And if having an angel at the deathbed wasn’t enough, there was the bridge. Again it was Tim who told Cassandra about it:

“’The nurse said that when Pat’s time came, we’d know. A bridge would come down from heaven to take him.’ . . . . Early that evening Pat left this world for the next, taking his last breath right after darkness fell. He would have appreciated the metaphor. The sunset that day had been a benediction, more spectacular than ever. And a strange thing happened before the sun, in a blaze of fiery pink, sank into the gently flowing creek. For a brief moment of gold, the sun appeared through an opening in a cloud, then a beam of light began to form a bridge directly over the creek, one that led up to our dock. . . . as if to offer him a passage from this world to the next.”

Having been with four people at the moment of their deaths—my father, my aunt, my brother, and my mother—these stories of angels and golden bridges are completely believable to me. As I told Cassandra after reading the book, I believe the spiritual world is actually more real than the physical world. When my aunt was dying in a hospice facility, she pointed to the open door of her room and said, “Look at that beautiful peacock!” Peacocks are a symbol of the resurrection in religious art. And then she added,”and those three handsome men.” When I asked her who the men were, she said, “Well it’s Dan, Jimmy Ray, and Billy, of course.” Her husband Dan, and her brothers Jimmy Ray and Billy (my father) were all in heaven, waiting for her to join them.  I can only wonder if they’ve had a chance to listen to Pat tell stories yet.

Want to hear Cassandra talk about the book? Tell Me a Story launches on October 29. Find her on her book tour here! She will be in Memphis at Novel on November 5 at 6 p.m. Can’t wait to see her again!