When I was a student at Murrah High School in Jackson, Mississippi (1966-1969) I had a guidance counselor named Carl Ray. Mr. Ray was very formal in his speech and demeanor—even a bit stuffy. And we were an odd pairing, since I was an academic “rebel” of sorts. It’s not that I was a complete slouch—I finished 67th in a class of 407. But there were quite a few National Merit finalists and scholars ahead of me on that list, and frankly, I didn’t really care. I wasn’t on the fast track to academic excellence. I was more interested in other things.

Beginning with my sophomore year (first year for our high school) when I got a part in the school’s production of “Our Town,” and also nabbed a position as feature writer on the school newspaper, “The Hoofbeat.” During my junior and senior years I majored in the arts, painting stage scenery for our musical production of “L’il Abner” while continuing with the newspaper, as advertising manager and finally business manager. Did I mention that I made it all the way through high school without taking any classes in science or languages? And only minimal mathematics courses? I loved English, and my senior year I had a terrific teacher who focused on composition and taught me to revise my work. So how did my path put me at odds with my guidance counselor?

I remember being called into Mr. Ray’s office once (well, more than once) to talk about my schedule for the following year, which would have been my senior year. He expressed concern because I didn’t have any science courses. I reminded him that I took biology in the 9th grade, and that was the last year of science that was required to graduate. He was miffed because most students who skip 9th grade science in order to take biology are on the advanced route—they do this in order to take three advanced science courses in high school. I did it to get out of one year of science. He couldn’t make me take more. But what about language and accelerated math? I wasn’t interested in either. I padded my schedule with advanced art, journalism, and home economics, which I scheduled during lunch so I could take my own food and warm it up in the classroom’s kitchen. Poor Mr. Ray was frustrated with my lack of academic motivation.

Some of the students in our school made fun of Mr. Ray for being from the small town of Eupora, Mississippi. I remember hearing them ask him if they had wooden sidewalks in Eupora. I never gave it another thought until October 9, when I drove down to Webster County to speak to the Friends of the Library group there. 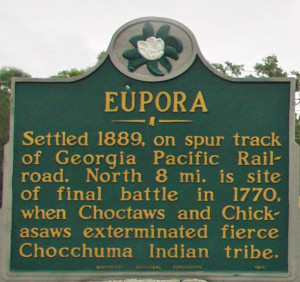 Eupora has a population of about 2500 people, living on 5.6 square miles of land. It’s amazing that they even have a library, although it’s only open three days a week and has one part-time employee and a couple of volunteers. I wasn’t sure what to expect as I drove through this tiny town and found the library. The drive itself was easy—straight down I-55 from Memphis to Winona, and then a few miles east on Highway 82. Cotton fields popped up on both sides of the highway as I gradually stepped back in time. Eupora was designated a Historic District on the National Register in 2011. The railroad depot, built in 1885, is the oldest surviving building in the town. And yes, there are wooden sidewalks. 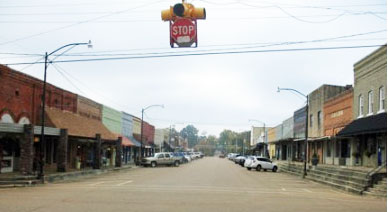 But there are also a number of avid readers, including some retired school teachers, in the very active Webster County Friends of the Library group. 14 of them showed up for my reading. Before the meeting started, I asked a couple of the ladies if they knew a man named Carl Ray. They immediately lit up and began telling me his story. He was Superintendent of Education in Eupora before he moved to Jackson to work with the public schools there. They adored him. Eventually he retired back home in Eupora, and had only passed away a couple of years ago. One woman had visited his 90-something-year-old widow in the nursing home just the day before I arrived in Eupora. I told them he had been my guidance counselor in high school, and they all said how lucky I was to have had him. I just smiled and agreed with their assessment of him.

Meanwhile we gathered in a tiny room in the back of the library where three tables were decorated with fall and Halloween décor. I was set up with a podium from which I gave a reading and led a discussion about my novel CHERRY BOMB. They asked very informed questions and several folks purchased copies of the book and asked me to sign them. The group even bought a copy for the library. “Miss Betty” had prepared our lunch, which was served on paper plates at our tables—ham and cheese and pimento cheese sandwiches on white bread with the crust cut off, potato chips, soft drinks, and homemade pies for dessert. As I visited with these folks I thought about how far removed their lives were from “Mare,”the young run-away graffiti artist in CHERRY BOMB, Elaine deKooning, the famous abstract expressionist painter, the Orthodox nuns and the weeping icons. Maybe I brought a little bit of color into their lives with the stories I shared. They certainly enriched my life that day in Eupora, Mississippi, and I gained a greater appreciation for Mr. Carl Ray. May he rest in peace.