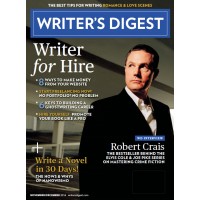 There’s an excellent article in the November/December 2016 issue of Writer’s Digest called “How a Month of NaNoWriMo Can Lead to a Lifetime of Better Writing” by Grant Faulkner. If you’re not familiar with NaNoWriMo, it the National Novel Writing Month that takes place each November. Participants sign up with a goal of writing 50,000 words in 30 days, or about 1,667 words a day. At the end of the 30 days, some people have actually completed a novel, and others have made a great start. I think it’s the discipline of writing for an extended period of time every day—and knowing that others are doing the same (like in an exercise class)—that encourages people to participate.

Faulkner’s article cites the importance of “practice” in order to excel, noting that most successful authors write thousands of words that end up being thrown away before ever publishing anything. I certainly did. So even the words you produce during NaNoWriMo don’t end up in a final product, at least you are writing in a disciplined manner. And the program includes “pep talks” from bestselling authors to each participant during the month.

Finding time to write is crucial for most writers who also have (1) day jobs and/or (2) children at home. Since I don’t have either of those commitments, and consider myself a full-time writer, time isn’t my problem. It’s how I choose to use my time that matters. And yes, I’ve been productive these past few years, and the work is paying off in the form of four published books coming out between January 2017 and spring of 2018, although two of those are anthologies I edited rather than books I wrote. So now I’m ready for another project, and I’ve decided to write another novel. This is so much harder than organizing and editing an anthology (at least for me) so I know I’m going to need some motivation. I’m not going to wait until November (NaNoWriMo month) but I am going to take some of their concepts to heart. Since I’ll be starting a book tour in just over a week, I won’t have an uninterrupted month until June, but on the days I set aside for writing, I plan to look at them as though they were part of that month. As though I had a deadline. One advantage, according to author Hugh Howey, who has participated in NaNoWriMo since 2009 with successful results, is this:

Piecing a novel together over a year or more, one paragraph at a time, with days and weeks off in between, does not produce the same quality for me as writing full-bore.

Writing full-bore. That’s how I need to approach this next novel. I really don’t want to spend six or more years on it (as I did with Cherry Bomb, when you count time off for my car wreck, and months spent querying agents and publishers, and revising with several different editors) and I hope that I’ve learned some things that will move the project along better this time. We’ll see….