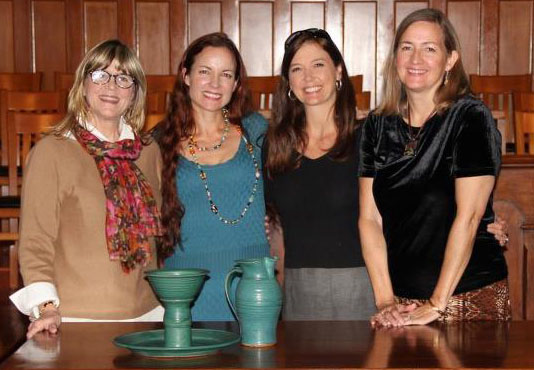 Pictured above: Susan with her friends and mentors Beth Ann Fennelly, Wendy Reed, and Jennifer Horne, at a reading for Circling Faith: Southern Women on Spirituality, September 2012 in Oxford, Mississippi, which Jennifer and Wendy edited, and to which Beth Ann and I contributed essays. Beth Ann, Wendy, and Jennifer have contributed essays to several anthologies I have edited during this past decade. This was the first book in which I was published.

Back in 2011 I did a “Decade in Review” post on my old blog site. I’ve been planning on doing another one here, and I started by scrolling back through several years of posts and copying the links of the ones I felt were more significant. Problem was that I was selecting too many links and this post would be ridiculously long. And of course, none of you care nearly as much as I do about these posts, so I don’t want to bore you with them. Instead I’ll try to do a brief recap here, as much for myself as for my readers.

Our daughter, Beth, completed her master of architecture degree, got married to Kevin Davis, and had two daughters, Gabby (7) and Izzy (4). They live in Denver. Our son Jason and his wife See had two daughters, Grace (10) and Anna (9). They recently moved to Scottsdale, Arizona. Our son Jonathan finished his third tour with the Army (Iraq and Afghanistan) and retired back to the states in 2012 or 2013 to fly med-evac helicopters, which he now does out of his home in New Orleans. The last time we were all together was in May of 2017 at Seagrove Beach, Florida, which we are looking forward to doing again this coming May.

My husband Bill won numerous awards for his work in preventive medicine (especially hypertension) including the 2017 Inter-American Society of Hypertension Lifetime Achievement Award, which he was presented in Argentina. In 2010, he received the John Blair Barnwell Award from the VA Clinical Science Research and Development Service, for outstanding scientific achievement in clinical research—VA’s highest award for clinical research. (I traveled with him to Washington, D.C. for the award ceremony.)

This has been a banner decade for me in many ways, both good and bad. Possibly the most significant “event” was my near-death car wreck on July 7, 2013, in which I broke my neck, right leg, and ankle. This happened during a time when I was angry at God, church, and several people I love. I could have easily died or been paralyzed, and God used this event to bring me back to Him in many ways.

On May 22, 2016, I lost my mother Effie Watkins Johnson to Alzheimer’s. This was the end of more than a decade of decline during which she lived at an assisted living facility for about three years and then a nursing home for eight years. Eight months later I published my first book, a memoir—Tangles and Plaques: A Mother and Daughter Face Alzheimer’s. On October 7, 2017, my dear friend Sissy Yerger died, and on March 29, 2019, I lost a lifelong friend, Nancy McGee, to Lewy Body Disorder. I had known Nancy for about forty years, and Sissy for almost that long.

Overseas travels: I enjoyed trips with my husband and our “travel buddies Tim and Deb Mashburn to Paris (2016) and a cruise on the Rhine River with stops in Germany and France (2018). (We went to Italy, London, Greece, Germany, Monte Carlo, the Czech Republic, Austria, and Australia during the previous decades. And of course my husband travels all over the world for work, including China, India, Korea, Spain, and other places I can’t even remember!)

The end of writing icons

Having spent much of the previous decade writing icons (here’s a post about why I “retired”) this past decade was definitely my year for writing—essays and books. I did have a few essays published prior to 2010 in various journals and magazine, but not in books. So here’s what happened from 2010-2019 in my writing and publishing world:

I spent three glorious months alone, at writing “retreats” on the beach in Seagrove, Florida, in 2011, 2012, and 2013. Much of that time was spent on my novel Cherry Bomb. I also co-directed two Creative Nonfiction Conferences in Oxford, Mississippi (2010 and 2013) and directed the 2011 Memphis Creative Nonfiction Conference and a one-day writing workshop at Novel books in Memphis in 2018. I spoke at numerous festivals, conferences, and workshops in Tennessee, Mississippi, Alabama, Georgia, Louisiana, and Texas.

During the past decade I had essays published in four anthologies: Circling Faith: Southern Women on Spirituality (2012), edited by Jennifer Horne and Wendy Reed; The Shoe Burnin’: Stories of Southern Soul (2013), edited by Joe Formichella; Dumped: Stories of Women Unfriending Women (2015), edited by Nina Gaby; and Take Care: Tales, Tips, and Love from Women Caregivers (2017), edited by Elayne Clift.

I also published six books—three I wrote and three I edited:

A Second Blooming: Becoming the Women We are Meant to Be (March 2017) ANTHOLOGY (editor)

So, I guess that’s a wrap. Moving forward to a new decade, I have an essay collection (working title is Pilgrim Interrupted) being considered for publication by a press currently, and I’m in discussion with an artist friend about a possible collaboration on a book with her art and my words. I’ve also got several more events scheduled on my book tour for Friends of the Library during January through May, which will take me to Louisiana, Texas (twice), South Carolina, and Mississippi (several times). Click on my EVENTS page for dates and locations. I am so blessed to be enjoying this “late life career” in which I get to do what I love most: write, talk about writing, edit, be with family, and travel! Thanks, always, for reading!