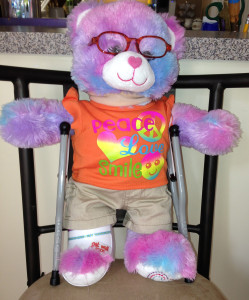 Forgive me, readers, for I have sinned. It’s been three weeks since my last blog post. Those of you who are on Facebook understand my absence. Others have sent emails asking if I’m okay and why I’m not blogging, since I’ve been posting three times a week pretty faithfully since August of 2007.

This will be the first of a series of posts in which I do a bit of explaining and a bit more reflecting on the life-changing car wreck I had on July 7. I’ve been thinking about what I want the focus of these posts to be, and I’ve decided on “Hope.” My precious daughter, Beth, who flew home from Denver to help take care of me for a week, made me this wonderful Build-A-Bear (complete with foot cast and crutches and neck brace) and named her “Hope.” Many cards and emails I’ve received have mentioned hope, including that wonderful verse from Emily Dickinson, “Hope is the thing with feathers that perches on the soul.” So I wake up every morning and ask God to help me hold on to the hope that I will get stronger each day. So far He has not disappointed me.

Without going into too many details (maybe in a later post, maybe not) I was driving on country roads late on Sunday night, July 7, between Waterhole Branch and Fairhope, Alabama, when I ended up in a head-on collision with an ambulance. We are still sorting out the how and why of the wreck, but I was returning to my hotel after an evening at Joe Formichella and Suzanne Hudson’s home, where I had dinner with a group of writers and musicians who are being featured in an upcoming book, The Shoe Burning’ Anthology: Stories of Southern Soul. My essay, “Eat, Drink, Repeat,” is included in the anthology. Our publicist and publisher were there to oversee the shooting of a marketing video for the book the next day. I’m sad to have missed the video, but I’m honored to be included in the book with these amazingly talented folks. And I’m even more thankful to be alive. And that no one else was hurt. There were two paramedics in the ambulance, which was not transporting a patient at the time. 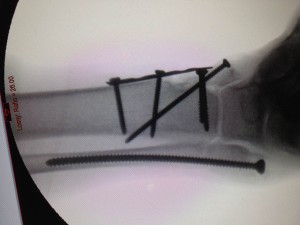 I ended up at Sacred Heart Hospital in Pensacola, Florida, where I spent 4 days. They did surgery on my cervical spine, where I had fractures, and also on my right foot and leg, where I had multiple fractures. The surgeons did external fixation with the first surgery. My husband flew down the day of the surgery and I returned with him to Memphis on July 11. On July 22 I had a second surgery on my leg, this time here in Memphis, where I now have internal fixation—lots of screws, plates, and bolts. I will be non weight-bearing on the right foot for 10-12 weeks. I am also in a neck brace for a number of weeks or months.

An incredible “team” of friends and family have me set up in my downstairs office (our bedroom is upstairs) with a hospital bed and other equipment. I have been flooded with cards, flowers, gifts, calls, visits, and meals. Volunteers are scheduled to sit with me during the days for two weeks after my daughter returns to Denver on Sunday. I’m hoping to be a bit more independent in a few weeks, but I will be using a walker for a couple of months and of course I can’t drive. I’m 62 years old, and I have never been in a completely dependent mode before. I’m learning to let go of the illusion of control and trust God and the people who are helping me. I’m also beginning to learn to slow down and live in each moment, being patient as my goals change. I yearn to get back to work on the revisions on my novel and my other writing projects. I miss my “life” as it was before the wreck, but I’m trying to accept the silver linings that come with such a life-changing event.

When Dr. Nawar Mansour and his family visited me at home last Sunday (his daughter, Sophie, is my Goddaughter) he looked at my medical records and the descriptions of the wreck. Then he said to me, “They made a mistake on this report.”

“What mistake?” I asked.

“It says here that you were the only person in the car.”

“That’s right.” I was perplexed.

“You were not alone. St. Mary of Egpyt was there in the car with you. You are not dead. You are not paralyzed.”

Of course I burst into tears at Nawar’s reminder that my patron saint was, indeed, with me at the accident. And so, as I press forward with the long and difficult hours and days of pain, nausea, exhaustion, frustration, and everything else that goes with being a fallen human being, I am trying to remember how much worse it could have been. “Hope” helps me remember, with her funky hippie clothes and rainbow fur, and her cute little glasses and crutches. The physical therapists and nurses and family and friends are also reminding me with an outpouring of love that humbles me and feels like a loving heavenly Father holding me in His arms.

If you’ve been reading my blog for the past couple of years, you know that I’ve been in a messy battle with God, faith, church, and all that. Maybe O’Conner was right. Maybe the South really is “Christ-haunted.” All I know is that I’m not angry at God right now. And I do believe in Him. And for today, I believe He loves me. If this is what it feels like to have hope perching on my soul, I’ll take it.