>Saturday was a long day. I left Memphis at 8 a.m. headed to Oxford for my monthly critique session with my fellow writers in the Yoknapatawpha Writers Group. It was going to be a sad day of goodbyes to two new friends: 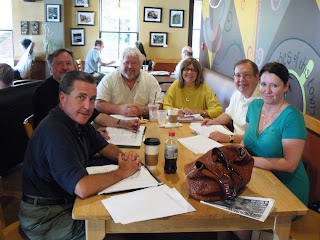 Michael, (front of table in dark blue) who just joined our group in June, is moving to Florida with his wife, Jeanette, in August. Michael’s about to start revisions on a great novel he drafted while living in Oxford this past year. (He and Jeanette moved to Oxford from California, after he retired from 18 years as a prosecuting attorney.) Needless to say, he’s using those experiences to great advantage in his book, and I can’t wait to say, “I knew him when!” 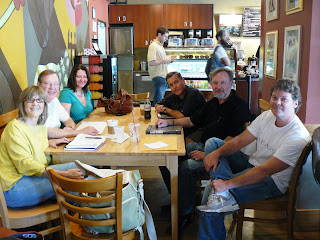 And Scott, (white t-shirt) one of our instructors at the Yoknapatawpha Writers Workshop in June, joined us for coffee and later drinks, before his departure (also in August) for California. Scott’s got two books already published and is seeking representation for his third novel. He’s been so generous with his time and encouragement to us fledglings, as so many published authors are.

So after a day of work, several of us decided to drive down to Philadelphia, Mississippi, for the 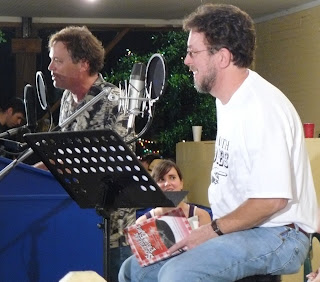 2008 Neshoba County Fair’s second night. It’s an event I’d heard about my whole life, but had never attended. Part of the impetus was that Tom Franklin would be reading from his story in the anthology, Southern Fried Farce , and of

course we wanted to go hear him and show our support. (That’s Jim Dees introducing Tom for his reading, right.) The Thacker Mountain Radio Show which airs from Off Square Books in Oxford on Thursday nights during the fall, winter and spring months, would be taking it “on the road” to the fair Saturday night, with great music in addition to Tom’s reading.

So, Doug headed over to Tupelo to pick up his wife and kids and meet us there, while Herman and I made the two and a half hour drive straight down to Philadelphia in a separate car. Shortly after leaving Oxford, Herman asked if I would mind stopping for a few minutes to see some of his people on the way. We were barely going to make the 7:30 show as it was, but of course I said okay, where do they live and he said I’ll show you when we get there. 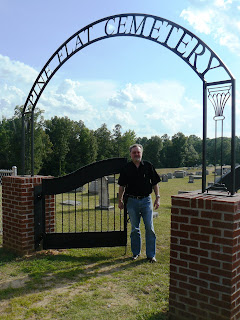 Somewhere south of Oxford we turned off Highway 9 at Pine Flat, Mississippi and down a winding road to the Pine Flat Methodist Church Cemetery, where most of Herman’s relatives are buried. We got out and walked around in the steamy heat, and he showed me the graves of his great-grandparents, grand parents, parents, and aunts and uncles. As he walked from grave to grave, introducing me to his 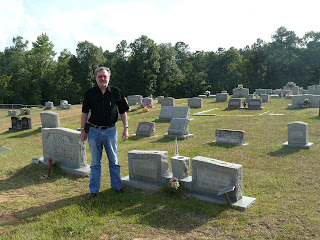 people and carefully straightening an American flag here, tenderly picking up a dead flower there, Herman remarked that he needed to send a check to the church there to help with maintenance at the cemetery. I looked at him and admired how much he cared about his people, and I thought about my people.

My mother’s parents and grandparents are buried about 150 miles away in Meridian, Mississippi. My brother and my father and his people are mostly buried in and around Jackson, Mississippi. Of course all of this stirred me up to thinking about that Rodney Adkins song again, “These Are My People,” (watch a video here )especially these lines:

And in one of the verses later:

Even if we are a bit disturbed,
These are my people.

I’m thinking about these words when we arrive at the Neshoba County Fair. Well, not right at first. At first I’m thinking about how I’m going to make it up the muddy hill on the cow pasture they’re using for a parking lot. I watch the two guys in the pickup truck in front of me sliding backwards down the hill when they don’t make it up the first time. Once they make it, I floor it and steer close to the side of the hill, so my right tires can get some traction on the grassy part, and in two shakes I’m at the top of the hill, where the fair worker directs me to turn down the next aisle of parking. As I pull in beside the pickup truck and open my door, the guys in the truck holler at me, “Wow! You’re really a good driver.”

They’re probably in their 20s and looking at me and stopping themselves from saying, “for a girl.”

I just smile and look at the driver of the pickup and say, “Thanks. You did okay for a guy.” 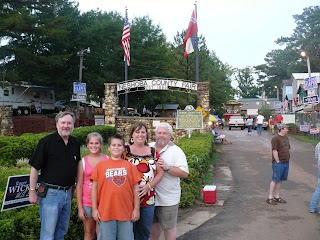 About then Doug and his wife and kids walked up and we all had a good laugh before hiking through the mud and wet grass (and swatting off the ants that were biting my feet) to the main gate of the fair.

Cars were parked along both sides of Highway 21 for a mile in either direction of the front gate, and once inside, the sub-culture that is the Neshoba County Fair was more than I was prepared to absorb in a few hours. First the cabins. 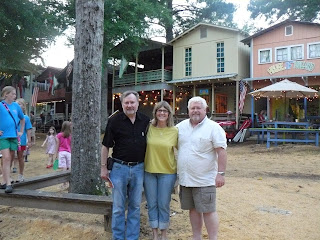 600 (yes) darling, I mean darling¸ little two-story cabins decorated in shabby chic colors and furnishings with strings of lights and Japanese lanterns strung everywhere for rows and rows in every direction. Some of these cabins have been owned by certain families for generations and others are leased out yearly. The ones around “Founder’s Square,” where the pavilion that 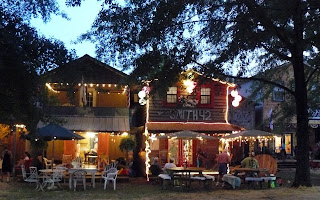 houses political speeches and literary readings and musical entertainment sits in the middle, must be worth a fortune. In Philadelphia, Mississippi? Yes. Because everywhere I looked, I saw hundreds of Beautiful People who looked like several generations of old money and Mississippi beauty queens and golden boys.

My first reaction was, “I need a beer.”

Doug looked at me like I was crazy and said, “it’s a dry county.”

“What? How on earth can this be called Mississippi’s Giant Houseparty® and there be no beer?”
“Oh, there’s plenty of beer. They let you bring in as much as you want to. They just don’t sell it.”
My throat suddenly felt very dry and my nerves very edgy as I looked around at the people entertaining dozens of guests on their front porches around the square, all sipping wine and beer from plastic cups. I looked for a familiar face. Since most of the folks looked like they had been in my sorority or my husband’s fraternity at Ole Miss, I thought surely I’d find someone I knew that I could go up to and say, “Hi! Remember me?” and then somehow work into, “I didn’t know you couldn’t buy drinks here,” in my best Southern-eze.

But as I searched the crowd, while everyone looked familiar in a generic sort of way, there was no one I could put a name with. And I began to wonder… who are these people?

A few minutes later Doug brought me a giant lemonade from the midway, which actually tasted 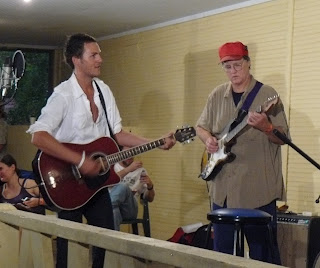 great, and I thought, okay, I can do this. I can hang out here in this nether-world with “my people” stone sober and just soak it up. Just enjoy the music and Tom’s reading (both were great—here are some photos) and hanging out with my writing buddies and not even notice that everywhere I look I see more Beautiful People. Thin, gorgeous women and girls with beautiful hair and luminous faces, some in strapless sun dresses and sandals or cute little rain boots, others in shorts or capris or jeans with t 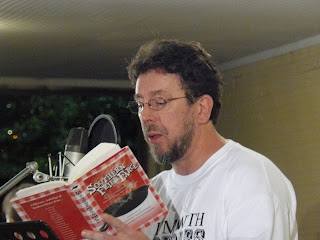 ank tops or peasant blouses, all glowing with that quintessential Southern accessory, a summer tan. And golden boys with khaki shorts or jeans and button-down-collar long-sleeved shirts rolled up to the elbows or t-shirts with cool slogans on them. A few cowboy hats and boots and more than a few aging yuppies with beer guts, but for the most part, they seem to have aged well.

Tom’s reading was great. And Afterwards, being the gracious person he is, he went to the Howorth’s cabin and came back to the square 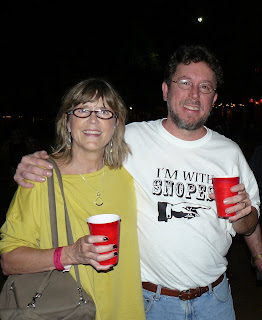 with two cups of cold beer, one for himself and one for me! (I think Doug told on me.) We shared a few laughs, especially when Tom said he considered, for a moment up there on that stage where so many politicians have given speeches and will be speaking all week, raising his hand in the air at the end of his reading and shouting, “Obama ’08!” We shook our heads: probably not a good idea.

It was then, as we stood around and talked shop for a while with Tom (who’s great about sharing stories and tips about agents and editors and the publishing world) that it hit me: Are these my people? Not the thousands of beautiful people in the pavilion and the cabins, but the half-dozen struggling writers standing around Tom in a semi-circle. Because it was in this circle that I felt at home.
In the larger circle that was the Neshoba County Fair, a micro-cosm of the Old South, I couldn’t help but notice that there was not one Black person to be found on Saturday night. Well, unless you count one of the security guards who showed 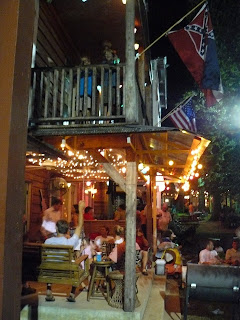 up around 9 p.m. Not one. In a state that has the highest percentage of African Americans of any of the 50, not one of them came to Mississippi’s Giant Houseparty®. I mentioned this to someone, and he said, “I’ve never thought about that. They could come if they wanted to, but I guess this just isn’t their thing.”

Not their thing? Great music and political speakers and literary readings and food and fellowship outside on a summer night in Mississippi? Black people wouldn’t like that? 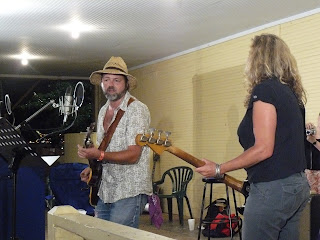 Or could it have something to do with the fact that less than 3 miles from the Neshoba County Fair, in 1964, three civil rights workers’ bodies were found buried on Olen Burrage’s Old Jolly Farm, having been savagely beaten and shot three times? The juxtaposition of that part of Mississippi’s history with the fun and games of the Beautiful People on this summer night in July was a powerful image for me to hold in my head.

Driving home to Memphis (arriving around 1:30 in the morning) I thought about it a good bit. I was born in Jackson and lived in Mississippi for 37 years before moving to Memphis in 1988. And I’m continuing to try to connect with “my people” as I hone my craft with other writers at workshops and critique sessions down in Oxford. But as I think about the Beautiful People at the Neshoba County Fair, and the writers and artists and musicians who had been invited there to celebrate life together in Mississippi, without their beautiful Black neighbors, I still wonder, are these my people?
Please share!

2 thoughts on “>Are These My People?”