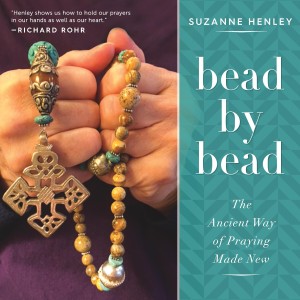 Bead by Bead: The Ancient Way of Praying Made New

Suzanne Henley is an artist. And a renovator of old houses. And an author. Her book, Bead by Bead: The Ancient Way of Praying Made New, is being released by Paraclete Press on March 13. TODAY! I wrote a bit about it back in January, here:

I’ve been looking forward to this for many reasons, but mainly these four:

(1) In 2013 I was in a life-threatening car wreck. I broke my neck, right leg, and ankle, and was stuck in my house for the first few months of my recovery. One day Suzanne came to see me and brought me a beautiful necklace she had made from these exotic beads from all over the world. They were prayer beads. And a she had written a description and meditation to go with it. I held them as I lay in my hospital bed (at home) and prayed. And later I hung them on the wall near my computer as a reminder of her kindness and God’s grace and healing.

(2) I share a love of art and spirituality with Suzanne, although my art takes the form of writing (painting) icons in the ancient Byzantine style using egg tempera. And I have been taught to make and use Orthodox prayer ropes—tied with knots rather than strung with beads—as part of a practice of meditation and prayer.

(3) For several years I was in a writing group that Suzanne hosted in her home here in Memphis. I knew right away that she was a gifted writer, and when she submitted sections of her work-in-progress for us to critique, I knew it was something special. Part memoir, part spiritual meditation, her personal essays—which is what they seemed at the time—eventually joined with chapters about prayer beads, and Bead by Bead came together.

(4) A fourth reason for my excitement about this book is that Suzanne contributed a wonderful essay to a collection I edited, and which was published last year by Mercer University Press: A Second Blooming: Becoming the Women We Are Meant to Be. Her essay, “Beyond This Point There Be Dragons,” is a gripping story of personal trauma and her eventual blooming into a stronger, more amazing woman. And so for these four and even more reasons, I celebrate Suzanne’s book.

Suzanne doesn’t claim to be an expert on prayer beads, or even on prayer itself. But I love what she says about prayer in that very disclaimer in the beginning of her book, in the section called “Rebranding Prayer”:

I have no idea whether prayer produces any external results. I have to come to believe, though, if nothing else, it is where I most squarely meet myself. I think it is the psychic glue between my conscious and shadow self where we all wrestle with Jacob’s angel and count our scars later.

She introduces the book by explaining that the stories she has included represent “a prayer bead in my life’s rosary…. The book is also an adult version of Show and Tell of some of the hundreds and hundreds of sets of prayer beads I’ve made—each unique, many commissioned to be carried to diverse people around the world. Many of the stories I tell are accounts of these real people for whom praying bead by bead has become an essential spiritual practice.”

In the Prologue, Suzanne tells the story of her employee, O.G. Pierre (“Original Gangster Pierre”) who asked her to make prayer bead necklaces for all the members of his gang, using a Star of David for each one, since it was the symbol of the Gangster Disciples. She had to decline that request.

In “Clearing Your Cache and Beginning to Pray,” Suzanne explains how to use the beads—physically and spiritually—in your daily encounters with God.

In “Prayers, Poems, Lectio, Music, Silence,” she encourages the reader to write her own prayers, but she also offers some traditional prayers for use with prayer beads, and talks about the use of hymns, chanting, and even classical music and opera to assist in prayer.

In “Praying the Beads Without the Beads,” she offers opportunities for prayer while grocery shopping, waiting in traffic or a doctor’s office, doing laundry, and other everyday situations. In this and other chapters, she infuses her writing with humorous true stories from her life, like “Jesus and Tomatoes Coming Soon.”

Her chapter, “Homework: Life as a Set of Prayer Beads,” contains the story of her experience having a panic attack and checking into a psychiatric facility, which she wrote about in her essay for A Second Blooming. She also writes about the business she started, renovating homes in a historic district here in Memphis, offering a strong parallel between her rehab in the psychiatric facility and rehabbing these houses:

And, as trite as it is to say, we are all, of course, rehabs. Every moment. Every day. Even when we seem to be stuck out in some endless, parched desert, our hearts and souls cracking and dying of thirst, we’re handed the gift of starting over. Failure simply means an opportunity to begin again. We get to wrench out those old, rusted nails we worked so hard to hammer in crookedly, pull out the warped boards, and try once more to hammer a straighter nail. Every day.

BEAD BY BEAD would make a wonderful gift for Easter or Mother’s Day or… just because!

2 thoughts on “Bead by Bead: The Ancient Way of Praying Made New (a book review)”