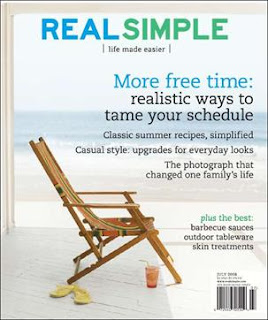 Real Simple Magazine is running its first ever Life Lessons essay contest. I’ve been a fan of (and subscriber to) Real Simple since its very first issue, and have often mused, after reading the monthly Life Lessons column, on what I might write if given the opportunity. Well, here it is, with a September 9 deadline, so I’ve got plenty of time to ponder, write, revise, and even run my drafts by my two writers critique groups for feedback before polishing my entry, right?

As I began the process this weekend, I realized right away how easy it would be to get stuck in the first step and end up never writing the essay! While “pondering” the theme of the contest—“What was the most important day of your life?”—I decided that I was going to have to define “important” before I could proceed.

You see, I mentioned the essay contest to my husband and he immediately said, “July 13, 1970.” That’s our wedding anniversary. And yes, it’s definitely way up there on the “list” of most important days of my life. I could also throw in the dates that we adopted our three amazing (now grown) children as candidates for the essay, back in 1977, 1984 and 1985. And how about March 14, 1987—the year I was Chrismated into the Orthodox Church—which was the culmination of a seventeen-year spiritual journey? Or, if I wanted to be technical about the most important day in my life, how ‘bout March 8, 1951, the day I was born?

You know, the Orthodox Church commemorates its saints on the day they died, rather than the day they were born. It makes sense, when you consider that the story of our lives on earth isn’t finished until we die. Many there are who lived lives of debauchery or hurt many people by their violent acts or their greed, only to make a huge change of heart—a “repentance”—before dying. Some of those people touched many others by their death, bringing healing and peace.

On the other hand, I’m sure there are those whose lives look pious and loving throughout many years, but might not continue to the end, giving up, like the athlete who doesn’t finish the race. So, it seems that caution should be used before lauding the living.

How does that apply to writing an essay about “the most important day of your life”? Just this: I don’t believe that I’ve experienced that day yet. It could be today. It might be another thirty years or more. As a cancer survivor since 2001, I was given the opportunity to consider, if only briefly, what that day might hold, and how I might fare when faced with imminent death. I was given a reprieve, as surgery proved to be a cure. And yes, maybe I did live a little more gently for a while, until I passed the oncologist’s “safety mark” of five years.

But if this criterion is used for the essay, that the day of our death is the most important day of our life, the only folks deserving of entering would be those on death row or nearing the end of their battle with disease. And since I’ve been involved in caring for six people during their final days, maybe I do have an advantage…. maybe I’ve been allowed a glimpse, through their eyes, of what that day will be like.

So yesterday I set about to begin my research for writing this essay. Here’s how I began: Define “important.”

The contest rules didn’t say to write about the “happiest” day of your life. Maybe “important” could also mean the most tragic day. The instructions did say it could be “a day noted for its poignancy or its hilarity,” and gave examples of the day you started your dream job or left a bad work situation.

So, I looked up “important” at the Merriam-Webster online dictionary where they give, as the primary definition of “important,” this:

“marked by or indicative of significant worth or consequence: valuable to content or relationship”

After staring at the definition for a while, I went to one of my writer tools, the Visual Thesaurus, and that’s when the search got really interesting. Four of the alternate words offered for “important,” with their meanings and examples are:

of import—of great significance or value—“important people,” “the important questions of the day”

crucial—of extreme importance; vital to the resolution of a crisis—“a crucial moment in his career,” “a crucial issue for women”

Now I find myself at a crossroads. How I choose to define “important” will definitely impact the “event” I choose to write about in the essay. So, the next layer of research that I lay down is to go back and read as many of the Life Lessons columns as I can. I generally save one year of back issues at a time, but every issue doesn’t contain this column. So far I’ve read about six Life Lessons columns, looking for a hint of what the editors at Real Simple are after. Some of my more puritanical writing buddies would say that this is a very superficial, consumer-oriented approach, and that I’m selling my soul by trying to please an editor with my writing, rather than pleasing myself. I get that. Only problem is, I’m not the one giving out the $3000 prize money for the winning essay. Nor am I the one with the power to get this essay published in a magazine with a huge circulation. So yes, I care what the editors think.

So now I’m remembering what David Wroblewski said during his reading at Camp Square Books this past Wednesday in Oxford:

“Writing a novel is like dumping everything you’ve got into a pot and stirring it up…. Writers are artists who make their own clay, and the name of that clay is The First Draft.”

That was the sound of me throwing my clay into the wheel head. Next I’ll have to work the clay with my hands, finding the center, defining its boundaries, shaping it and smoothing it until hopefully, it becomes a work of art. In this case, a 1500-word essay that skillfully portrays to the world what I consider to be the most important day of my life. Or most crucial. Or most authoritative. Or most significant. Or the day of most significant value. Or the day having the greatest effect or meaning. Or influence. Or….

Whirrrrrrr…. That’s the sound of the potter’s wheel turning. You can watch a video of this process here . Looks like dirty business to me, but Flannery O’Connor called writing “dusty work.” Hmmm… I’d better go change out of my Sunday dress first.