My friend—the talented writer Karissa Knox Sorrell from Nashville—has a terrific blog where she often “rants” about issues of faith and spirituality. Karissa is a convert to Orthodox Christianity, like me. Her post yesterday, “A Tent in the Wilderness,” was all about various ways Christians often try to squeeze our faith into boxes and then spend lots of (negative) energy defending what’s inside of them. I share some of Karissa’s frustrations about this practice. As she says:

The Christian faith has been reduced to argument, to fact and certainty, to proofs and defenses. I can’t wade through it all anymore. We’ve tried to contain God inside all of our human semantics and projections, but he is too big for that. I long to sense him away from all the theologizing and theorizing. I want to know him simply, naturally, without fuss and pomp.

How does she plan to pursue that? By seeking God in what she calls the “wilderness” or the “wasteland.”

Her words remind me of a story I recently read again. It’s attributed to Carl Jung though I think variations of this tale have been spun by others. The story is about, as Sally Thomason says in her book, The Living Spirit of the Crone, “how the ineffable spirit of the divine is too often lost by established religions.” 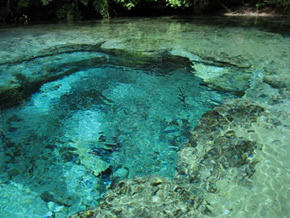 The story goes that a small group of people discover a spring of life-restoring water in a forest. They quickly tell others about its miraculous power, and so more and more people begin to gather around it on a regular basis. Then they pile rocks around it to protect it from “outsiders” and eventually build a large edifice and only welcome like-minded people. Eventually they begin to consider outsiders as enemies. They are so busy protecting the spring that they fail to notice that it has dried up. Jung’s story goes on to describe another group of people in a different part of the forest who make a similar discovery.

The problem is that for every tent up on a mountainside, there’s a tent in the valley, claiming that its place is better.

In order to escape this spirit of exclusivity, Karissa writes about heading to the “wilderness” or the “wasteland.” I’m not quite ready to join Karissa in those places, and I have to wonder whether others might follow her there and she would be faced with another group circling their tents. But I do appreciate her “rants.”

2 thoughts on “Faith on Friday: Circling Our Tents”