My friend Ellen Morris Prewitt—who also happens to be a gifted writer and published author and anthology editor—has a wonderful Lenten practice. Every day during Lent she posts a short paragraph on Facebook that begins, “I saw God today.” And then she goes on to explain where she saw Him. She ends the post with the hash tag #Lent2015, so folks can follow the thread on Twitter if they so desire. Ellen is in rehab for hip replacement surgery, so she published this post from the waiting room at her doctor’s office yesterday:

in the patients patiently waiting in the waiting room, trusting that whatever pained them would be alleviated, believing despite the fact that ultimately it is only ever a reprieve ‪#‎Lent2015‬

I saw God today
in my husband’s hands as he pressed into place the covering to protect my incision. “Let’s get out all your bubbles,” he said, gently checking his work. The covering crackled. His palms smoothed, done. ‪#‎Lent2015‬

I decide to join her. For Ellen, Lent began on Ash Wednesday, as it did for most Western Christians. I’m Eastern Orthodox, so our Lent begins next Monday on “Clean Monday.” But I began my God-sightings yesterday, posting this from my iPhone while waiting to get my hair done:

in the face of a young semi-homeless man I’ve known since infancy…. Saw him waiting at a bus stop. ‪#‎Lent2015‬

I visited that young man when he was in prison last year. And before that I helped him with a few things he needed for his (temporary) apartment. I pray for him whenever I remember. And now when I see his face, I see the face of God. 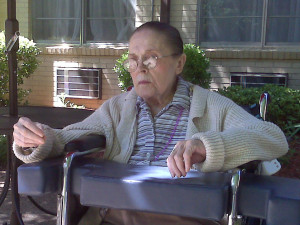 Today is my mother’s birthday. She is 87, so she just outlived her mother—who also had Alzheimer’s—by one year. I’m going to visit her in the nursing home in Jackson (MS) tomorrow and take her some new clothes I got for her yesterday. She won’t know who I am or understand what a birthday is, but hopefully the bright-colored blouse and the visit will cheer her. Rubbing lotion on her hands and kissing her forehead and singing to her also seem to get through the twists and tangles. Who knows. But this much I know: when I see her I face, I’ll see the face of God.

We see God in the faces of all of his creatures—especially when they are in need, or when we feed them, clothe them, shelter them, or show them love in any way. The Scriptures teach us that, but so does simple human compassion. 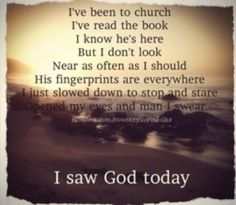 We also see God in the faces of those who participate in those same acts of mercy towards us, as Ellen shared in her first post. I saw God every day during the months following my car wreck in 2013 when I slept in a hospital bed and couldn’t do much of anything without the help of my husband and friends. I saw Him in the untiring care my husband gave to me. I saw Him in the cheerful faces of those who visited, sat with me, and brought us meals.
George Strait saw God today.