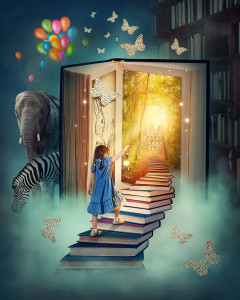 Corey Mesler has a wonderful article in Change Seven (an online journal) called “Why Iris Murdoch?” Corey loves Murdoch… says she’s his favorite writer. That’s big praise from this prolific reader, writer and owner of the oldest independent bookstore in Memphis, Burke’s Books. One thing that I keep returning to in this short piece is his description of the place of “enchanters” in her writing:

Murdoch usually inserts an enchanter into the action, into the semi-mundane lives of her characters, an enchanter, who, by necromancy or perversity or strangeness or boldness, changes things for everyone. They are narrative catalysts.

I immediately emailed Corey when I read this, excited to suddenly see “enchanters” in books I’ve read recently. Like Robinson Davies’ book Fifth Business. Mary Dempster is surely the enchanter in this story, as she propels the story forward even from her place in the background over many years. And in Marilynne Robinson’s Houskeeping—where Sylvie serves this purpose in the narrative.

My writing group is having an email discussion right now about what one member of the group calls “the importance of intentional reading” for writers. She wrote this in response to a section another member quoted from a Walter Mosley book as an example of some pretty amazing prose. I haven’t read Mosely, so I quickly looked at some other sections of his work and was immediately captured by his words here in The Further Tales of Tempest Landry:

“It was true. The hegemony of the divine hung by a slender thread, dependent on the whim of Tempest Landry’s errant soul. After being shot down dead in the streets of Harlem, he refused to accept his sentence to eternal damnation. His ability to evoke his free will threatened all that has ever been known as true.”

The editor I’m working with on revisions feels that Neema isn’t as fully realized as the other main characters. My task is to integrate her into their lives more fully. I’m struggling with how to make this work, but I understand that she needs to be a “narrative catalyst” if she is to lay claim to her place in the book. She needs to change people either by “necromancy or perversity or strangeness or boldness.” I think it’s by strangeness. But also by necromancy, as she connects the lives of these contemporary women who discover their common bonds.

As I continue work on the book, I’m so thankful for the insights of the gifted writers in my group and for the generosity of authors like Corey Mesler, from whom I continue to learn. It’s so important to sit at the feet of those who are paving the way.