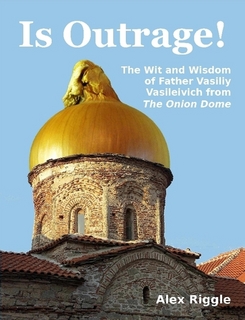 My friend, Alex Riggle, has a wonderful blog called “The Onion Dome.” His daily posts about the saints are filled with historical information, spiritual wisdom, and—this is what sets his site apart—kickass humor. Alex also published a book called Is Outrage! It’s a collection of posts from the early years of The Onion Dome, and it’s a great read. Alex links to his daily posts from the Dome on Facebook, so you can keep up with him there, or subscribe to his blog.

I was thinking about Alex’s humor on Tuesday when he did a post about Saint John of Shanghai and San Francisco, also known as Saint John Maximovitch. 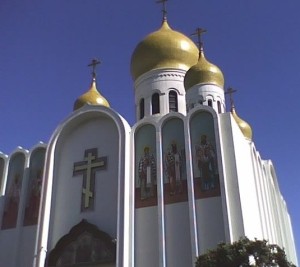 And then my friend David Twombly posted a picture of Holy Virgin Cathedral “Joy of All Who Sorrow,” in San Francisco. Saint John’s relics are at that cathedral.

So I commented on the picture, asking David if I ever told him the story about the first time I visited the cathedral. He said no, but he reminded me of my promise to tell him over drinks some time. I hope he will forgive me for not waiting, because I’ve decided to share the story today.

I can’t remember the exact year—it was about 1995. My husband, Father Basil, is also a physician, and we were in San Francisco because he was speaking at the annual meeting of the American Society of Hypertension. One day when he had a few hours off from his meeting, we took the bus from our hotel downtown out to the cathedral, where we planned to venerate the relics of Saint John. I had prepared for the visit by bringing a few items I wanted my husband to bless on Saint John’s reliquary. We had read that his relics were incorrupt, and I was both nervous and excited about our pilgrimage.

One reason I wanted to make this pilgrimage was because Saint John took care of hundreds of orphans and fought for human rights. I read that he sometimes served at the altar barefooted because he frequently gave away his shoes to poor people while walking to church.

No one greeted us when we entered the cathedral. It was a weekday and there weren’t any services going on at the time. We immediately noticed a coffin in the middle of the nave and approached it cautiously. There were no velvet-covered ropes to keep visitors from touching it, and no glass partition above the body. We crossed ourselves and made prostrations before the coffin, and then stepped even closer, preparing to place the items for blessing on the body. But what we saw both shocked and confused us.

Not only was the body completely incorrupt, it was also very light-colored and fleshy, as if the saint had breathed his last very recently. Tears came to my eyes as I contemplated how miraculous this was. And then it struck me as odd that he didn’t have a beard and wasn’t wearing priestly garments. I had read that bishops’ faces were usually covered with a chalice aer (cloth) for burial, but this man’s face was in full view. Just as my husband and I began to discuss these things quietly, a priest walked up behind us.

“Are you here for the visitation?”

“The visitation?” I asked.

“Yes. For the deceased.” (I think he said an actual name of the man who had died, but I don’t remember. It was Russian.) 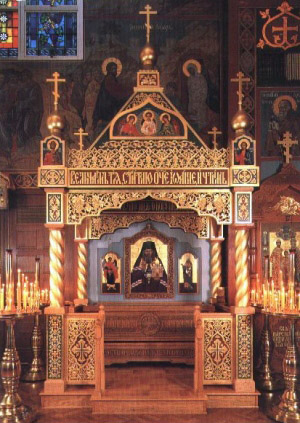 Of course we were embarrassed but somehow managed to introduce ourselves and tell the priest that we had come to venerate the relics of Saint John. He smiled and showed us to a reliquary over against the wall on the far side of the cathedral. As soon as we saw it we were doubly embarrassed. How could we have mistaken the plain coffin in the middle of the nave for a reliquary? Blessed Saint John was visible under glass, his entire body covered, except for his hands, which were dark brown but clearly still covered in flesh. My eyes filled with tears as I placed a few items on the glass and prayed quietly before my husband said prayers of blessing for those items. I felt a love for this saint who lived humbly but courageously, always putting others before himself. It was my first experience of this sort, and one I will never forget. 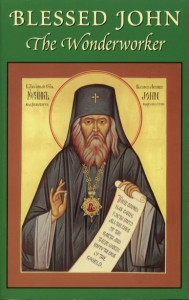 The man in the middle of the nave was being buried the next day. My husband would be in meetings, but I decided to return to the cathedral. It was early in our conversion to Orthodoxy, and I had never been to an Orthodox funeral. Archpriest Peter Perekrestov, who wrote this article about witnessing the opening of Saint John’s relics in 1993, over twenty-five years after his death, was celebrating the funeral. He also wrote the first book about his life, Blessed John the Wonderworker, which we purchased at the cathedral.

At his invitation, I rode with Father Peter from the cathedral to the interment, and then to his house to meet his wife and children. In many respects he was warm and welcoming. But he couldn’t resist lecturing me about the “slippery slope” my husband and I (and all the rest of the people from the Evangelical Orthodox Church who had cast our lot with Antioch back in 1987) were on because of our membership in the Antiochian Archdiocese. Father Peter was part of ROCOR—the Russian Orthodox Church Outside Russia. He talked to me (yes, “to” me, not “with” me) about our foolish decision to join a church that didn’t follow the “old calendar,” and other inferior aspects of our chosen jurisdiction. For the most part I listened quietly. Well, maybe not for the “most part,” as he pushed some of my buttons with his attack.

As we returned to the cathedral where I would catch a bus back to my hotel, I couldn’t help but wonder what Blessed Saint John would think about Father Peter’s words to me. And about the fact that my husband and I had “landed” on a different branch of the tree of Orthodoxy. It’s been almost twenty years since that conversation, and I can only hope that we have all grown up quite a bit since then.

3 thoughts on “Faith on Friday: My First Meeting With a Saint”