I met J. C. Sasser at the 2018 Pulpwood Queens Girlfriend Weekend last month in Nacadoches, Texas. She was on a panel with one of my favorite authors and friend, Nicole Seitz, and a new author-friend Brenda McLain. Their work was described as “southern gothic,” a genre that J.C. said she wasn’t familiar with until her work was described using the term. She was talking about her debut novel Gradle Bird.

After I got home from the weekend I looked up “southern gothic” to learn more about this genre. Here are a couple of definitions:

The stories often focus on grotesque themes. While it may include supernatural elements, it mainly focuses on damaged, even delusional, characters.

Benjamin Fisher’s definition of the literary Gothic as something that evokes “anxieties, fears, terrors, often in tandem with violence, brutality, rampant sexual impulses, and death,” and it becomes clear how the tradition of the Southern Gothic plays into already established ideas about the South as an “ill” region. 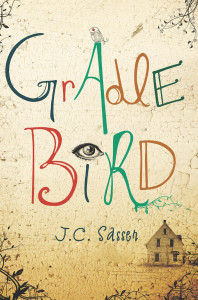 When I was visiting with J.C. after the panel, I told her that I thought the protagonist of my novel Cherry Bomb, “Mare,” and her protagonist “Gradle” would be good friends if they knew each other. After finishing reading Gradle Bird this morning, I still believe they are kindred spirits, but they move in very different spiritual realms. Where Cherry Bomb’s pages are filled with weeping icons and art and graffiti and nuns, Gradle Bird’s are lush with ghosts and mental illness and the rural South’s unique brand of Christianity. Both books have plenty of darkness—abandonment, trauma, and what the author Anne Lamott would call “love in the intergenerational ruins.” And both have varying degrees of redemption for some of the characters.

As I read I couldn’t help but think of another author whose work captivated me a few years back—Haven Kimmel. Especially her books, Something Rising, and The Used World, and Iodine. Sasser, like Kimmel, captures southern noir with great depth and artistic skill. And of course there are obvious comparisons to be drawn to O’Connor, Lee, McCullers, and Faulkner.

Sasser worked as a dishwasher, waitress, and cook at truck stop off Georgia’s I-16 when she was twelve, so she comes by Gradle’s character and the book’s setting honestly. But I’d love to know how her amazing imagination came up with the Japanese fighting fish, the brilliant schizophrenic, and the ghost living in the attic. I won’t share more of the plot (no spoilers here) so you’ll have to read the book to experience Gradle’s wild and heart-rending adventures. It’s definitely worth the read! Congratulations, J.C., on a terrific debut novel!