While Western Christians are less than two weeks away from celebrating Easter, Orthodox Christians all over the world are just beginning their Lenten journey today—on Clean Monday. I made it to Forgiveness Vespers last year, but not last night. It’s complicated. But my reluctance to jump into Great Lent wholeheartedly has something to do with longing for a life that isn’t so… heavy.  That may surprise those of you who know me well enough to know that I’m all about intensity and embracing the dark side of life. But when it comes to God and Orthodox spirituality, I struggle with the heaviness of the season, at least the way it often comes across in parts of the Orthodox world.

If you’re tired of reading my rants about fasting, you can just skip the rest of today’s post, because I’m going to do it again. But don’t worry, it’s going to be a much lighter rant than in the past. 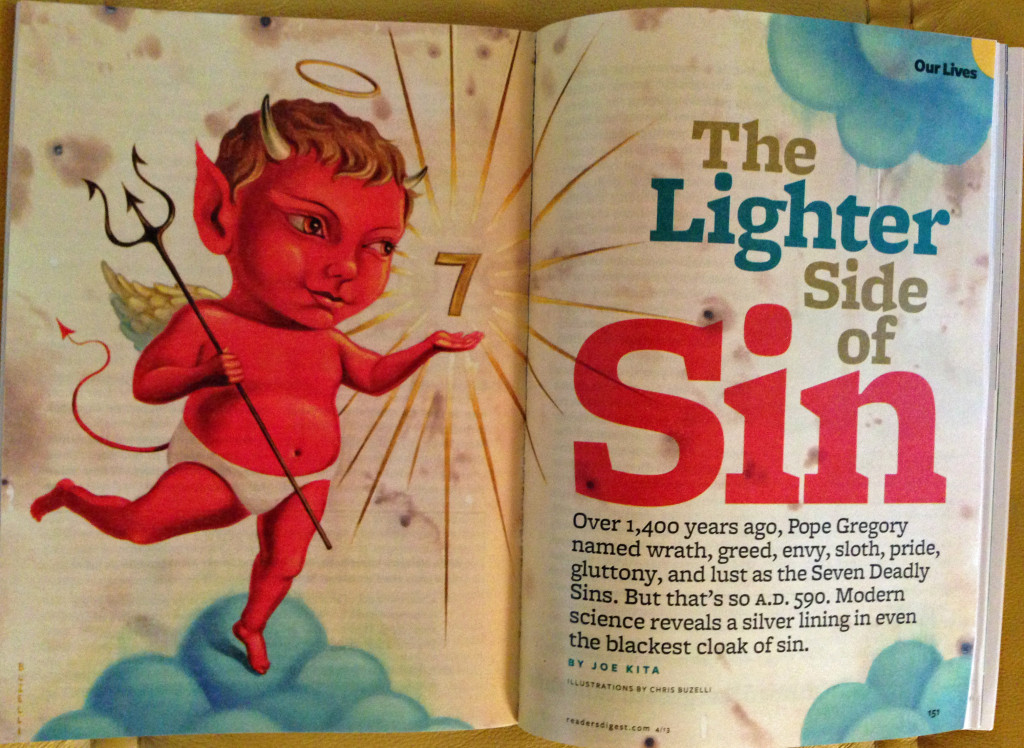 With excerpts from a surprising (and completely secular) source: the April issue of Reader’s Digest. Joe Kita has a piece in the “Our Lives” column called, “The Lighter Side of Sin.” He breaks down the seven deadly sins—wrath, greed, envy, sloth, pride, gluttony and lust—giving each of them a slightly scientific spin and revealing their lighter sides.

Here’s a taste: (Some are quoted, others are paraphrased.)

Wrath—The chronic suppression of anger can cause high blood pressure, heart disease, depression, and sleep disorders, studies show. … If you’re married, a little bit of wrath might even save your life. A report from the University of Michigan determined that couples who regularly got problems off their chests lived longer than those who internalized them.

Greed—Materialistic greed can have positive effects. Research shows that when you’re pursuing and acquiring what you desire, you feel great. This has the potential to benefit not only you personally, in the form of happiness and health, but also those around you, including family, friends, and depending on your business, shareholders and society…. It’s basic human nature to feel greed. Whether it’s a sin depends on the limits we place on it.

Envy—Dutch researchers recently determined that benign envy, which lacks the venom of its poisonous big sister, (malicious envy) motivates us to improve.

Sloth—Richard Wiseman, a British psychologist who measures pedestrian walking speeds around the world, says the human race has sped up ten percent since the 1990s. But where is all this hurrying getting us? Taking it slow may have benefits, like weight loss. Adults sleeping five or fewer hours per night have a 55 percent greater chance of being obese.

Pride—Although pride is regarded by some as the original deadly sin, achievement-oriented pride creates feelings of optimism and worthiness. It is motivational, resulting in greater perseverance and personal development. It can even change physical appearance, prompting more smiles and better posture.

Gluttony—Thirty-six percent of American adults are obese, so it seems there could be no upside to gluttony. But scientists at Tel Aviv University discovered that adding a little dessert to an otherwise balanced breakfast facilitates weight loss. A cookie at breakfast or an occasional cheat meal can keep you from going elbow-deep into a bag of chips before bedtime. (He explains this better in the article, but I do think this was the weakest of his 7 arguments.)

Lust—Research at the University of Amsterdam (why does the location not surprise me?) shows that lust helped study subjects focus better on the present and its details. Kita admits that lust for sex can certainly be destructive, but a lust for life is virtuous. Like all the Seven Sins, what determines whether it’s deadly is a simple matter of whether we control it or it controls us. 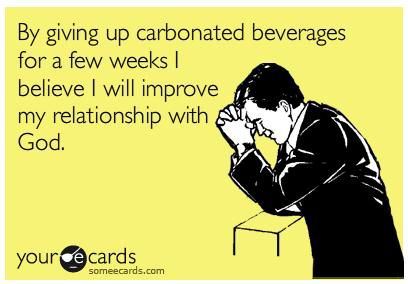 I think Kita nailed it on the head with that final sentence. The Lenten Fast (and all of the spiritual lifestyle promoted by the Orthodox faith) aims at control—our control over our flesh, rather than the other way around. I do get that. It’s not the goal I take issue with—it’s the method. The rules and regulations just don’t help me draw closer to God. I know some Orthodox Christians who are greatly helped by the same regimen that undoes me, so my thoughts are just that—mine.

And the results of Kita’s lighter approach to the seven deadly sins might not even be things that you consider “good” goals for Christians—longer life, health, happiness, improved marriage, weight loss, perseverance, good posture, personal development, material success—but I appreciated his thoughts. 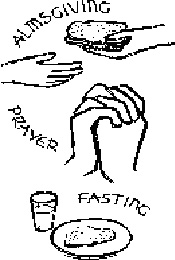 What I do like about the Orthodox approach to Lent is how fasting is only one third of a three-pronged “stool” that, as our pastor said yesterday, won’t hold up without all three legs. I embrace (anonymous) almsgiving and I try to pray (in secret) but it’s the fasting that keeps tripping me up.

If you’re in the throes of a serious ascetic struggle, please don’t take offense at the lighter approach I’ve introduced here. But if, like me, you struggle with the heavy cross of self denial in the seemingly legalistic form of which foods not to eat on which days (and the endless “fake foods” and recipes to make fasting taste good) I hope you can take this post in the spirit in which it’s shared, and find the lighter side of Lent. And please forgive me.