A few months ago I read this post by an Orthodox blogger, Benedict Seraphim, on why the Orthodox faith may appear “tougher” than the traditions followed by those of other Christian churches, especially our Protestant friends. And while I can appreciate some of what Benedict Seraphim shares in his post, I’m not sure I can fully embrace his conclusion that the reason Orthodoxy may seem difficult is because of our pride. Of course it goes against the grain to admit we are weak and that something is hard for us. But I think I’m asking a different question. The question on my heart today (and for some time) is this: “Why does God want us to suffer in order to draw near to Him? Why does it have to be so damn hard?”

Of course I know the Scripture verses that explain this, and I’ve read volumes by the Church Fathers on the subject. I get it, on some level. But my heart is struggling with it. Especially as we enter one of the four great fasting seasons of the Orthodox calendar. November 15 was the beginning of the Nativity Fast, which lasts until December 25. (In America we are given a break for Thanksgiving Day, which some of us stretch to include the weekend… or else what would you do with all the leftovers that aren’t allowed during the Fast?)

If you’ve been reading my blog very long, you’ve already heard some of my previous rants on this subject, including:

“The Violent Bear it Away,” about the fast during Great Lent, before the celebration of Pascha (Easter).

“The Dog Days of Summer,” which is about the fast before the Feast of the Dormition of the Mother of God, in August.

“F is for the Fast that God Has Chosen,” a post during the series on the Lenten alphabet I shared during Lent a few years ago.

Last weekend I was in Little Rock for another book reading/signing for Circling Faith: Southern Women on Spirituality, this time with co-editors Wendy Reed and Jennifer Horne. The event was held at WordsWorth Books, a wonderful indie bookstore in the Heights, a neighborhood of terrific boutiques, art galleries, coffee shops, bars and restaurants. Jennifer is a Little Rock native, and it was fun meeting her family and friends. I especially enjoyed candid conversations “on the side” with several people (men included) who are “circling faith” in their own way.

We were even invited to her sister’s book club on Sunday night, where we were treated to fabulous food and more good conversations with a lovely, diverse group of women.

But the thing I didn’t see coming last weekend was my experience on Sunday morning. I was visiting my friend, Daphne, who is also Orthodox. But we decided to go with her sister and brother-in-law to their church on Sunday, and afterwards to a wonderful lunch at the country club. They attend St. Andrews Church, which calls itself “A community of God’s Grace and Healing.” Saint Andrews has Anglican roots, but with a modern touch. Actually, the 8:45 worship service is billed as “more traditional” with hymns set to traditional tunes. But we attended the 11:00 a.m. service, which is “more contemporary… with hymns set to modern accompaniment and the newest songs of praise.” For most of my Orthodox life, I have not liked contemporary Christian music. I can’t explain why, exactly, except that it has always felt like a hybrid of sorts. My heart had been tuned to embrace the Byzantine music of the Orthodox Church (with no musical accompaniment) for worship, while my psyche still loves a variety of secular music, especially country music, folk music, and some rock and roll and alternative. But I have kept those genres—the spiritual and the secular—neatly separated for many years.

So when we walked into the sanctuary and I heard the guitar, piano and drums on the stage to the left of the altar area, I wasn’t sure how it would feel. We entered the pew next to Daphne’s sister and her husband, and I watched the joyful expressions on everyone’s faces as they sang these beautiful praises to God. The church itself has huge windows that look out into a wooded area. The leaves were brilliant. A storm was coming in—the one that would herald the end of those colors. I found myself in tears from the first song, and throughout the entire service. The pastors were also joyful men, and their words as they led us in praise blessed me on many levels. It was as if something that had been locked away inside me for many years was being set free. I couldn’t figure it out at the time, but I think it has to do with the disconnect between my Western roots and the Eastern religion that I have been immersed in for 25 years, officially, and over 40 years from the time I left my Protestant evangelical roots in search of this historic faith.

I’m sure my Orthodox friends who are reading this—especially the clergy—are thinking, “it’s all about the emotions.” And yes, my emotions were definitely involved. I think that’s one reason we don’t use musical instruments in the Orthodox Church. The music is supposed to be “other worldly”—like the icons and the church architecture—it’s all supposed to take us somewhere else, into the spiritual realm. And the historic Byzantine hymns, the prayers and the Scripture reading are supposed to be done in such a way that they aren’t left open to individual interpretation. And yes, I kind of got that, when the saxophone player came in with a beautiful riff during a song of praise to God, and it was kind of sexual. Yes. When I closed my eyes to listen, I could imagine being in a smoke-filled bar with a martini and a handsome man. And then I would open my eyes and remember that we were worshiping God. But maybe I had that struggle simply because I’ve tried to keep those parts of me separate for so many years—the emotional, earthly, feeling part of me, and the spiritual, other-worldly part. 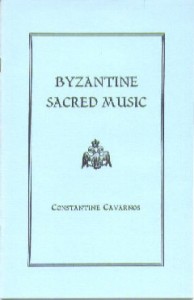 Constantine Cavarnos, in his book, Byzantine Sacred Music, says, “The aim of Byzantine sacred music is spiritual. This music is, in the first place, a means of worship and veneration; and in the second place, a means of self-perfection, of eliciting and cultivating man’s higher thoughts and feelings of opposing and eliminating his lower, undesirable ones.” So maybe the saxophone wasn’t helping me eliminate my lower, undesirable feelings. But I can’t help wondering if I heard it played in such a worshipful atmosphere on a regular basis, I wouldn’t always associate it with a “lower” realm. Just wondering.

And if you’re wondering what all this has to do with my original topic for this post—fasting—well, it might seem like a stretch. Except that my experience on Sunday morning brought to mind these words from Isaiah:

“Is this not the fast that I have chosen:
To loose the bonds of wickedness,
To undo the heavy burdens,
To let the oppressed go free,
And that you break every yoke?
Is it not to share your bread with the hungry,
And that you bring to your home the poor who are cast out;
When you see the naked, that you cover him,
And not hide yourself from your own flesh?
Then your light shall break forth like the morning,
And your healing shall spring forth speedily,
And your righteousness shall be before you;
The glory of the Lord shall be your rear guard.”

Still don’t see the connection? It just makes me wonder if my “healing shall spring forth speedily” if I don’t “hide yourself from your own flesh?” God knows my flesh. It loves to hear a good saxophone. And to be with people who are joyful. And it doesn’t mind sharing with the hungry and the poor. But it sure does struggle with the rules about not eating certain foods on certain days, and only having centuries-old music from foreign countries in our worship services. Forgive me.

2 thoughts on “Faith on Friday: Why Does It Have to Be So Damn Hard?”