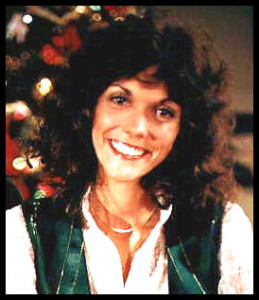 On this rainy Monday just before Christmas, I’ve got a song on my mind that isn’t exactly a Christmas carol.

Last week I watched a TV special about Karen and Richard Carpenter. I loved their music back in the late sixties and seventies, and was devastated by Karen’s death from anorexia at age 32. As Richard said on the special last week, little was known about eating disorders back then, and by the time Karen went in for treatment, it was too late and she died. I’ve never known what drove her to anorexia—there were only vague references on the show about the stress she was under with her career. But I found myself weeping as I watched her sing “Rainy Days and Mondays,” one of my favorite of their songs. Especially when she sang this verse:

What I’ve got they used to call the blues.

Nothing is really wrong.

Walking around, some kind of lonely clown,

Rainy days and Mondays always get me down.

My mother used to say she was “blue.” I think it was her generation’s term for depression. Or maybe for feelings that could grow into depression or just sit there on the soul like a mild sadness. Sadness as an emotion doesn’t have to become malignant. But sometimes it overpowers us. And for some of us it’s often there. As Karen sings:

What I’ve got has come and gone before.

No need to talk it out,

We know what it’s all about….

Did she? Did she know what it was all about? 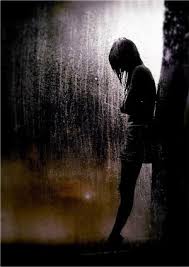 I remember a time in my thirties when I wished I had anorexia. Yes. It was becoming prevalent in the news and although I struggled with bulimia and body image distortion and exercise addiction for many years, most of all I wanted to be skinny. And free of my food and body issues. I became severely depressed on and off during that time, and to this day those feelings can overwhelm me at a moment’s notice. But as I’ve gotten older I’ve learned to deal with my emotions better—and my food cravings.

Anorexia is about control. I’ve always had control issues, and since control is pretty much an illusion (how many of us really have control over our lives?) those of us who crave it look for ways to tamp down that craving. Or we look for areas in our out-of-control lives where we can create order. Controlling what we eat is one of the ways that we sometimes seek out. Even as I continue the 1000-1200-calorie diet I’ve been on for three and a half months (and I’ve lost 15 pounds!) I recognize the high I get when I punch my calories into my LoseIt! app on my iPhone and stay under my limit for the day. And the euphoria when the scales register even another half pound loss is greater than the pleasure of a favorite food or drink. Most of the time.

What a journey I’ve been on most of my sixty-four years. I’m thankful for my spiritual life, which helps moderate my tendency towards emotional and behavioral imbalance. I still go over my calorie budget occasionally, and some days I give in to that martini that tips the balance a bit too far. But the good days are becoming more frequent than the bad ones, and for that I am thankful.
Even on rainy days and Mondays.