Last Monday I reflected a bit on Brene Brown’s wonderful book, Daring Greatly. And then I strapped my courage on and did what she recommends—I entered the arena. We all choose whether or not to enter the arena every day. And sometimes many times each day. That arena can be interactions with family members, friends, or co-workers. It can be new, or continued, struggles with addictions, depression, or other mental or emotional challenges. It can be the battle for our souls as we wrestle with God or His angels, or chase down demons. It can even be the arena of our own minds as we battle shame and self-doubt.

As I prepared to read part of my essay for The Shoe Burnin’ Anthology at the event on Saturday night, an opportunity presented itself that thrust me into the arena. I was asked to read the essay for an audio recording on Saturday afternoon. The plan is to produce a CD of our stories, songs, and interviews that will be included with the book when it’s published. So I sat down in a quiet little guest house in front of a microphone and began to read. No one else was in the room except for Nashville singer-songwriter, Lari White, who was doing the recording. Lari is a lovely woman. Beautiful, lively, and engaging. She sat on the floor—literally at my feet—and listened intently, only moving slightly to make adjustments on her laptop. I had read the essay aloud at home, but not to another person.

“Dressing the Part” will be the first time my stories of sexual abuse will be published. I wasn’t prepared for how powerful the words sounded coming from my voice. After the recording, Joe Formichella—Fairhope writer who is editing the anthology—joined us for an informal chat about my essay and his thoughts on continued revisions. Lari also recorded our talk, which struck me as strangely intimate. Joe kept calling it “our project” which was comforting, and yet also scary. His name was on the line, as well as mine.

After the recording was done, Joe encouraged me to basically give an impromptu reflection on the essay during the Shoe Burnin’ which would be commencing in a couple of hours. I had brought three pairs of shoes to toss into the fire: a pair of Mary Janes for my 5-year-old self; a pair of hippie sandals for my 20-year-old self; and a pair of black high heels for my mid-20-year-old self. The memories I would be burning went back to the 1950s and then up through the 1970s. 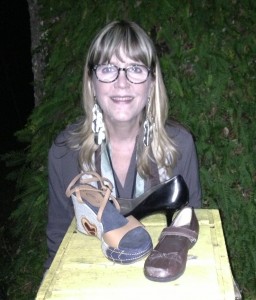 I’m not good at impromptu speaking. But somehow I stepped into that arena—where about 30-40 people were gathered in lawn chairs around the huge bonfire—and shared a short summary of my story. Then I read the final page of the essay aloud. Most of the stories and songs people were sharing that night were humorous. Or at least upbeat. I was worried that mine would be a downer, although Joe had assured me it was good. After reading the final paragraph, I picked up the shoes—one pair at a time—and threw them into the fire. And with each toss I metaphorically flipped off the person who had stolen my innocence, beginning with my grandfather when I was four. I had told Joe I didn’t want to be emotional at the burning. That it was about the art. But at that moment, under those beautiful, ancient, moss-laden oak trees and the starry sky above them, I found my voice in a way I had never experienced. “Fuck you!” I yelled, as I tossed each pair of shoes into the fire. The crowd was silent, and then someone on the other side of the fire said, “Yes!” And my self-doubt and shame was greeted with applause. And then several people came over to hug me. One woman just held me in her arms for a long time.

I’m not sure that seeing my story in print is going to be any more cathartic than that reading at the Shoe Burnin’ in Waterhole Branch, Alabama. But I hope that it will give courage to others who have similar stories to tell. And similar shame to get over.

This morning, as I continued my reading in Ann Lamott’s book, Help, Thanks, Wow, I found this passage, which helped me bring my Shoe Burnin’ experience into the realm of thankfulness:

“… God will restore what the locusts have taken away…. We are hurt beyond any reasonable chance of healing. We are haunted by our failures and mortality. And yet the world keeps on spinning, and in our grief, rage and fear a few people keep on loving us and showing up…. In the face of everything, we slowly come through…. We come to know—or reconnect with—something rich and okay about ourselves. And at some point, we cast our eyes to the beautiful skies, above all the crap we’re wallowing in, and we whisper, ‘Thank you.’”

Thank you, Shari Smith, for inviting me to participate in the Shoe Burnin’.

Thank you, Joe Formichella, for your wise and compassionate editing.

Thank you, Lari White, for your sensitive and tender presence as you recorded my story.

Thank you, Suzanne Hudson (and Joe) for your boundless hospitality, as you opened your home to this group of musicians and writers and our friends who came to share this experience.

Thank you to the other writers and musicians who shared their stories on Saturday night, and to the friends who gathered around the fire with us, including my friend, Circling Faith editor, Jennifer Horne (whose story was my favorite one of the night!) and another friend, Jennifer Paddock, Fairhope author who came out to listen and cheer us on. (I’m sorry I don’t have pictures of the other shoe burners… it was dark and kind of hard to capture the images. I loved Michael Reno Harrell‘s story, and enjoyed his music all weekend, especially “The Too Late Lounge,” from his Cd, “Then There’s Me.”) And I loved the music (and friendships offered) by Chuck Cannon, Chuck Jones, and Chris Clifton.

Thank you, Ren Hinote, my Fairhope writing buddy who opened her home to me for the weekend, came to The Shoe Burnin’, and treated me to a fabulous brunch at the Grand Hotel in Point Clear on Sunday. I hadn’t been to the Grand since 1975, when my husband and I spent our 5th wedding anniversary there. Lots has changed, but the ambiance and the view are still fabulous.

Thank you, NancyKay Wessman, and Susan Marquez, my dear writing buddies from Jackson who came down to support me. And to my new friend (also from Jackson) Phyllis Geary, who was in Fairhope on business for her art gallery in Jackson. Phyllis offered a compassionate ear during our late night talks and morning coffee times in Ren’s kitchen.

Thank you, God, for safe travels alone on country roads at night, for a weekend free of illness and full of clear-eyed sobriety. It’s not that I didn’t enjoy a little whiskey and wine, but somehow God gave me grace to enter the arena without numbing my fear and insecurity with too much alcohol. I think I’m finally getting the “thanks” part of Lamott’s book. Maybe I’m ready to move on to her final section—“Wow.”