That wonderful quote was featured in an article in the June 13 issue of Time Magazine, which came out a week early, of course. But June 13 is our wedding anniversary—we will celebrate our 46th next Monday. I was going to write this post on that date, but we’ll be in New Orleans, so I’ll probably just share a couple of photos next Monday. 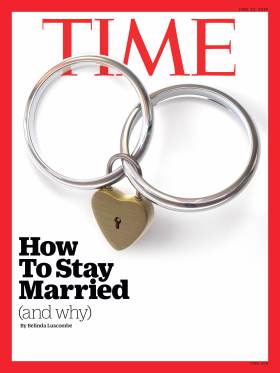 The Time Magazine article, “How to Stay Married (and why),” by Belinda Luscombe, editor at large at Time, explores the institution of marriage from several angles. From a mental health point of view, many of us think, as Luscombe shares in her article, that marriage “should—and could—provide the full buffet of satisfaction: intimacy, support, stability, happiness and sexual exhilaration.”

Those benefits might not all be present in many marriages today, but research shows that while the long-married couples agree that marriage is hard, they also agree that it’s the best thing in their lives. Luscombe says:

For those who can stay the course, indicators that a long marriage is worth the slog continue to mount. Studies suggest that married people have better health, wealth and even better sex lives than singles, and will probably die happier. Most scholars agree that the beneficial health effects are robust: happily married people are less likely to have strokes, heart disease or depression, and they respond better to stress and heal more quickly.

Bill and I were young when we got married—I had just turned nineteen and he was twenty-one. And of course we’ve had our good times and our struggles, as anyone has if they stay together through all of life’s challenges. Luscombe offers suggestions for making this staying together business not only viable, but enjoyable. Referring to Gary Chapman’s book The 5 Love Languages, she encourages married couples to

figure out what specifically makes your partner feel loved. (According to Chapman, it’s probably one of five things: words, time, kindly acts, sex or gifts.)

I can see how Bill and I have learned this over time—especially the words, which I think we have turned from effort to habit, frequently saying things that build the other person up. And kindness is a huge deal as we grow older. It’s probably one of the words I would use to describe what I love most about my husband. Chapman’s next suggestion:

And the other is to learn to apologize—properly—and to forgive.

My pride keeps me from being the first to apologize sometimes, but I think we’ve both softened a great deal over the years and are much quicker to forgive, which is essential.

The most successful couples began to embrace one another’s interests.

There was a time when I resented my husband’s career. A successful physician and clinical trials researcher, he travels a lot and works from home when he’s here, which was hard when the children were still at home. I chose to be a stay-at-home mom for many of those years in order to provide some consistent parenting. Instead of being thankful for his successful career, I avoided talking about it. Many years later—after the children were grown—I began to show more of an interest in his work, and I couldn’t be prouder of him and what he is accomplishing. Whereas I once asked him about his work during dinner, out of politeness, I now ask out of genuine interest. And I believe his interest in my writing has also grown. These are not things that come naturally, as we are polar opposites in our career interests. On the other hand, it helps that we both love sports, music, theater, movies, travel, entertaining, and fine dining—all activities we are thankfully able to enjoy at this stage of our lives.

The last thing that Luscombe mentions in her article that caught my attention was this piece of wisdom, also from Gary Chapman:

Another helpful adjustment is to drop the idea of finding a soul mate. ‘We have this mythological idea that we will find a soul mate and have these euphoric feelings forever,’ says Chapman. In fact, soul mates tend to be crafted, not found…. And how do you make a soul mate? Practice, practice, practice.

The concept of a soul mate is one that I believe more women than men consider. Maybe that’s because of how we’re wired. As Luscombe says:

One of the more controversial ideas therapists are now suggesting is that men need to do more of the ‘emotional labor’ in a relationship—the work that goes into sustaining love, which usually falls to women.

In my parent’s generation, a good husband was someone who provided well for the family and was faithful to his wife. My generation has wanted more—sometimes to the detriment of relationships that might have grown into something sustainable without these expectations. I think there’s lots of wisdom in Luscombe’s article, and today I am so thankful that Bill and I stuck it out during the hard times. I can’t imagine not being married to him, and I miss him when he’s traveling. I was seventeen the first time I fell in love with him. This time it’s even better. I’m looking forward to as many more years as God allows us.