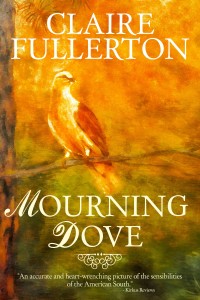 How fun it was for me to read Claire Fullerton’s wonderful new novel, set in the social milieu of the Memphis Junior League, the Garden Club, the Memphis Country Club, and the city’s most elite private schools in the 1980s. I actually lived just a neighborhood away from the house where Camille (Millie) and Finley Crossan grew up, but my kids went to public schools in the late 1980s and 1990s, and we weren’t part of the upper echelon of the social fabric of Memphis. But I knew about it. And Fullerton captures it beautifully in her novel MOURNING DOVE, written through the voice of Millie, beginning in her teenage years and moving into her tumultuous time as a young bride.

But Fullerton doesn’t just capture the more polite elements of society in Memphis. She reaches into the heartbeat of the music industry, first in North Carolina, where Finley goes to make a name for himself, and later back in Memphis, as Fullerton says:

“Inside the dark clubs lay the gritty underbelly to my mother’s genteel Memphis, which Finley ferreted out in that serendipitous, inexplicable way that magically comes to boys in the process of finding their footing.”

Their mother Posey—beautifully drawn in her fashionable southern style, surrounded by antique plates, Chinese Foo dogs, and Wedgewood urns on every space of her well-appointed house—plays bridge, hosts sip-n-sees and lunches with friends at the country cub. She has left their alcoholic father for “the Colonel,” a selfish bully who never endears himself to Finley and Millie. They never stop loving their father. Fullerton describes him through Millie’s eyes:

“My father found God out of doors. He felt Him viscerally in nature, His mysteries descended upon him as intuitive inner-knowing. My father’s universe was lit up in symbols and talismans that guided him onward through the fog of life’s riddled path…. There are some men too gentle to live among wolves, and the dichotomy of who he was versus who he tried to be got him in the end.”

I loved the scenes of the teenagers dancing down at Tom Lee Park by the Mississippi River, and the music fest at Memphis University School, where the guys mingled with the girls from Hutchinson. But these happier times weren’t to last, as Finley succumbs to drugs and eventually loses himself in a self-led cult. No spoilers here, but things turn dark as the novel progresses. As his friend Luke says about him at one point:

“Intellects like Finley tend to reach for the edge. It’s like this earthly level of consciousness isn’t enough for a guy like him. He has to reach for more, know what I mean?”

Millie worships her brother. He is her talisman through life in their broken family and the changing society in which they live. Fullerton does a beautiful job of capturing Millie’s inner dialogue throughout the book:

“Finley once said the whole meaning of life is to learn how to master ambiguity. It’s life’s choices that scare me the most, those crucial crossroads that direct or redirect the course of a life. And what settles me to no end is the recognition that the choices that shape our lives are not always of our making. Sometimes we’re on the bitter end of somebody else’s.”

More than a coming-of-age story or a multi-layered family saga—and it is both of those things—MOURNING DOVE is a cautionary tale wrought with beautiful prose and gut-wrenching truthfulness. Readers will fall in love with Finley and Millie, and will root for both of them until the end. And yes, we are also sympathetic towards their mother Posey. A jewel of a novel.

Oh and here’s a bonus, the audio book is narrated by the author herself, who worked as a DJ for a rock and roll radio station when she lived in Memphis. We’ve all got a treat in store!