>In considering what gift I might offer to my readers this Christmas, I immediately thought of this wonderful ekphrastic poem, “Nativity,” by my friend, Scott Cairns. It’s actually the first of two parts of his poem, “Two Icons,” which is published in his wonderful book, The Compass of Affection. Two years ago I did a post about Cairns and a spiritual writing workshop he led in Oxford in 2009, which I was blessed to attend. 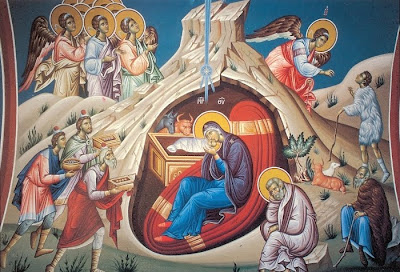 Since the poem is ekphrastic, I’m including an icon of the Nativity here as well. There are many excellent ones, but this one has most of the elements Cairns reflects upon in his poem. (It’s missing the wise men’s horses and the dog near Joseph, but you can use your imagination.) If you look at the icon for a few minutes first—prayerfully—and then read the poem aloud, slowly, letting the words fill your soul, it’s possible that the image and the words will open for you a window to Heaven.

As you lean in, you’ll surely apprehend
the tiny God is wrapped
in something more than swaddle. The God

she holds, beholds, reclines beholden to.
She cups His perfect head
and kisses Him, that even here the radiant

compass of affection
is announced, that even here our several
histories converge and slip,

just briefly, out of time. Which is much of what
an icon works as well,
and this one offers up a broad array

of separate narratives
whose temporal relations quite miss the point,
or meet there. Regardless,

one blithe shepherd offers music to the flock,
and—just behind him—there
he is again, and sore afraid, attended

by a trembling companion
and addressed by Gabriel. Across the ridge,
three wise men spur three horses

towards a star, and bowing at the icon’s
nearest edge, these same three
yet adore the seated One whose mother serves

from an attentive dog whose master may
yet prove to be a holy
messenger disguised as fool. Overhead,

the famous star is all
but out of sight by now; yet, even so,
it aims a single ray

directing our slow pilgrims to the core
where all the journeys meet,
appalling crux and hallowed cave and womb,

where crouched among these other
lowing cattle at their trough, our travelers
receive that creatured air, and pray.

P.S. I really love Coptic icons, so I’m including several below for your enjoyment. And… I just found this short video of Coptic icons being written in the UK. I’m not usually a fan of contemporary Christian music, but I love the song in this video.

Christ is Born! Glorify Him! 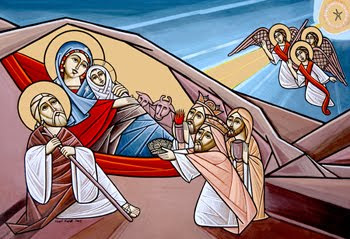 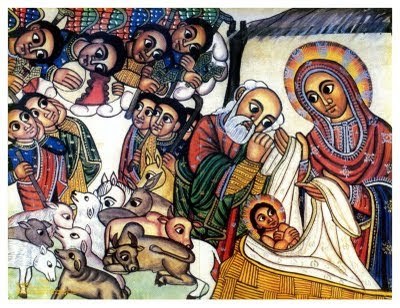 1 thought on “>Nativity: The Radiant Compass of Affection is Announced”