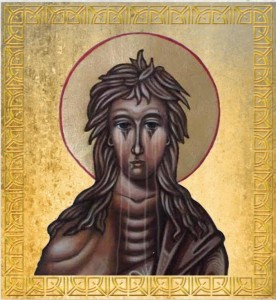 This is a big weekend for those of us who take Mary of Egypt as our patron saint, and for many others who look to her as a model of repentance. In the Orthodox Church, she is commemorated twice during Great Lent every year: April 1 (tomorrow) is her feast day, and the fifth Sunday of Lent, which falls on April 2 this year, is known as the Sunday of Saint Mary of Egypt. So, I’ll say “happy name day eve” to my sisters in Christ who are also her spiritual namesakes.

If you’re interested in reading more, here are some previous posts about St. Mary of Egypt:

“Holy Mother Mary Pray to God For Us” (From 2015, this post contains a prayer/poem I wrote to Mary of Egypt many years ago.)

My novel, Cherry Bomb—which will be published this fall—focuses quite a bit on Mary of Egypt. There’s even a weeping icon of Saint Mary in the book, although I’ve never actually heard of one of her icons weeping. More often it is icons of the Mother of God that weep. (But it’s a novel, after all.) I’m excited that this image (above, right) will appear on the back cover of the book when it comes out. It’s a detail from an icon I wrote over ten years ago. My daughter-in-law, See Cushman, cropped it from the original and added the “tears” to make it appear that the icon is weeping, and the graphic designer working on the cover changed the background to gold and added the frame. I couldn’t be more pleased with the result, although my photo is a bit fuzzy and doesn’t do the image justice.

Today I thought I would share a sneak preview from Cherry Bomb. The following excerpt is from a scene in which Mare (protagonist) and Elaine deKooning (her art professor) are attending an opera about Saint Mary of Egypt written by John Tavener. I learned about this opera many years ago from a nun who was visiting Memphis to speak at our parish’s women’s retreat, and I was able to find a CD of the music. I hope it blesses you and raises your interest in the novel, which will be out in about six months!

Holy Mother Mary, Pray to God For Us.

As they entered the Wells Theatre on Saturday night, Mare and Elaine were greeted by materials, textures, and geometric angles that were part of its Art Moderne splendor. Intricate rectangular carvings repeated themselves along the walls. Gold leaf flickered off every surface. Even the curtain on the massive stage was itself a work of art—tapestries of shimmering gold and copper. The theater seated over a thousand patrons and boasted a state-of-the-art audio system. Just listening to the orchestra warming up sent chills down Mare’s spine. The music wasn’t familiar—it had a foreign, Middle Eastern sound—but even the concordant notes the musicians struck as they tuned their instruments simultaneously had an other-worldly beauty.

“Wow.” Mare had never seen anything like this before.

Elaine smiled. An usher handed them each a program and showed them to their seats. The cover of the program featured an icon of Mary of Egypt and Zosimas. They quickly read the Composer’s Note before the overture began, which was penned by John Tavener.

Mary’s door was wide open, even though her love was misdirected and distorted …

They looked at each other as they read, and then continued to read the rest of the program notes. Mare wondered how the words were hitting Elaine. She remembered how uncomfortable Elaine had been when they visited the Coptic church. What’s she thinking now?

Zosimas’s whole sound world becomes Mary’s. In her he sees ‘love’ and his own limitations. His world, once so dry, now in the dryness of the desert, flowers into what the Desert Fathers might have called “Uncreated Eros” or a hint of the Edenic state. In controlled ecstasy, they both ask each other to give the blessing.

“That’s what’s happening in your painting, isn’t it?” Elaine whispered.

“Mary of Egypt” is the intent to create an ikon in sound about Non-Judgement. In a sense, Zosimas loves again when through Mary he can dimly see the beauty of God—and who knows how far Mary has gone in her search for the unknowable and unobtainable in her forty solitary years in the desert? Holy Mary, pray to God for us.

The orchestra finished warming up and the lights dimmed. A group of women and men formed two parallel lines on the stage, representing the extensions of Mary and Zosimas. The women’s sensual movements were accompanied by a flute, wordlessly representing Mary whoring in Alexandria. The men were accompanied by the trombone and the primordial sound of the simantron—a wooden percussion instrument used in liturgical music (especially at monasteries) and sometimes with contemporary classical pieces. Each act was more powerful than the previous, building to a climax with the aria, “Bless.” The characters of Zosimas and Mary—without their extensions from early scenes—prostrated themselves on the ground in front of each other, crying out in song the solitary word, “Bless!” over and over.

Mare wasn’t prepared for how this would hit her—seeing the story she was growing more fascinated with by the day brought to life in such a powerful way on the stage. She felt some of the anger she’d hung onto over the years melt away as the words and music worked to soften her heart. Damn. She quickly brushed away tears, hoping Elaine hadn’t seen them. Sneaking a glance at Elaine, Mare saw that she wasn’t the only one weeping.

Then Mary levitated. The angels lifted her up—with help from nearly invisible wires hung from the stage ceiling—leaving a terrified and awestruck Zosimas to grieve her loss. The opera continued with the conclusion of their story: Zosimas found Mary dead in the desert a year later and buried her with help from a lion, who appeared tame in the presence of the saint’s remains.