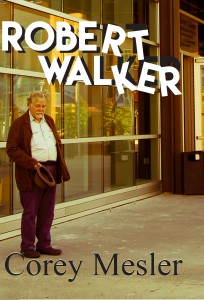 I just finished reading what will probably be the last book I read in 2016. Book number 27 (I’ll publish my list soon.) In many ways I feel like I saved the best for last.

Corey Mesler’s novel, Robert Walker, blew me away on many levels.

The Prose. Always elegant, with a strong sense of place and characters so well-drawn you feel like you know them. You love them. Or hate them. In the case of the protagonist, Robert Walker, I definitely love him, and several other characters in the novel. But there are also some pretty unlovable folks in there, too.

Robert Walker is a homeless man living on the streets (and sleeping in the parks) in Memphis, Tennessee. Having lived in midtown Memphis for 25 years, I had the opportunity to meet quite a few homeless people. They enlarged my life—whether our brief exchanges were at an intersection where there was barely time to hand them some money before the light changed, on the streets, or even at our front door. Especially when we lived on Stonewall, which was a bit of a thoroughfare between North Parkway and Poplar Avenue. I remember one cold winter in the 1990s when several homeless folks actually rang our doorbell. That was the year I decided to make a large pot of hearty beef stew, freeze it in serving-size disposable containers, and microwave each serving for anyone who rang the door. That was also the year that my husband reached out to one of our regulars—who only worked for cash his whole life and therefore had no social security—and took him to meet with a Social Security counselor to try and get him signed up. And then there’s our church—Saint John Orthodox on the corner of Tutwiler and Dickinson—which has an active food pantry for the foot traffic we have always gotten there. During the years I worked as church secretary, I had the blessing of handing out that food on a regular basis. All of these experiences have helped me see homeless people as real people. Just as worthy of life’s blessings as I am, but somehow ending up on the short end of those blessings. 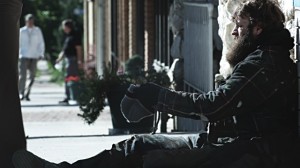 Maybe those personal experiences enhanced my love for the characters in Robert Walker. Each one of them drew strong emotional responses from me as I read about their lives. And I recognized all of the locations Mesler paints for us, which made the story have a more immediate feeling. It felt true. But this is more than a documentary. It’s a well-crafted piece of fiction. Once I started reading it this weekend I couldn’t put it down. I just finished it a little after noon today, Monday. And even though Mesler does an excellent job with his narrative arc—a plot that builds gradually, has plenty of conflict, and a satisfactory resolution—I still wanted more. Not more from the book itself, which had a poignant and powerful ending… but I was left with that great feeling of not wanting something to be over. Of not wanting to leave the people I had grown to love on the pages of the book.

(One of the characters in the book talks about the writers’ workshop she attends at Door of Hope, an actual real-life writing group led by my friend Ellen Morris Prewitt for seven years. With Ellen’s help, that group published a terrific collection of their writing last year, Writing Our Way Home: A Group Journey Out of Homelessness.)

Kudos to my friend Corey, a lover of good books, an encourager to writers, a friend and supporter of his community, an excellent poet, and a truly wonderful novelist. If you’re still Christmas shopping, add this to your list for your friends and yourself. If you live in Memphis, drop in to Burke’s Books and get an autographed copy and take a few minutes to speak to Corey and his wife Cheryl and the other great folks who work there. It will cheer your spirit. Happy Holidays!

Corey Mesler has been published in numerous anthologies and journals including Poetry, Gargoyle, Five Points, Good Poems American Places, and Esquire/Narrative. He has published 8 novels, 4 short story collections, and 5 full-length poetry collections. He is in discussion for a movie version of his last novel, Memphis Movie.  He’s been nominated for the Pushcart many times, and 2 of his poems were chosen for Garrison Keillor’s Writer’s Almanac. With his wife he runs Burke’s Books, a 145 year-old bookstore in Memphis.

3 thoughts on “Saved the Best for Last”