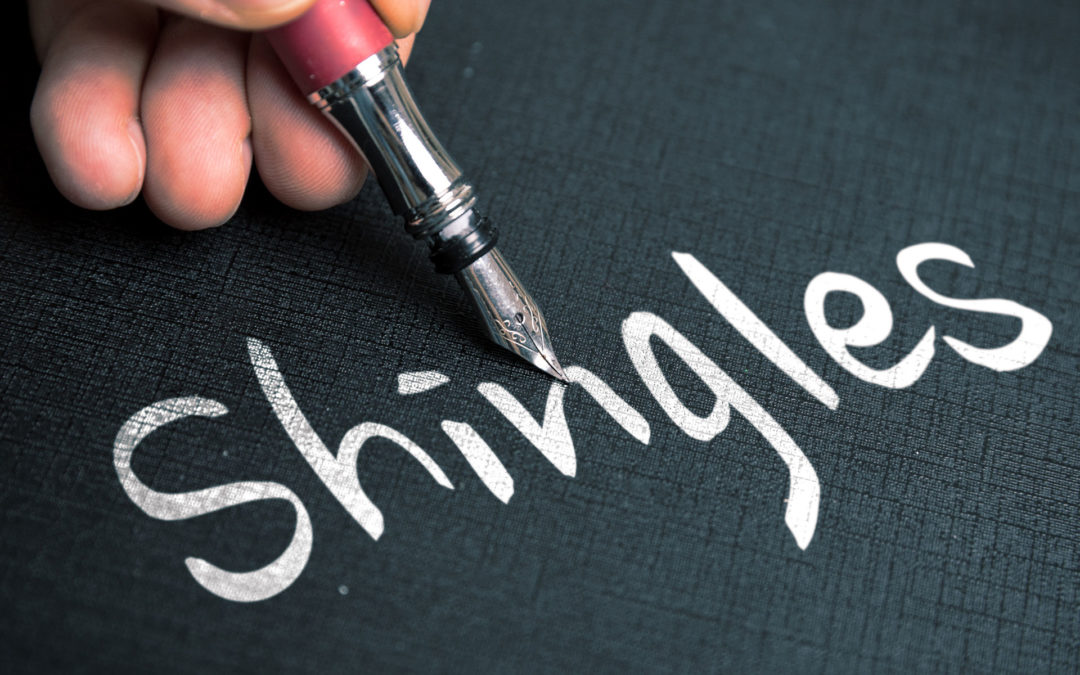 I’ve been trying to decide whether or not to blog about this, and today I finally decided that it might be helpful to others. I’ve now had shingles for almost two weeks, and although the rash has dried up, the pain is still fairly severe. (I’m not going to share photographs of the rash on my back and chest, but you can find pictures online.) I had the shingles the first time when I was sixteen, and I ignorantly thought you couldn’t get it twice, and didn’t hear my husband’s encouragements last year to get the shingles vaccine. I plan to once I’m completely well, since evidently you can get it more than twice! Read all about the Shingrix vaccine here.

Fortunately, the shingles hit during a month (February) when I don’t have any out of town trips scheduled for my book tour, which starts back up in March. I had been on the road constantly for several months last fall and again in January—speaking at over 40 events in seven states—and just as I was returning home from my last trip I got a bad upper respiratory infection. I think the exhaustion and bad cold set me up for the shingles virus, as my immune system was compromised.

So, as soon as the rash appeared and we knew what I had, I started resting . . . sleeping long hours, napping, and generally relaxing as much as possible for the first week or so of the virus. I also took a seven-day regimen of an anti-viral drug called Acyclovir during that time and allowed myself to binge-watch more episodes on Netflix and Amazon Prime in one week than I usually see in several months. Evidently the drug helps the shingles not be so severe, and possibly not last as long. Whether or not that’s true, at least I didn’t experience any side effects.

But now there is the pain. This is a different kind of pain than anything I’ve experienced before, because it’s nerve pain. It’s called postherpetic neuralgia (PHN). I’ve experienced quite a bit of ongoing pain from fibromyalgia and arthritis, as well as residual pain from breaking my neck, leg, and ankle six years ago in a car wreck. But none of the pain in my neck or leg can compare to this nerve pain I’m feeling in my chest, underarm, and back. It’s discouraging to read of the possibility that this could linger for weeks or months or years, but I’m just taking it one day at a time. And treatment? Mostly I’ve been resting and taking Tylenol.

A friend who has on-going nerve pain from a different cause called me yesterday when he read my Facebook post. He totally gets why I only want to wear the softest, lightest, shirt possible, and prefer nothing touching my skin at all. Which is doable so long as I don’t need to dress up for an activity, which I’ve only done once or twice in the past few days. He also said that for him the best “treatment” for the pain is distraction. I couldn’t agree more. On Saturday I hosted our church’s women’s Righting Group for our second meeting. It was so encouraging that I completely forgot about the pain until the meeting was over.

On Monday I went out shopping for Valentine’s gifts for our four granddaughters. I spent three hours altogether, at a bookstore, then Target, then wrapping and shipping the gifts to Colorado and Arizona. It was so much fun that I barely noticed the pain until I was finished and returned home. When I’m sitting in a chair or reclining to watch TV or read, I’m more aware of the pain . . . unless the TV show or the book are really good! When I’m at my computer—as I am now writing this post—I’m also less aware of the pain because my brain is engaged in doing something creative, or at least productive. Thankfully I’ve been able to sleep through the night most nights so far.

I know I said I didn’t have any road trips planned for February, but there’s always the unexpected, right? My husband and I are headed to Atlanta tomorrow for a nephew’s funeral. I’m no longer contagious, and I love to drive, so I’m hoping it will be another “distraction” for the pain. I love being with my husband’s family—in-laws and nieces and nephews and great-nieces and great-nephews. Of course we are mourning our nephew’s death but I would be even sadder to miss sharing the loss together with family. We’ll be back on Saturday or Sunday, so hopefully I’ll post something again next week. I’m sorry to have been away from here for so long, but now you know why!

I’m excited that next Wednesday I’m invited to meet with a local book club whose members are reading my novel CHERRY BOMB as their selection for February. This is my novel that came out in August of 2017, so I’m thrilled that readers are still showing interest in it. This book club meets over lunch at a different restaurant each month, and I’m happy that we’ll be dining at one of my local favorites, Char. Stay tuned for a report, and thanks, always, for reading. Comments are welcome here or on Facebook!

4 thoughts on “Singing the Shingles Blues”