This weekend I delved into the book section of the Saturday Wall Street Journal (a favorite activity) and discovered “The Image as Event,” Ann Landi’s review of Arden Reed’s book, Slow Art. Reed’s passion for “slow art” began with his repeated viewing of Edouard Manet’s “Young Lady in 1866” at New York’s Metropolitan Museum of Art. He defines “slow art” as “a prolonged encounter between object and observer.” He contrasts this activity with the average time an American museumgoer spends with any work of art—about 6 to 10 seconds.

Reed also writes about “tableaux vivants,” which he describes as “living pictures” in which actors hold theatrical poses for 90 seconds or so, often as recreations of well-known masterpieces like Leonardo’s “Last Supper.” This art form gained popularity around 1760, waned in the 1910s, and seems to have regained steam around 1960.

But before these modern-day examples of slow art presented themselves for viewers seeking (or just needing) an opportunity to slow down and have a serious encounter with art, early Christian icons “demanded slow looking and veneration from viewers.” Later, religious processions with floats featuring tableaux vivants acting out Biblical scenes appeared. Reed ties all these into a genre he calls slow art, taking us from Malevich to Serra, and even into the fiction writing of Don DeLillo. 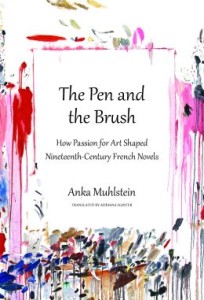 Which brings me to my second “treasure” of the weekend. I started reading the book I purchased at Ernest & Hadley Books in Tuscaloosa, Alabama, when I was there for a reading/signing for A Second Blooming: Becoming the Women We Are Meant to Be. And what a treasure—Anka Muhlstein’s wonderful book The Pen and the Brush: How Passion for Art Shaped Nineteenth-Century French Novels (translated from the French by Adriana Hunter) explores the relationship between art and literature with specific examples from Balzac, Zola, Huysmans, Maupassant, and Proust. Muhlstein chose these five authors because “each in his own way truly invented a visual style of writing.”
Balzac referred to himself as a “literary painter” rather than a writer. He enjoyed including Italian Renaissance art and Flemish painters as well as contemporary painting in his writing. He spent a lot of time at the Louvre, and his knowledge of art fed his writing. An example:

Another illustration of this genuine knowledge of paintings appears in The Peasants: as a finishing touch in describing a horrible old woman, “a hideous black parchment, endowed with movement” he adds, “her likeness is found only in David’s painting of the Sabine women,” which does indeed feature a wizened old woman as a second character.

Balzac often gave fictional characters more credibility by using a known painter’s name. Not that I’m in his league, but I chose to do this with my novel Cherry Bomb (which releases in August) by having the well known abstract expressionist painter Elaine de Kooning appear as a major character, although I fictionalized much of her story in the book.

Balzac’s ambitions include one to “paint a Delacroix in words,” and he writes at length about colors and their symbolism, especially in The Girl With the Golden Eyes, in which “Paquita’s room is bathed in red, gold, and white tones which, in Balzac’s mind, suggest inexpressible desire: “the soul has an indefinable connection with white, love is happiest in red, and gold puts passions to their best advantage.”

Muhlstein says that “Opening a Balzac novel is like walking into a museum, but a museum where the artists (and sometimes even their models) often step out of their frames to come into the story. Balzac would not be the powerful novelist he is had he settled for describing paintings and not created his own huge gallery of painters.”

I’m just now getting to the sections on Zola, Huysmans, Maupassant, and Proust, so this isn’t a complete book review. Just a preview. I can’t wait to see where these next four writers take me in their journey into the art world. I have a feeling I’ll be reading some of their novels soon….