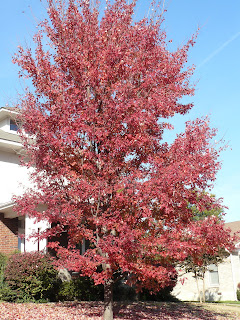 Today was just everything a Saturday was meant to be. PERFECT weather. Autumn colors peaking here in Memphis, as these gorgeous trees around midtown are strutting their stuff… a 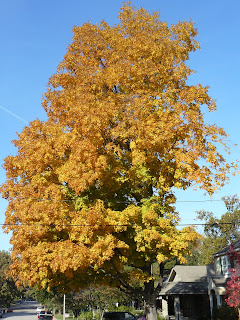 s are the purple clematis on the fence to our backyard.

Here are a few of my favorite trees, on our street and nearby. (and the clematis, below, left)

Had breakfast at Dino’s (neighborhood cafe) with hubby, so as not to mess up our kitchen, as our realtor was showing our house today. (3rd tim 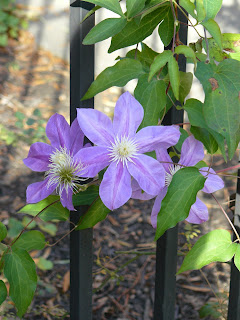 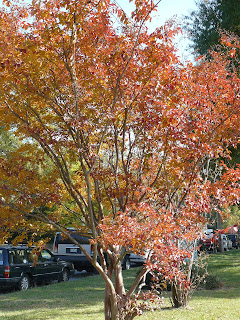 My Goddaughter, Katherine, and her husband, Hardy, have three precious children whom we have adopted as surrogate grandchildren (until the real thing comes along?)… Benji, Mary and Simon.

They all had soccer games this morning, including Simon who 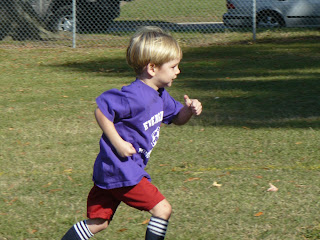 is really just 3 and not quite old enough for the team. Of course, he scored a goal.

As did Mary. (She’s recovering from her goal in this picture.) 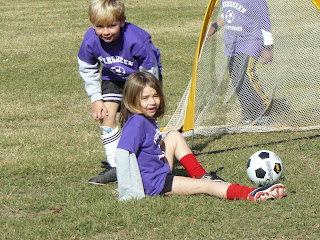 Benji is goalie for his team, when he’s not playing defense. (Here he is, in green, outrunning his opponent.) He is very protective and careful by nature, so these are both perf 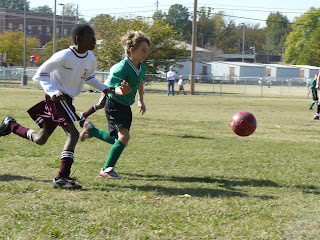 ect positions for him. I had to leave before his game was over, but I think Evergreen was holding their own when I left.

It was such déjà vu sitting at the little soccer field between Evergreen Presbyterian Church and Snowden Elementary/Middle School… on the very field my children (who are now 24, 26 and 30) used to play. In fact, Beth was “discovered” on this field… when she was playing on the first EVER Snowden Middle School Girl’s Soccer Team back in 1995. A month later she was playing for the Germantown “Storm”… a competitive team, which catapulted her “career” with the Storm, later the Fury, and the Memphis Futbol Club. Can’t resist running this picture here (scan of old pix, pre-digital camera!) … she was playing for MFC here… in 1997, I think. She’ll be 25 in a few weeks. Sigh. I really loved being a 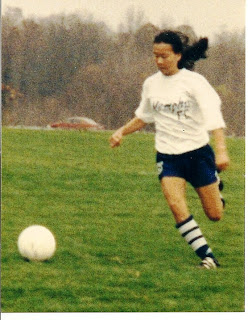 The Evergreen recreational league folks have 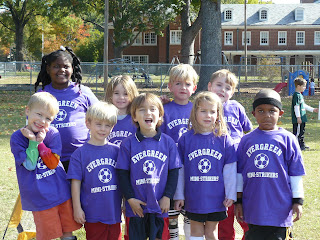 done a good thing with the young ones (ages 4-6)… The Mini-Strikers play three-on-three with no goalie. And they don’t change ends at half-time, to cut down on confusion. Sadly, one little guy did score for the other team this morning anyway. It happens. I think everyone just cheered anyway and there were smiles on all the kids’ faces, so that works. 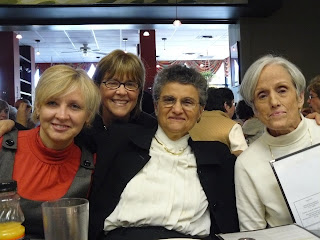 After the games I met up with my dear friend, Urania’s, two daughters, Julia and Theresa, here from New York for their mother’s 40 Day Memorial service at St. John Orthodox Church tomorrow morning. Their cousin, Toula was also here, from Charleston, and joined us. Sarah, Nancy and I, all “regulars” at 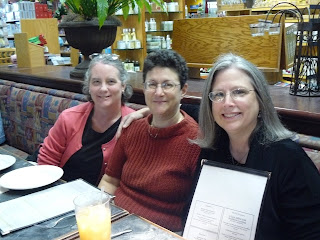 “Thursdays With Urania,” the women’s gathering in Urania’s home for the past few years, and Nellie, Urania’s main volunteer chauffeur to church this past year, all met at Bronte’s Café for lunch. We cried together as we recounted wonderful memories of our years with this dear friend, who passed away on 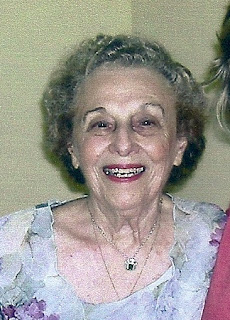 October 6. I know I ran lots of photos of Urania a few weeks ago when I was blogging about those last days I spent with her before her death, but here’s one more, taken at her grandson, Andrew’s wedding a few years ago.

There will be more tears tomorrow at church as we all sing “Memory Eternal” again… and we’ll also be thinking about our friend, Claire,’s mother, Anne Walker, who lost her battle with ALS at the young age of 51 this past week. Her memorial service was today, so it’s an emotion-packed weekend here in midtown Memphis.

As I visited with two mothers and their newborn boys this week, I thanked God for the cycle of life… for the way we can bury two amazing women we loved and celebrate the birth of two precious little boys all within a few weeks and how we can see God’s love through it all. It’s almost more intensity than I can take in at once. Maybe we’ll have a quiet week coming up. An theli o Theos. That’s Paul Elliott above and Nicholas 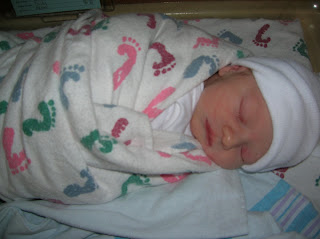 Williams, below. I’ve known their grandparents for many years…. sigh.)

Oh, I almost forgot… after lunch at Bronte’s, which is inside Davis Kidd Bookstore for those of you outside Memphis, I found these two books (The Used World and Something Rising) of Haven Kimmel’s which she autographed

e she was in Memphis (and I was in Greece)… I’m still hooked on her memoirs, She Got Up Off the Couch and A Girl Named Zippy… and will get into her novels next. But her non-fiction stuff is inspiring me… and keeping me laughing out loud and reading excerpts to my husband. I’m not usually into humor. This stuff is good. She is a gifted writer. So… yesterday I started a memoir. Swore I’d never write one. But that’s before I read Haven’s books. I’m writing in first person… but with an unusual voice… it’s through the eyes of my cat, Oreo. In fact, the working title is, Oreo Finds Her Voice. Okay, that’s way more than I would usually share this early in a piece of writing… but, as my friends know, Oreo is not your usual cat. She’s 18 (people) years old… and all I can say is, she’s seen a lot in those 18 years. Stay tuned….
Please share!