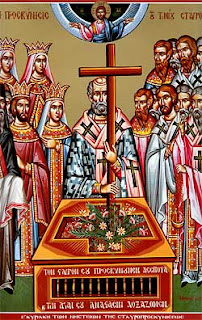 Today is the Third Sunday of Great Lent in the Orthodox Church, known as the Adoration of the Precious and Life-Giving Cross. I didn’t take pictures at St. John this morning because I had to hurry home at the end of the Liturgy to fix lunch for my husband, who had a plane to catch. Had I stayed, I would have seen the procession with the cross, adorned with dozens of bright red carnations. The tradition varies a bit from church to church, but in general, the priest raises the cross up and we all bow down and sing:

Before Thy cross we bow down in worship, O Master,
And Thy holy resurrection we glorify!

After my husband left for the airport I sat down to write this blog post, and I checked to see what I wrote about this Sunday a year ago, here. It’s interesting to note that I was having the same struggles I’m having now. It reminds me of the story:

A parishioner went to Confession and said, “Father, I’m embarrassed because every time I come to Confession it seems like I’ve got the same sins as last time.”

The priest looked at him and said, “What? You want new sins?”

So, our spiritual struggles sometimes involve dealing with the same weaknesses all our lives, whether that be a temper we can’t control, or struggles with drugs, alcohol, or gluttony. For some it might be discontent or resentment about our circumstances, which seem overly burdensome to us. All these things are part of what some people call “Carrying your cross.” 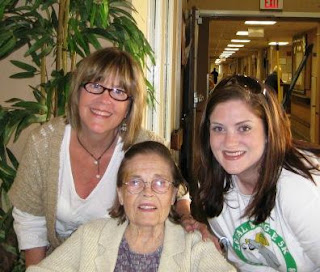 Yesterday I visited with a man who has a very heavy cross, but one who bears it well. On the way home to Memphis from the beach, I stopped in Jackson and met my niece, Aubrey, at the nursing home to visit with Mom. (Here we are—three generations.)

We sat outside in the courtyard for a while, because the weather was gorgeous, and Mom loves the birds and trees and flowers. But her mind has slipped even more since my last visit a few weeks ago. She’s had two falls, and they’ve had to put a lap guard on her wheel chair because she can’t remember not to get up and try to walk by herself. As we talked, I saw the wheels turning behind her glazy eyes, but she struggled to find the words to describe what she was thinking. At one point, she said, “You know, it’s kind of two, three, four,” and she made a motion with her hand as if she was placing items in a row on a table. “And then six, seven, eight,” the movement continued. At another point she said, “I work all day on Mondays, just going zoom-zoom here and zoom-zoom there,” and she made a motion as though turning the steering wheel of a car. “But then I can rest the other days of the week.” And then she smiled. Who knows what she’s remembering, possibly something from her very active life many years ago, when she was taking care of my brother and me, or teaching school, or helping my father run the business they owned and operated from 1982 until 1994—Bill Johnson’s Phidippides Sports.

After a while, Charles wheeled his electric scooter chair over to join us for a visit. Charles is 55. I wrote a post about him in January, here. At the time, I thought Charles’ disability had been caused by a stroke he had suffered as an adult. It was just a guess. But yesterday I learned the truth. When Charles was about 8 years old, he got sick with St. Louis Encephalitis, a virus that invades the central nervous system, including the spinal cord and brain. As Charles struggled to form intelligible words to describe his story, I watched Mother, who picked at the crumbs from the cookie I had brought her earlier, which were now stuck to the plastic wrap in a wad on her lap guard. I didn’t know if she could understand Charles’ words or not, so every few sentences, I would “interpret” them for her, to include her in the conversation.

Charles’ mind is sharp. He and Aubrey carried on a conversation about politics and the folks who run Jackson, “America’s City of Grace and Benevolence,” and their hopes for a better mayor in the upcoming election. Aubrey is a lawyer and works for the Attorney General’s Office.

At one point in Charles’ story, he told us that he almost died when he first got sick with encephalitis, and that some people might think that would have been a blessing. After all, he’s lived his entire life as an invalid, and now he’s stuck in a nursing home where most of the residents are twenty-five to forty years older than him, and only a few are capable of stimulating conversation. But he said, “Jesus saved me from death, and I thank Him every day for my life, although it’s a hard life.”

Watching him talk about his life, I notice how beautiful his eyes are—deep blue, with a twinkle. And what a handsome face he has, with nice bone structure and pretty hair. You have to look past the drooling, and his inability to make his mouth and facial muscles work the way he wants them to. His right foot had slipped off the platform at the base of his scooter, and it’s paralyzed, so he asked me to put it back up for him.

I knelt beside him and lifted his completely limp, but very large and heavy, leg, taking several tries to get it where he wanted it, next to his other foot. I thought about how humbling it was for him to have to ask me to do that, and how the nurses and aids have to take care of all of his physical needs on a daily basis. He just smiled and said, “thank you.”

So, this morning I thought about Charles’ cross, and suddenly 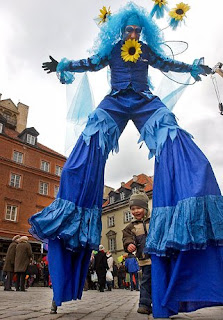 mine didn’t seem as heavy. Half-way through Great Lent, and I have not really yet begun to repent. But maybe this past week at the beach, and my visit with Charles at the nursing home, reminded me to be thankful, and thankfulness can certainly lead to repentance.

Returning to Memphis after being gone for almost a week, I couldn’t help but notice that Spring arrived while I was away. Check out these costumed figures parading on stilts as part of the Polish celebration of the vernal equinox. 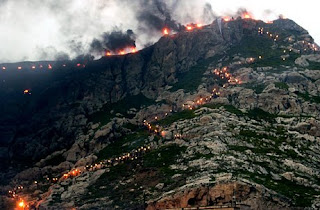 And near ‘Aqrah, Iraq, on March 20, 2007–Torch-bearing Kurds gathered in the countryside to celebrate Nowruz in Iraq, where the Persian vernal equinox celebration is marked by fire, dancing, music—and journeys into the wilderness.
But here in Memphis, at least in our yard, spring was welcomed in a less dramatic way: 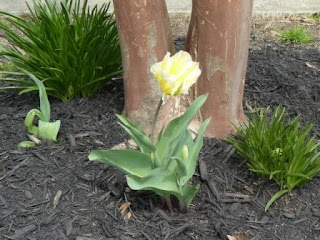 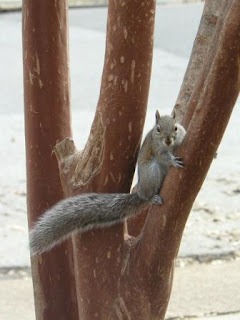 And is being watched over by this little squirrel.
The squirrel is also very interested in this bird’s nest that’s just been built on the top of this 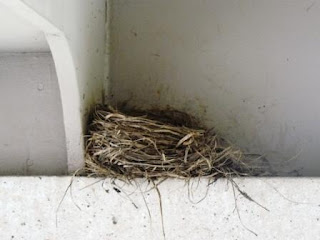 column on our porch, just a few feet from our front door. The bird flies away when I go out to take a picture, but then I can watch from the window as she comes back in to finish up with construction and rest for a spell in her new digs. Maybe I can sneak a photo when the babies are born.
And so I welcome Spring, and the second half of Great Lent, with a heart full of thankfulness. With God’s help, I will try to take up my cross with less grumbling. And I’ll try to seek humility, so the devil won’t have as easy access. In his wonderful homily at St. John this morning, our Assistant Pastor, Father Nicholas, talked about how people who walk around with their heads lifted arrogantly are easy prey for the devil, because the devil reaches up to snare us. He said the devil can’t reach down, so when we humble ourselves (at that point Father Nicholas made a gesture of bowing) the devil can’t get us. 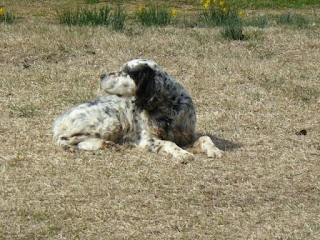 His words reminded me of something Jere Hoar told me when I was visiting on his front porch in Oxford on my birthday. It was about Daisy, his Llewellin English Setter. He told us that she had been attacked by several dogs because she carried her head in the air, acting like she was better than the others. She seems to have settled down now. Maybe she’s learned some humility. Like Charles Wilkins Walker in the nursing home. I bet the devil wouldn’t dare reach down and bother Charles.

But I’m sure he’ll be after me. So, I’ll try not to have my head in the air while carrying my cross 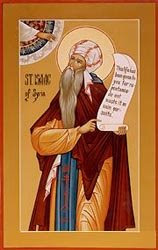 this fourth week of Great Lent. And I’ll try a little harder each day to take my sorrow straight. I’ll leave you with these words of inspiration from one of my favorite saints, Isaac the Syrian:

If you would be victorious, taste the suffering of Christ in your person, that you may be chosen to taste of His glory. For if we suffer with Him, we shall also be glorified with Him. Behold, for years and generations the way of God has been made smooth through the Cross and by death. The way of God is a daily Cross. The Cross is the gate of mysteries.

1 thought on “>The Gate of Mysteries”