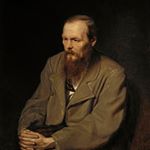 I recently came across Andrew Herman Middleton’s Facebook and Instagram pages, known as “The Zosima Society.” He also started a Facebook group called “Orthodoxy and Culture,” which currently has 288 members. The description for the group is:

This is a place to discuss how Orthodoxy influences culture, and what kind of culture is beneficial to the Orthodox spiritual life.” 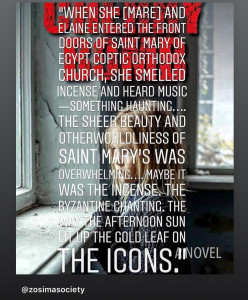 Andrew features non-liturgical artists, musicians, and writers who are Orthodox in his Instagram posts, and has recently begun a series based on my novel CHERRY BOMB, which features an Orthodox monastery, church, nuns, saints, and even weeping icons. He uses the hash tag #zosimasociety for each post, and featured the first one for CHERRY BOMB on Monday, August 6—the Feast of the Transfiguration. Here’s what his post looks like (left). Follow him on Instagram for future posts.

He is also host of the Protecting Veil You Tube Channel, home of the “Collective Wisdom Project.”  Here’s a recent interview he did with Father Stephen Freeman, “Why Did You Become Orthodox?” Andrew hopes to be in Memphis in the next few weeks and has asked me for an interview, so stay tuned.

I’m not sure how he balances all of these projects, but Andrew also has a site called “New Hagiography” which is “the ancient indie folktronica project of itinerant musician Andrew Herman Middleton.” So, what’s the New Hagiography about?

Ancient holy men and women played an important role in the history and development of Western culture, but knowledge of many of them has been  forgotten. Who were these intriguing figures, what animated their lives, what were their hopes and dreams?

New Hagiography retells their stories, beginning with the flowering of Celtic Christianity in 5th century Ireland.

I’m so happy to have found Andrew and his projects, and I hope that other non-liturgical Orthodox writers, artists and musicians will join him in sharing their work at #zosimasociety.

2 thoughts on “The Zosima Society, Collective Wisdom Project, and the New Hagiography”