>[I’m taking a break today from “A Sinner’s Lenten Alphabet,” which will return tomorrow.]

Last Wednesday through Saturday I was in Oxford (Mississippi) for the 17th Annual Oxford Conference for the Book. Last year was my first time to attend, and I knew then I had discovered a treasure, just an hour and a half from my house. 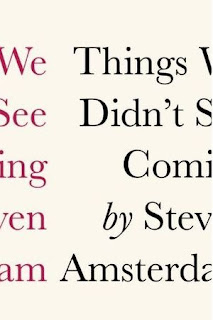 It’s a daunting task to write a blog post about such an event. It’s kind of like going on a trip to a foreign country—is it best to stop in a different place each day or spend more time in a few selected stops? I could “report” on the conference, with a glimpse into each of the speakers, panels, dinners, picnics, and workshops, but you can get that information elsewhere. Instead, I’ll spotlight a couple of things that surprised me about the conference, taking a little cue from one of the conference speakers, Steven Amsterdam, who read from his book, “Things We Didn’t See Coming.” Don’t you love the title? Okay, it’s hard not to just mention that some of the things I DID see coming were the talk by John Grisham and the “party” in Barry Hannah’s honor during the special Thacker Mountain Radio Show on Thursday night; the lovely dinner with the speakers, and the depth of the conference’s “bench”—the panelists who discussed everything from issues of racial identity to the panel of poets led by Beth Ann Fennelly. I DID see fun times hanging out with writing group buddies, Doug, Herman and Michelle, and sharing a suite with my best friend, Daphne. 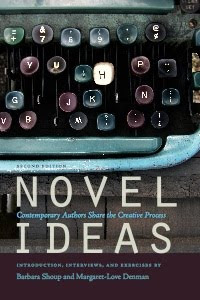 But the first thing I didn’t see coming was the treasure-trove of wisdom in the one-day writing workshop led by Margaret Love-Denman last Wednesday. Margaret is co-editor of Novel Ideas, a terrific volume of interviews and writing exercises from contemporary authors, as well as two novels and an earlier volume similar to Novel Ideas, called Story Matters. She led a one-day writing workshop with 9 participants, during which she led us through writing exercises and shared pearls of wisdom from her years as a teacher. Each of us had an opportunity to meet with her one-on-one during the conference.

On Friday I walked down the hill to The Depot, where her office is, for my 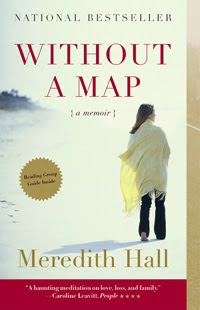 conference. I was at the point of wanting to give up on writing my spiritual memoir and do something else, after two years of trying to figure out how to write it. But Margaret “got me” and what I was trying to write in a way that no one else has. She shared a memoir with me that one of her students in the MFA program at the University of New Hampshire has published, and it blew me away. (Meredith Hall’s Without a Map.) She encouraged me not to abandon the project, and is also available for on-going editing/advising, which is an exciting option for me.

In Novel Ideas, Margaret (and her co-editor) write about finding the courage to face the material you want to write about, whether you decide to write it as fiction or memoir. They quote Theodore Weesner, who says, “Identify things that hurt, that caused pain enough to make you change how you perceive the world.”

And reflecting on Weesner:

“Your material is based on what shaped your worldview, but it is not static. It changes as you change. It grows as you grow…. The very process of writing a novel will change you. If it is a good novel, it will force you to break through some wall of not-knowing and teach you what you need to know to resolve something inside yourself.”

I’m ready to get back to work on the memoir now, thanks to Margaret’s gentle wisdom and encouragement. It doesn’t mean I won’t also pursue some other ideas I have for writing—or that the memoir might not take years to finish—but I’m at peace with that. Maybe for the first time.

The second thing I didn’t see coming was the YA (“Young Adult”) writers who presented on Friday morning. The Junior League of Oxford and Square Books contributed hundreds of copies of books for area fifth and ninth graders to read before coming by bus to hear the authors speak. Two things surprised me about these sessions: 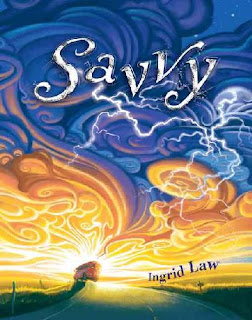 The talks given by Ingrid Law and Watt Key were exactly what I needed to hear to inform and inspire my own writing. Recently I’ve been playing around with an idea for a YA book, and their artistry kicked my interest up several notches. Ingrid Law’s first book, Savvy is about a girl named Mississippi. It’s also about what it means to be 13 and in 5th grade. But it’s also about the world of our imagination, as her characters receive their “savvy” on their 13th birthdays and learn to use their new powers. She talked about what’s needed to write a book—specifically courage, research, hard work, and imagination—and I would add perseverance, since she was rejected by 45 agents before finally getting published. 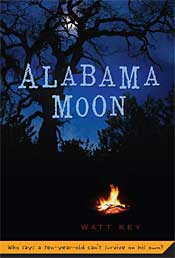 Key’s first published book, Alabama Moon, is actually the 9th novel he’s written, which is another message to me about perseverance. During both authors presentations, I was so impressed, watching an auditorium full of 5th and 9th graders, who acted more like they were watching a favorite movie or music star, rather than an author. They each held their copy of the author’s book in their hands, and eagerly jockeyed for the chance to stand up and ask questions at the end of the talks. It reminded me of this group of Ocoee Middle School Students participating in this video: “Gotta Keep Reading.” YOU MUST WATCH THIS!

And the third thing I didn’t see coming? When I travel I love to take time to pursue things that aren’t on the agenda, to get to know the area better. While relaxing at High Point Coffee one morning, I picked up a copy of the latest “Invitation Oxford” magazine, which featured “Art in Oxford.” I was needing an inner artist date, so when I read the article, “Symbols of Culture,”—about the public art in and around Oxford—I knew I wanted to take a little “side trip” during the book conference. 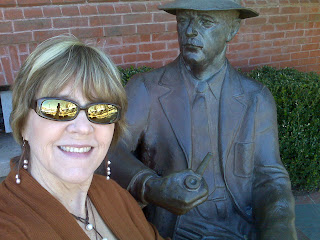 It started with a visit to City Hall (to pay a parking ticket) where I chatted with “Mr. Bill” on the bench in front of the building—a statue of William Faulkner by Mississippi sculptor and adjunct professor of art at Ole Miss, Bill Beckwith. As I sat there with my latte, I remembered an encounter I had with Mr. Faulkner 40 years earlier. As a freshman English major at Ole Miss, I wrote a paper about “The Sound and the Fury.” I’m pretty sure I just made most of it up, since I didn’t then—and don’t now—have a clue what Faulkner was saying!

Later, walking around campus, I discovered “The Quest” in front of the Old Chemistry building, an abstract piece by Alabama artist Branko Medenica.

And finally, I asked my friend, Daphne, if she would go with me to the 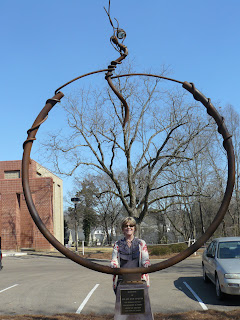 University Museum to see the newest piece on campus, Memphis artist Roy Tamboli’s Bardo of the Rose. It was conceived as a tribute for the sufferers of Alzheimer’s and their caregivers. The artist lost his father to Alzheimer’s. Here’s what he says about the work: 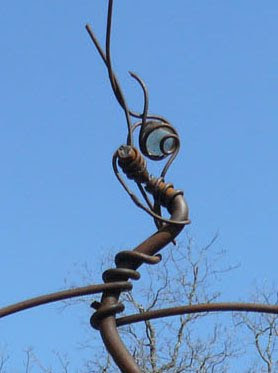 “The ring in the piece represents the circle of life. The break in the ring speaks of the gap in relationships created by the disease itself and the patient’s loss of memory. The gap is bridged by coils representing the dedication and devotion of the patient’s caregiver.

“The twisted coil near the top symbolizes the stress and trauma of living with someone who has Alzheimer’s. Finally, the glass globe at the very top represents the pearl of joy found in the surrender of acceptance.”

If you read my blog regularly, you know that my mother has Alzheimer’s, so this piece is especially meaningful to me. If you’re interested in reading more of my posts about my mom, and also about Alzhimer’s and art, here are a few links:

Not Becoming My Mother

So, I ended my four-day stay in Oxford by visiting the University Museum and then sitting up on the balcony at Square Books reading some of my new treasures on Saturday afternoon. A final dinner on the square with my friend, Daphne, and I headed home to Memphis, inspired by the things I didn’t see coming and comforted by the old familiar people and places that become more precious to me with every visit to Oxford, Mississippi.