>If you’re not an Orthodox Christian, what I’m about to say might sound very strange. But every

now and then, the liturgical calendar for the Orthodox Church deals out what could be considered a “triple threat”…. or maybe a “hat trick,” depending upon your personal ability to sustain three significant commemorations at one time. Kind of like keeping several balls in the air at once, without dropping any of them. A liturgical juggling act. That’s what we did today, on the Sunday of the Samaritan Woman. Which is also the day we commemorate the Third Discovery of the Head of the Forerunner and Baptist John, and the day known as “Midfeast”—which marks the half-way point between Pascha and Pentecost.

I realized what we were in for at Great Vespers last night, when the hymns and verses introduced all three elements of the liturgical day, which, for Orthodox, begins at sunset the evening before. The choir added a few verses about John the Baptist that weren’t in our hand-outs, and omitted some that were… a sign that some last-minute juggling might be going on. See, if we were in a monastery, rather than a parish church, nothing would be left out. The services would just be longer, to include all the verses for every event and person being commemorated. For most of us lay people with varying degrees of spiritual ADD, that would be a “triple threat,” for sure! But for lovers of lengthy services or even sinners like me who on any given Sunday might have a hankering for this amazing poetry (yes)… it can, indeed, be a spiritual “hat trick.”

In the middle of the Feast, O Saviour, fill my thirsting soul with the waters of godliness, as Thou didst cry to all: If anyone thirst let him come to me and drink! O Christ God, Fountain of our life, glory to Thee.

This theme of “thirst” was reiterated at Liturgy this morning, with this verse (among others) to Saint Photini, the “Woman at the Well,” or the Samaritan Woman:

When the compassionate Lord came to the well,
The Samaritan woman asked him, saying,
Give me the water of faith, O Giver of life
That I may take the water of baptism for delight and for salvation;
O Lord, glory to Thee.

I’ve been thirsty recently. Maybe because I’ve felt a little depressed, emotionally. And a little lonely, socially. Some of that is just a writer’s life, and I accept that. And some of it is kind of a spiritual “cycle” that I seem to move in, because of my immaturity, or maybe my love of the flesh, or both. I told a friend the other day that I was needing to seek Christ’s face, and not just reflections of Him in myself. So I went to my church on Friday and sat in the nave for a while to pray. Sure, you can seek Christ anywhere. But sometimes you can get a clearer view in Church. So I listened to the prayers (Sixth Hour Prayers were being prayed) and tried to join in with my heart and voice… and took deep breaths, wanting to smell the incense… to be reminded that our prayers arise in His sight as incense. And it was like a glass of cold water on a hot and thirsty day.

Now I’m stretching to find a segue here … feeling a need for symmetry… for my blog post to follow the hat trick theme throughout. So… I’ll throw three balls up in the air and see what happens: here goes: whoosh—liturgical and spiritual stuff…whoosh—New York Times articles… whoosh—poetry.

As I write these words, I’m thinking about an article I read in today’s New York Times 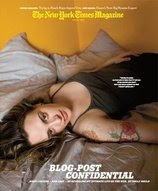 Magazine by Emily Gould, called “Exposed.” It’s about her experiences as a blogger, and eventually her job as an editor at Gawker. I cringed as I read some of her words, because they reminded me of how I feel sometimes when I’m blogging:

I think most people who maintain blogs are doing it for some of the same reasons I do: they like the idea that there’s a place where a record of their existence is kept—a house with an always-open door where people who are looking for you can check on you…. Sometimes that house is messy, sometimes horrifyingly so. In real life, we wouldn’t invite any passing stranger into these situations, but the remve of the Internet makes it seem O.K. Of course some people have always been more naturally inclined toward oversharing than others. Technology just enables us to overshare on a different scale…. As nerdy and one-dimensional as my relationships with these people [onlne] were, they were important to me. They made me feel like a part of some kind of community, and that made the giant city I lived in seem smaller and more manageable.

Bingo. I feel that sense of community that she’s talking about. And also the part about having a record of your existence. But I also get the part about oversharing and I’m definitely guilty of that. Gould goes on to talk about what she calls the “will to blog”:

The will to blog is a complicated thing, somewhere between inspiration and compulsion. It can feel almost like a biological impulse. You see something, or an idea occurs to you, and you have to share it with the Internet as soon as possible. What I didn’t realize was that those ideas and that urgency—and the sense of self-importance that made me think anyone would be interested in hearing what went on in my head—could just disappear.

(She’s talking here about losing the “will to blog.”) I’m sure there’s a great deal of ego involved here (for me) in blogging. And instant gratification. And it’s not even as though I get lots of comments on my blog, because I don’t. (I get quite a few emails… like most of my readers aren’t interested in seeing their words on the world wide web.) 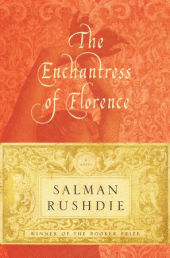 There was an article in the New York Times (the paper, not the magazine) today about Salman Rushdie and his new novel, The 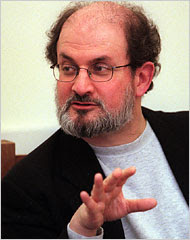 Enchantress of Florence. Interesting read, but it was the final paragraphs of the story that interested me most:

Regardless of whether he is writing about politics, Mr. Rushdie said he finds writing both scary (“Are you going to be able to sustain it all the way to the end?”) and exhilarating. “There’s a writing self which is not quite your ordinary self and which you don’t really have access to except at the moment when you’re writing, and certainly in my view, I think of that as my best self,” he said. “To be able to be that person feels good; it feels better than anything else.”

I don’t know if this is a good thing or not, but that’s how I feel about writing. And blogging is a form of writing. And just because it feels good, of course that doesn’t mean it’s a good thing to do. But until and if I find myself, like Emily Gould, “losing the will to blog,” I’ll stay at it. And I’ll continue to imagine that it matters to someone besides me.

So, catching the third ball before it falls… I’ll end with some poetry. Not mine, you’ll be glad to know! The other day I saw this book in a friend’s office and asked him about it. The book is called Love’s Immensity: Mystics on the Endless Life by Scott Cairns. Turns out the friend isn’t so big on the book, which takes the words of thirty-seven mystics of the Church and turns them into poems. (My friend liked Cairns’ book about his pilgrimage to Mount Athos, Short Trip to the Edge: Where Earth Meets

Heaven.) But I loved Cairns’ poems. Hard to decide which to share, but I’ve decided on one based on the writing of Saint Gregory of Nyssa (c.335-395)… because his mystical writings are some of my favorites. Especially his book The Life of Moses . So, here’s one of Cairns’ poems: (with apologies to Cairns because my blog won’t keep the formatting of the poem)

The soul that looks
Finally to God, conceives
A new, mouth-watering
desire for His
Eternal beauty,
And tasting this, she
awakens to an ever
Greater yearning—
An ache never
to be fully satisfied.
By this sweet hurt,
She never ceases
To extend herself,
to touch those things
Beyond her reach
And ever beckoning.
By this she finds herself
Passing, always,
From her present
circumstance to enter
More deeply the interior
And to find
there yet another
Circumstance awaiting.
And thus, at every point
She learns that each
New splendor is to be
eclipsed by what will come—
The ever-exceeding
Beautiful that draws, and calls,
and leads the beloved
To a beauty of her own.

At every point, each new splendor will be eclipsed by what will come. Am I reaching too high? This poem reminds me of the song, “The Drop and the Dream,” by Chris Delmhorst. Especially this verse:

It’s both our curse and our grace, here in this place