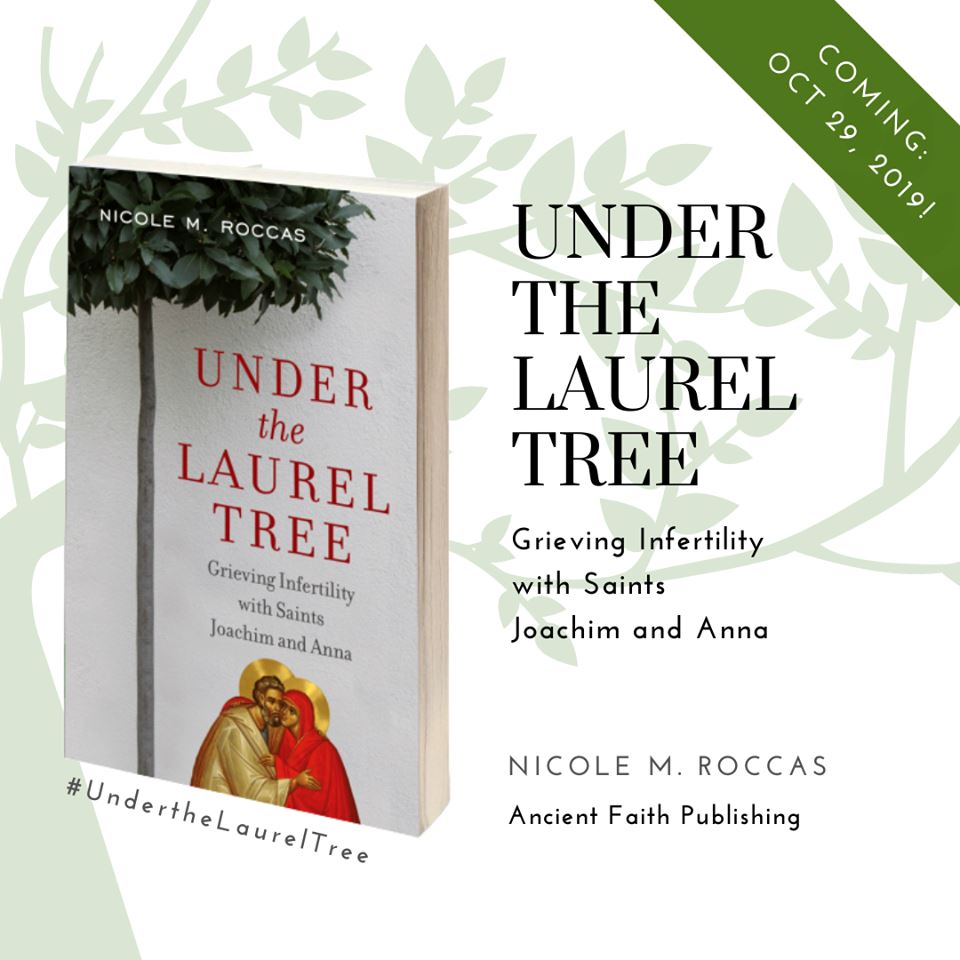 During Lent of 2018, I wrote a series of six blog posts about a book called Time and Despondency. The author, Nicole Roccas’s new book Under the Laurel Tree: Grieving Infertility with Saints Joachim and Anna, released October 29 from Ancient Faith Publishing. I’ve been reading an advance readers copy, and also Nicole’s own words as she was writing the book, from “Time Eternal,” one of her two blogs:

What can I say except that books, like grief, enter our lives through all sorts of different avenues, too. And this one was not the book I asked to write. It was certainly not the book I dreamt of creating when I was a little girl with authorial ambitions. It was not the one I thought would follow Time and Despondency.

Still, I think it’s a book I was supposed to write.

More than anything, though, it’s the book I wish I could have read four years ago, after coming home from the doctor’s office, trying–with my husband–to process something I never in a million years saw coming.

Like Nicole, I am infertile. And as I continue in my reading in her book, I discover that I also fit a subset of that category of infertile women because I am also sterile. I learned at age 16 that it was medically impossible for me to ever conceive a child by traditional means, and I have never desired to pursue IVF or any other non-traditional possibilities. Women who have not yet conceived but are still trying, and have not been proven medically sterile are in the category called “infertile.” And this also applies to couples, to the wife and the husband. Like Joachim and Anna.

Yes, that Joachim and Anna from the Bible. The ones who struggled 50 years to conceive. The parents of Mary, who became the Mother of Jesus. Like me, Nicole is an Orthodox Christian, and much of her book is written from that perspective. But please don’t stop reading now just because you’re not an Orthodox Christian. This book is for anyone who has experienced or is still experiencing the great loss that infertility brings to our lives. Nicole compares Elizabeth Kubler Ross’s 5 stages of grief with Joachim and Anna’s 5 stages of “infertility grief.” There is much secular wisdom in this book as well as spiritual encouragement.

I remember when I woke up from the exploratory surgery I had when I was sixteen and learned that I could never have biological children. My first reaction was actually one of relief. Not relief that I couldn’t have children, but relief that I didn’t have cancer or something else wrong with me. It was the summer after my sophomore year in high school. At that young age, I did not begin to grieve, because I had not yet begun to experience what Nicole calls an “apophatic grief” . . . “a grief of negation for something we never had.” That grief would come for me sooner than I expected.

Less than a year after my surgery and discovery of my infertility, during the spring of my junior year of high school, I fell in love at age 17 with a 19-year-old sophomore at the University of Mississippi. Very early into our two-year courtship we discussed marriage and our future together. I will never forget the first words Bill Cushman said when I told him that I could not conceive a child. Without missing a beat he said, “Then we’ll just adopt them.” I wept as he held me close. His unconditional love felt like a healing balm, but it couldn’t take away the pain. As his older brother’s first child was born, the grief began to enter my psyche. We were married in 1970, at the young ages of 19 and 21, and immediately applied to adopt a child. This process took seven long years, and that’s when the grief became overwhelming at times.

Each time a friend’s news of pregnancy was announced. Each baby shower I attended. Each time I held a friend’s newborn infant. Of course I was happy for my friends, but I often couldn’t even make it home from these events without bursting into tears.

I did find some comfort in reading the section in which Nicole wrote about what she called “the mystery of fertility”:

Who doesn’t marvel at the wondrous sight of an infant, all writhing fingers and toes in miniature? But this is only one view of the great picture of life—the recognizable, front side of the tapestry of humanity that is ultimately not ours to weave. In infertility, we are invited to walk around back to peer at that same mystery from the other side. As we do, we glimpse something of the shadows, the loose and dead ends, the gaps and empty spots of human biology and existence. This is hardly a lesser mystery.

I have been blessed to experience that mystery “from the other side” in a very intimate way several times. First was when my brother’s wife asked me to join her in the labor and delivery room during the early stages of the birth of her first daughter, my niece Aubrey Leigh. We had adopted our first child, Jonathan, just a couple of years prior to this, which numbed my grief a bit, and enabled me to enter into this mystery of my niece’s birth with greater joy. About fifteen years later, I was again asked to be at the birthing of a Godson. And then the ultimate experience “from the other side” came in 2012, when my daughter asked me to be with her during the birth of her first daughter, Gabby. It was indeed, “hardly a lesser mystery.” And yes, it was healing.

Bringing Life into the World

I haven’t finished reading Under the Laurel Tree, but I doubt I will find anything in the remaining chapters that will bring me as much peace and joy as these words from Nicole in the first chapter:

I don’t regard any human being as truly incapable of bearing or producing life—even people who have been medically diagnosed as such. The witness of Christ demonstrates that biological procreation is merely a shadow or icon of the Life He has given us. Our task, whether barren or
sterile or fertile, is to manifest that Life to the world through whatever
means, opportunities, bodies, and talents He has given us. We bring life into the world every time we are kind, every time we hope in God’s mercy, every time we offer ourselves to Him and our neighbor self-sacrificially, every time we do something that creatively and newly manifests Christ to the world.

Every time we are kind. Every time we offer ourselves to Him and our neighbor self-sacrificially. Every time we do something that creatively and newly manifests Christ to the world. As I read these words, instead of grieving what I cannot do, I feel a shimmer of joy at what I can do. I’m not the only author who uses the term “giving birth” when referring to finishing or publishing a book. We often refer to our books as our “babies,” because we have labored with them, have given them life, and have brought them into the world.

Most of you who are reading this know that my husband and I have three grown adopted “children,” now ages 36, 38, and 42, and two of them each have biological daughters, now ages 4, 6, 9, and 10. I could write a book about the joys of adoption, but I think Nicole has an important point to make about adoption not resolving infertility grief:

For all sorts of ethical and emotional reasons, infertility and adoption
should be two separate conversations. Adoption is a big deal. It’s
complicated, time-consuming, in some cases expensive, and it entails
a whole other journey of waiting, risk, marital strain, and possible
disappointment. A couple has to be prepared for that, which is less
likely to happen if they envision adoption merely as the long-awaited
promised land to their barren desert. More than this, children—biological or adoptive—should not be regarded as merely the means to
our emotional fulfillment as potential parents.

I know people who have biological and adopted children. Adoption for them was not their only option for becoming parents. For us it was. I remember early in our adopted children’s lives how many times people would say things to us like, “Oh how wonderful of you to adopt these children!” As though what we had done was a great humanitarian deed. And I can remember almost feeling ashamed that what I was thinking in response was that we didn’t do this for them, for the children, but we did it for us, so that we could experience parenthood. So that we could have a family. Was that a selfish motive? Was that different from the motives of couples who bring children in the world biologically? These are, indeed, complex issues.

My husband and I have not experienced the same “stages of grief” that Nicole explores in this book, primarily because we didn’t go through years of trying to conceive naturally, endless doctor appointments and tests and procedures, and finally after many years coming to terms with our infertility. We knew from the beginning of our marriage, and even before our marriage, which I think helped us greatly. But we still grieved. Next year we will celebrate 50 years of marriage. We have so much to be thankful for, and Nicole does remind us through the thank offering of Joachim and Anna, that “giving thanks is the goal” of the Christian life.

2 thoughts on “Under the Laurel Tree”