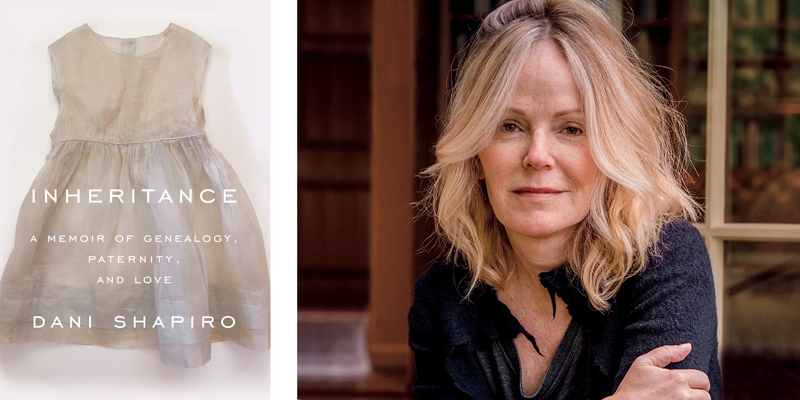 A Memoir of Genealogy, Paternity, and Love

After my last post, which was a book review and personal reflections on Nicole Roccas’ book about infertility–Under the Laurel Tree, I didn’t plan to follow up with (a) another book review or (b) more reflections on infertility. But that’s what I find myself doing today. When I put something on Facebook recently, indicating that I was reading Dani Shapiro’s memoir, Inheritance, a friend gave a thoughtful response and said she couldn’t wait to see what I thought about this book. So here we go.

In 2016 author Dani Shapiro casually submitted her DNA to a genealogy website and got the shock of her life. She learned that her father, the man who had raised her, was not her biological father. This upended her universe and she went on a search to find and meet her biological father (her “social father” was deceased at this point) and a deeper search to clarify her identity as a person.

Not only was this important because of the culture shock involved–Dani’s family were Orthodox Jews and her sperm-donor-father was not–but also because of the secrets that were withheld from her by her parents. Dani’s parents were having trouble conceiving and went to a then famous fertility clinic where donor sperm were mixed with the father’s to increase the possibility of conception. (Years later the doctor at this facility was found out to be a fraud, not a physician at all, and the place was shut down.)

The “happy ending” to the book (SPOILER ALERT!) came when Dani found her biological father and he agreed to meet her, and she had a congenial reception into his family, including a good relationship with a half sister. But Shapiro didn’t sugar coat her story. At all. One of the things that made the book powerful to me was her honesty at each step of the process, and especially near the end, when her biological father’s wife expressed her fear that if Dani discovered more half-siblings, they might also come looking for their biological father, for her husband, and how that might upend their happy family. As Shapiro writes:

What if, as I strongly suggested, there were others? More women or men in their early-or-mid-fifties scattered around the country who were biological children of Ben’s? . . . Here was a massive ethical conundrum, one I would explore if the need ever presented itself.

She has promised her biological father and his wife a measure of privacy, but at what cost to herself and her potential half-sibings? Her information was at this point still up on Ancestry.com, so more connections could potentially happen in the future. But it seems that Shapiro has focused more on the present, and on finding peace with who she is as a person, and how having these two dads, whom she says were “honorable to the core.”

So, why was my friend so interested in what I would think about this book? Probably because I, like Shapiro’s mother, was desperate for a child as a young married woman. And as I said in my post about infertility, each time another friend got pregnant, had a baby shower, gave birth, and brought their baby home with them, I was devastated. And yet my husband and I never even discussed a different option for conceiving a child. I could not produce eggs, so artificial insemination wouldn’t have worked. I’m sure we wouldn’t have considered donor eggs or donor sperm, from an ethical point of view. I don’t say that as judgment on those who have chosen this route, but only that it wasn’t something that I/we would have been comfortable with.

We have three wonderful (now grown) adopted children. None of them have any of our DNA, but we love them immensely. Much of their personhood comes from having been raised by us. From having lived the first years of their lives in our home. The degree to which their personhood comes from their biological parents is something we have left to each of them to explore on their own, if they choose to.

A final word about the book (since this started out as a book review): Shapiro has crafted a wonderfully honest and beautifully written memoir, and I couldn’t put it down. As Newsday wrote in their blurb: “Just as you think you’ve crested the big reveal, Shapiro builds more tension, chapter by short chapter; she keeps you close as she feels her way through unfamiliar terrain.” That tension was brilliantly done, and I stayed up past midnight more than once because I couldn’t quit reading. (I’m usually lights out by 10:30.)

But I think it’s these words from The Times London that I embrace and agree with the most, so I will close with them:

Fascinating… Shapiro writes with poetic precision… and she knows how to tell a story. There is true narrative momentum to this tale.