>That’s the question Augusten Burroughs asked in his 2003 memoir, Dry. It’s a gritty description of his life before and after sobriety. And the recovery part(s). His descriptions of each stage are graphic:

“I take the first sip of my martini. It feels exactly right, like part of my own 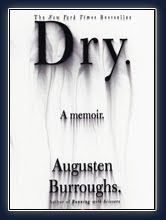 Juggling a successful career in advertising with a love for friends that keeps on giving, Augusten is finally forced to face down his demons or lose his job. In rehab, his roommate tells him on the first day, “It’ll take a few days, but you’ll see. You’ll get it.” And Augusten is thinking, “This is probably exactly what the Reverend Jim Jones said to his followers as he stirred the Kool-Aid.”

I agree with critics who say Dry is better, deeper, than Running With Scissors. Others call his work “darkly comic” and “funny-sad,” and those are apt descriptions. He’s also scathingly honest, a trait I appreciate in memoirists.

“Sober. So that’s what I’m here to become. And suddenly, this word fills me with a brand of sadness I haven’t felt since childhood. The kind of sadness you feel at the end of summer. When the fireflies are gone, the ponds have dried up and the plants are wilted, weary from being so green…. It’s the feeling of something dying.” 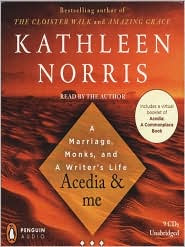 I think creative types fear sobriety the most. Or anything that might dull their creative edge. As I continue reading Kathleen Norris’ book, Acedia and Me, I discover that she and her husband, both poets, shared that fear:

“If writers are often stymied by depression or addiction, many are also wary of psychoanalysis, psychotropics, and twelve-step programs as potentially detrimental to their art. Therapists find that some writers use treatment as an excuse to procrastinate, while others fear that the sessions will drain them of material they should be using in their work.”

(By the way, if you haven’t been reading my blog, I have an earier post in which I began my reflections on Acedia and Me, here.)

Granted Norris and Burroughs have different stories to tell, but there are common threads running through both writers’ works, although they search for answers in very different places.

Burroughs search invariably leads him from relationship to relationship. His best friend is dying of AIDS. His latest love interest is from his rehab group, which isn’t allowed. In his struggle to find peace in the early days of sobriety, Burroughs admits:

“I’m worried that all of the inner mess that was channeled into alcoholism is now channeled into other disturbing rivers. That I’ve drained the lake to flood the city.”

That’s how I’ve felt my whole life, as I’ve watched the various vices take turns with my soul, flinging me from the depths of despair to the giddy heights of temporal pleasure and back, sometimes in less than twenty four hours. But like Connie May Fowler and several other writers said at the Southern Women Writers Conference, writing can be our salvation. It can literally save lives. Norris says, “Storytelling itself can be a redemptive act for the writer.”

But then Norris talks less encouragingly about poets, asserting that she has learned from her reading of Aldous Huxley’s “Accidie” that “poets had not been well for some time.” I know the same can be said for many artists and musicians, but her words about the poets—the prophets of our world—are disturbing:

“Two poets idolized by many young woman of my generation, Anne Sexton and Sylvia Plath, had, shortly before their suicides, churned out four to six poems a day. In the posthumously published Winter Trees, Plat described her brain as ‘a gray wall… clawed and bloody,’ and asked, ‘Is there no way out of the mind?”

Her words reminded me of how Burroughs felt near the end of his book, one year into his sobriety: “Sometimes I feel like I have hives in my brain that I can’t scratch.”

See, that’s how I feel almost every day… until I have a drink. Sometimes a creative project can scratch the itch, or a trip to the beach, or a beautiful liturgy at Church, or news that I’m having another essay published… it’s the butt-in-chair-stare-at-computer-screen-and-write stuff that’s hard. And of course the laundry and errands and household stuff. And even prayer–especially prayer. And the rejections, the failures, the watcher shouting in our ear, “You can’t write. Just quit and do volunteer work.” (Nothing wrong with volunteer work, by the way. It’s possibly a higher calling.)

“What Plath and Sexton demonstrate is not that writers must nobly endure self-destructive compulsions, but that no artist can maintain such a high level of creative intensity. When one has bee writing in the heights of what Sexton termed ‘a fugitive frenzy,’ one needs a way to come down safely. Taking a walk may work, but other means can be more tempting: tranquilizers, marijuana, and above all, booze…..Going up, coming down, and paying a steep price.”

As Norris’ poet-husband, David, struggled with health problems, mental and physical, he used alcohol to fuel his endeavors, and “panicked at the thought of having to give up drinking—he felt he would then lose his creativity.” And both David and Kathleen opted not to use psychotropic drugs to ward off depression. “We believed that our ups and downs were part of the creative process, and we didn’t want to risk being flattened emotionally, which could stunt our work.”

I have bi-polar friends who must face that same fear daily—the risk of being flattened emotionally—until their meds can be balanced, along with their emotions. My father-in-law had this struggle, finding more misery in the middle, where everything was gray, than in the ups or the downs, where he felt more alive.

A big difference in Burroughs and Norris is that Norris tried to reconcile her writing with faith, whereas Buroughs pretty much left God out of the picture. He did recognize the “plain, almost monastic process of waking up, taking a shower, going to an AA meeting and then doing this again and again, day after day until an amount of time had passed it became not a struggle, but a routine.” It’s a little sad to me that at the end of the day he didn’t have something bright to hold onto, and I wonder how’s he doing now, six years later. I’m not sure that AA meetings alone would sustain me. In fact, I’m pretty sure they wouldn’t.

Norris, on the other hand, greets a crisis as “a gifting” and follows a wise physician’s advice: physical exercise and spiritual direction. A Benedictine monk once encouraged her to read the Letters of Flannery O’Connor, so she’s seems to be finding her way with spirituality and art. And she doesn’t claim that there’s only one way—quite the contrary:

“Depression has many causes: genetic disposition and chemical imbalance in the brain, as well as unwelcome change, notably loss in all its forms. Can we agree that there are many treatments as well? My husband thought himself incapable of prayer; at the crisis points of his life, Freudian psychiatry brought healing. One might say he had faith in it. For me, a measure of healing has come less from psychology than from religion, specifically the ancient practices of prayer and psalmody.”

When I read her words, I instantly went to my Psalter and began reading and remembered the joy found in those pages.

What Burroughs and Norris have in common is their understanding of the necessity of somehow embracing the monotony of daily life, whether it be living without alcohol or without something else exciting to diffuse the boredom. Norris didn’t battle alcohol (at least not by page 112, which is as far as I’ve gotten) but the demon of noonday is an equal match.

When her husband was in a crisis a friend called and asked if she had something to take, herself, and she said, “I have the Psalms,” and the friend said, “And they’re enough?” “Yes,” I replied… I felt that I needed my wits about me, and needed to feel whatever I was to feel.”

Reminds me of one of my favorite Iris Dement songs, “I’ll Take My Sorrow Straight.”

At one point when Norris’ husband agreed to a low dose of Prozac (he felt it “took the edge off his despair”) Norris shared a passage with him from Louise Bogan’s memoirs, which she writes from the window of a psychiatric ward…. She found a rare peace when she left the hospital, and wrote:

“I don’t know where it comes from. Jung states that such serenity is always a miracle . . . . . I am so glad that the therapists of my maturity and the saints of my childhood agree on one thing.” I like that.

I know this is long-I’m almost finished for today. But I think it’s important to say that in the next chapter I read, Norris is moving in the direction of hope, on several levels, and I can’t wait to keep reading. She learns that “there is an existential monastic view that the opposite of acedia is an energetic devotion,” and that she (like me) is “especially susceptible to acedia… because I harbor within myself the virtue of zeal.” I understand her battles with what she calls “the devil I know,” and how she at some times “prefers slavery to freedom.” She quotes the stoic, Seneca, who observed that people “love their vices with a sort of despair, and hate them at the same time.”

So, how I am finding hope in her words? I’ll close with a long quote, but it’s worth it, so hang in there:

“Both ancient and modern writers speak of the profound serenity that can come after a period of torment and trial…. Depression at its worst is the most horrifying loneliness, and from it I learned the value of intimacy. The pain is real, but remedy may yet be found. For Evagrius, the struggle with acedia is worthy because it leads not only to peace but also to joy. If, as the scholar Christoph Joest has written, acedia for Evagrius was the culmination of all the temptations, then its absence is the fulfillment of all the virtues which find their ultimate expression in love. That is why the struggle is worth our while.”

Postscript: I just found out that Jill McCorkle is reading and signing her new book of 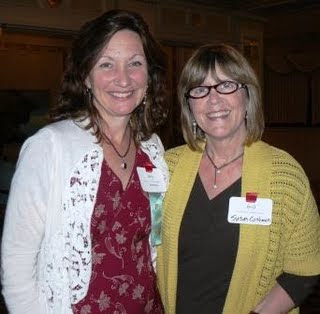 short stories, Going Away Shoes, at Burke’s Books here in Memphis at 5:30 p.m. on Monday, October 19. I’ll be driving home from Seagrove that day, so it’s doubtful I can make it, but if you’re in the area, GO. And buy her book. She’s a great writer and reader. I met Jill at the Conference on Southern Literature in Chattanooga in April. (near the end of the post) Just wanted to give everyone in the area a heads up!

4 thoughts on “>Why Does Sobriety Have to Come With Feeings?”