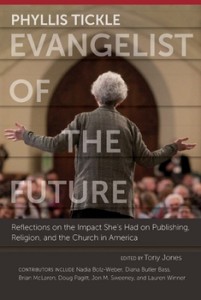 I learned a new word last night. And no, I wasn’t playing Scrabble with Corey Mesler. I was attending a reading/signing at The Booksellers at Laurelwood here in Memphis. And the word was festschrift. It’s a collection of essays honoring someone—often an academic—while they’re still alive. (If it’s done after they die, it’s called a gedenkschrift.) So there’s another new word.  And in Latin, the words liber amicorum are often used for such a book. I like this because it means “book of friends.”

The festschrift usually is a reflection by these friends on the honoree’s contributions to his or her field. Last night, the honoree was Phyllis Tickle, whom I had not met. And one of the “friends” who contributed to the book—Phyllis Tickle: Evangelist of the Future—is my friend and fellow Memphis author, Sybil MacBeth.

Sybil is one of a dozen or so contributors to the festschrift. She hosted the reading last night, and she’s also part of our Memphis Writers Group which has been meeting socially (and some of the group meets for manuscript critique) for a couple of years now. She did a great job of reading excerpts and summarizing Tickle’s work. And she also read from her own chapter in the book, “Mothering an Author Through the Birth of a Book: Phyllis Tickle as Doula.” Sybil met Tickle in 2001, when Tickle was the keynote speaker at a Christian education conference called “Spirituality in the 21st Century.” As Sybil says:

During her plenary sessions Phyllis took the whole room on a journey of history, spirituality, science, physics, and sociology. Through narrative and storytelling chronicles we heard a memoir of our Church family—relatives of the past and those just being born—with all its dysfunctional familial clashes. I took copious notes in my black marble Mead composition book; she barely used a note. She was brilliant and articulate, funny and insightful.

I could tell that about Ms. Tickle from her brief comments last night, which left me wanting to hear more from her. 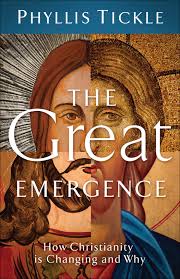 As I reflect on the evening, I realize that I actually learned another new word—emergence. It’s not that I wasn’t familiar with the word, emergence. It’s that I hadn’t heard it used in a religious context: emergence Christianity, the emergent frontier, the emerging church. Tickle wrote a book about the movement called The Great Emergence. This talk, given by Tickle in 2008, reminds me somewhat of my own spiritual journey in its early stages, about forty years ago, with the group that ended up in the Orthodox Church.

When we met and I asked her to sign my copy of the festschrift (I’m trying to memorize this word) I told her that I wasn’t familiar with the emerging church movement, but that I was a convert from the Presbyterian faith of my childhood to the Eastern Orthodox Church. Not missing a beat, she smiled and said “well, that was quite an emergence!” I’m intrigued by this charming stateswoman, and I look forward to reading some of her work.