As I begin yet another round of revisions on my novel, Cherry Bomb, I’m searching for inspiration for the difficult—but hopefully exciting—work ahead of me. Some of that inspiration is coming to me from fellow writers and mentors, and for that I am thankful. And then there are the writers I’ve never met who share their wisdom through excellent publications such as Writer’s Digest Magazine. (See my post from last Wednesday about the wonderful interview with Garth Stein.)

Today my inspiration came from Grant Faulkner’s article in the January/February 2015 issue of Poets & Writers Magazine, “More Ideas Faster: Writing With Abandon.” (And here’s a nice interview with Faulkner about National Novel Writing Month.) Faulkner’s description of his typical writing style sounds much like my own:

My approach formed itself around what I’ll call ‘ponderous preciousness.’ I’d conceive of an idea for a story and then burrow into it deliberately. I’d write methodically, ploddingly letting thoughts percolate, then marinate—refining and refining—sometimes over the course of years…. My writing moved slowly from one sentence, one paragraph, to the next, and I often looped back again and again, driven by the idea that I needed to achieve a certain perfection before I could move forward.

Although I’ve heard my good friend, Neil White, give his wonderful craft talk on the Art vs. Craft of Writing several times, I’ve never been able to make the shift from slow, methodical writing (revising as I write) to a style of writing—at least a first draft—with abandon, without care for craft, only for the art, opening wide the creative avenues down which the words carry the writer. I’ve never allowed myself to write what most authors affectionately refer to as “shitty first drafts.”

But now that I’m faced with the challenge of introducing new subplots to my novel—and letting the characters take off in directions I might not have originally planned for—I think I need a taste of this abandon and speed (Grant) Faulkner writes about. At one point he refers to the other Faulkner’s writing:

William Faulkner wrote as many as ten thousand words a day during his most prolific period, and generally averaged three thousand words.

If I’m going to add 20,000 words to my novel and set my characters free, I’m going to need some of this inspiration. And in following this advice, maybe I’ll find the voice I’ve been hoping to develop:

We don’t possess a voice as much as we create one, find one…. I’ll always tend to write in the slower rhythms of a walker because I didn’t train as a sprinter in my youth. Still, it’s nice to sometimes jump out of my more methodical process, whether in a rough draft or a fifth revision, and open a vein to search for something more unbridled and authentic. 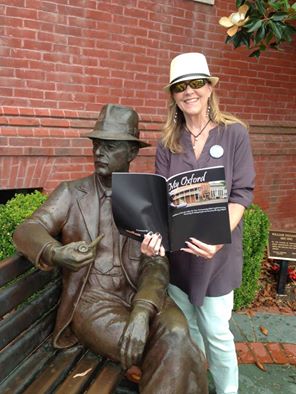 That’s what I hope to do as I tackle this next round of novel revisions—to jump out of my usual process and allow my voice to become more unbridled and authentic. Again, here goes…. with help from a couple of Faulkners.