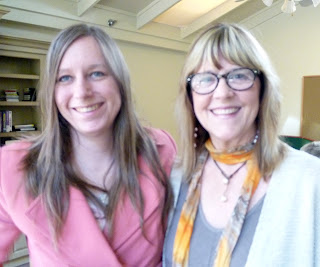 I met Lori DeBoer(right) on Facebook about a year ago. Lori is the founder and director of the Boulder Writers Workshop (BWW), as well as an author, writing coach and editor. Last summer she invited me to lead a writing workshop for the North Denver Metro group of the BWW when I was in Denver visiting kids and grandkids. It was fun meeting such an enthusiastic group of emerging writers.

Saturday I was again her guest, this time at the BWW’s monthly Literary Salon. Lori asked me to share a bit about my writing and publishing journey, and to read from my essay, “Chiaroscuro: Shimmer and Shadow,” which is included in the anthology, Circling Faith: Southern Women on Spirituality. I was welcomed by a wonderful group of about eighteen men and women writers from the Boulder area.
I haven’t seen Circling Faith in any of the bookstores I’ve visited in Denver or Boulder, but that’s not surprising since it’s about Southern women and spirituality. Growing up in Mississippi and then living for the past 24 years in Tennessee, I’ve always been around religious people. But Colorado is a different environment.
Having just recently read a report in the April issue of 5280—The Denver Magazine—on “What Do We Believe? Religion & Spirituality on the Front Range,”I opened my comments by sharing an excerpt from the article:
“Religion is on the wane in America—at least that’s the most recent wisdom…. Religious affiliation—across nearly all faiths—is down. Americans aren’t going to church or synagogue or prayer services like they once did. And our belief in God is diminishing as baby boomers die and the millennials come of age.
“But these polls may be overlooking a crucial phenomenon: Although participation in organized religion is declining, religiosity and spirituality may not be on the same downward trend. After examining the national research and thinking about life on the Front Range—an area that juxtaposes the Christian stronghold of Colorado Springs with cosmically in-tune Boulder—we began to wonder how the people at our lofty elevations really feel about a higher power.”
So, I was about to give my first public reading of my essay from Circling Faith to a group of people in “cosmically in-tune Boulder.” I wasn’t sure how it would be received, so I used a common denominator to bridge the gap before I began reading. I knew that Lori has lined up my friend, Dinty Moore, to do an “online conversation” with the professional members of the BWW on May 22, so next I read an excerpt from his latest book, The Mindful Writer, as an introduction to my essay:
“There was a book I wrote once—actually I wrote it twice….I put four years of my writing life into that book, churned out about 1,200 pages between the two versions—and the book never saw the light of day, except for a very small portion, an excerpt that I eventually published a an eight-page essay.”
And that’s pretty much what happened with my essay in Circling Faith. I wrote two complete book-length memoirs between 2007 and 2010, and then decided not to publish either of them. And all that has appeared in print from those two books is a ten-page essay in this anthology. 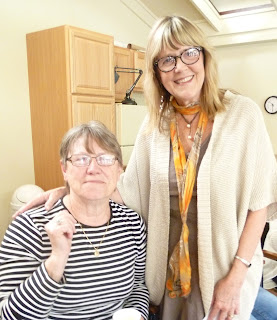 As I read the essay, and then entertained questions for about an hour afterwards, I relaxed into this new role. We discussed everything from how to form a writing critique group to finding a literary agent to the importance of building a platform for nonfiction books. This wonderful group of emerging writers includes poets, fiction writers, memoirists, and one “transformative” writer—Carolyn Rose Hart— who has just self-published a book that will be out next month and also contributed a chapter to a new anthology, Pebbles in the Pond: Changing the World One Person at a Time.  Signing a copy of Circling Faith for one of the workshop members—Karen Douglass— (above) was a new and humbling experience.
It was fun to meet another Southerner in the group, Ken Matthews, who moved to the Boulder area from Decatur, Georgia just a few months ago. We enjoyed discovering our shared favorite books and authors, including our mutual friend, Joshilyn Jackson. 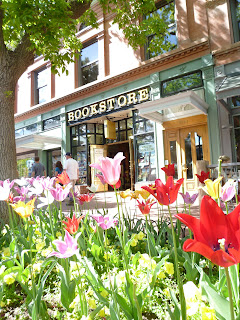 After the workshop, I enjoyed a two-hour lunch on the patio of Zolo Grill with Carolyn and another workshop member, Melissa Snyder. It was 75 degrees and sunny with a slight breeze—a perfect day. After we said our goodbyes, I explored the Pearl Street pedestrian mall, especially the Boulder Bookstore, where I picked up a copy of the 2012 Guide to Literary Agents. My visit to Boulder ended with a glass of wine at a sidewalk café next to the bookstore while people-watching and researching the GLA and circling the names of agents I plan to query for representation for my novel when I’m finished with revisions. There were thousands of tulips in bloom along the mall, creating a wonderland of color and adding to the beauty of the day.
Thanks again to Lori and all the members of the Boulder Writers Workshop for such a lovely day!
Please share!