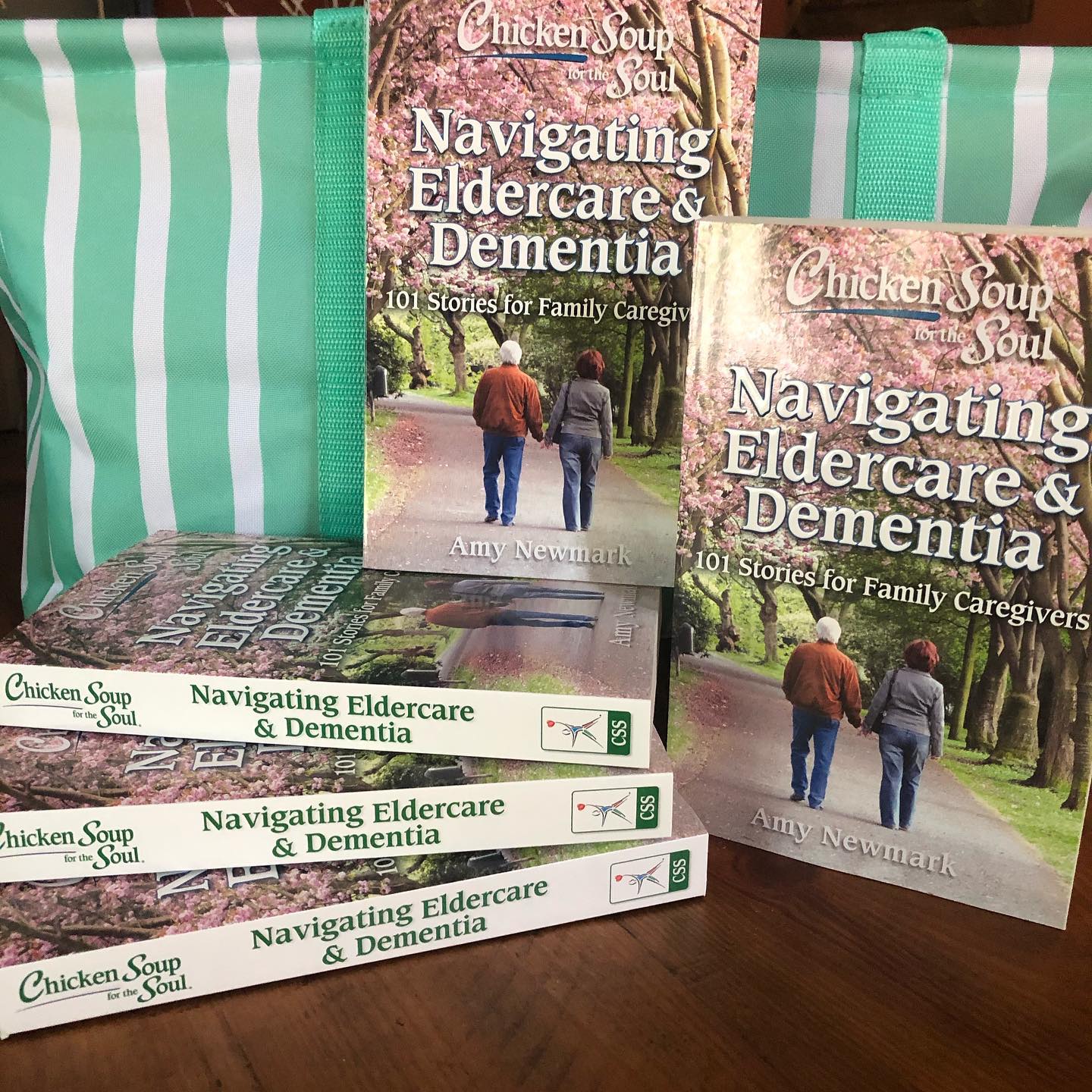 A few months ago my writer-friend Claire Fullerton suggested I submit an essay to the Chicken Soup For the Soul’s new edition, Navigating Eldercare & Dementia: 101 Stories for Family Caregivers, it was a no-brainer. Claire had read my memoir from 2017, Tangles and Plaques: A Mother and Daughter Face Alzheiemer’s, and felt that I have something relevant to say. I hope that I do.

I am honored to be one of over 300 authors featured on AlzAuthors.com, which is, as they say on their web site, “the web’s most comprehensive collection of books and blogs on Alzheimer’s disease and dementia.” (I hope they will feature the new Eldercare & Dementia volume from Chicken Soup For the Soul!) When I began to write a short essay to submit to Chicken Soup, I read over my page on the AlzAuthors site. I immediately knew what I wanted to focus on for the new essay.

I’ve heard so many people say that their loved one became mean or abusive due to Alzheimer’s disease, but it was just the opposite with my mother. She had been verbally and emotionally abusive to me most of my life, but Alzheimer’s disease tangled up her brain in such a way that she began to be amazingly sweet and loving to me in the middle and latter years of the disease. Which is why I submitted this to Smith’s Six-Word Memoirs (and it was published there): “The Upside of Alzheimer’s: New Mother.” Mother’s sweetness and God’s grace enabled me to forgive her. I love this quote, which the editors at Chicken Soup added to the top of my essay:

Forgiveness says you are given another chance to make a new beginning.—Desmond Tutu

You’ll have to read the essay (and maybe grab a copy of Tangles and Plaques) for the rest of the story.

Chicken Soup For the Soul

I was fascinated to read about the history of Chicken Soup For the Soul, and its publisher and editor-and-chief, Amy Newmark. What an inspirational success story! Since 1993, they have published over 250 books, as well as numerous TV shows, movies, apps, and even pet food! They are a socially conscious company that shares their revenues with numerous nonprofits that help make the world a better place. I am honored to be published in their latest book!

I’ve had essays published in five anthologies, and I’ve edited three anthologies of essays by other authors. I really love anthologies! I’m going to list them here, and hope that you will check them out and read the ones that interest you.

First, my essays in five anthologies:

“Chiaroscuro: Shimmer and Shadow—How a spiritual expat from the Christ-haunted South found healing through art and Eastern Orthodoxy” in Circling Faith: Southern Women on Spirituality (University of Alabama Press, 2012) edited by Jennifer Horne and Wendy Reed

“A New Mother” in Navigating Eldercare & Dementia (Chicken Soup For the Soul, 2021) edited by Amy Newmark

And now the three anthologies I have edited:

A Second Blooming: Becoming the Women We Are Meant To Be (Mercer University Press, 2017) with essays by 20 women authors and a foreword by Anne Lamott

Southern Writers on Writing (University Press of Mississippi, 2018) with essays by 13 women and 13 men from nine southern states, and a foreword by Alan Lightman

The Pulpwood Queens Celebrate 20 Years! (Brother Mockingbird Publishing, 2019) with essays by 67 authors and members of the Pulpwood Queens book clubs and a foreword by Robert Hicks and introduction by Kathy L. Murphy

If you love essays—like I do—I know you will enjoy these books! The first five people to leave a comment here will win a copy of Navigating Eldercare & Dementia!

8 thoughts on “Chicken Soup For the Soul”