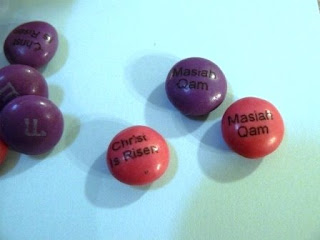 Christ is Risen! Indeed, He is Risen! Or as these M & M’s say (in Arabic) Masiah Qam!
(I ordered them from http://www.mymms.com/… to give as Pascha gifts. You can get them in any colors personalized for any event.) 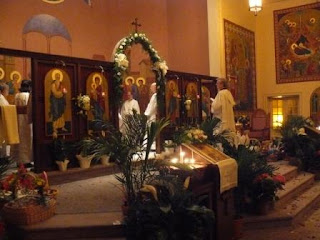 But on to more celestial things… the Pascha service at Saint John Saturdaynight/Sunday morning. (It began at 11 p.m. and ended about 1:30 a.m….. and then we feasted … on all the goodies everyone brought in decorated baskets. Some of the baskets are on the solea in this picture… waiting to be blessed by the priest at then 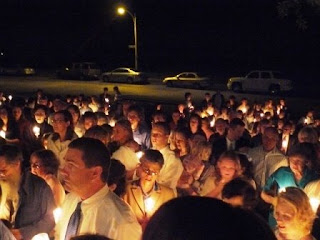 end of the service.) But I feasted on champagne and lamb soup.
I didn’t take many photos in the dark… didn’t want to use a flash and interrupt the service, and the dark photos aren’t so good. But this one, up close, shows everyone coming up the steps of the church at the end of the procession. 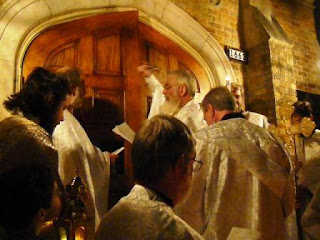 And here’s Father John Troy knocking on the doors of the church saying, “Lift up your gates, O Ye Princes… and the King of Glory shall enter in!” And a voice from inside the church says, “Who is the King of Glory?” And Father Troy says, “The Lord mighty in battle….” (click on the 4th video below for a live produc 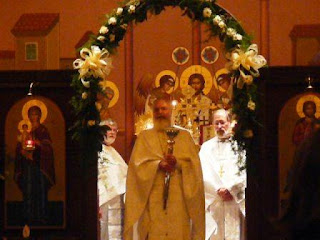 Here the priests wait for the people to finish filing back into the nave after the procession.

I took a few short videos so you can get a very brief look at what an Orthodox Pascha (Easter) service looks like.
The first one shows the church almost completely dark, even the vigil candles have been extinguished.
Then Father John Troy starts singing “Come take light from light” and goes down the aisle lighting candles, and parishioners share the light with the person next to them. The dark church becomes light as we prepare for the procession.
The procession begins inside, then goes out the front doors and around the building, down the street and back to the front steps.
Stopping at the top of the steps, Father Troy knocks on the doors of the church….
Once we’re back inside, we sing a million versions (and languages) of Christ is Risen… and the clergy take turns leading the exclamation. Here’s a couple of my favorites from Saturday night: Deacon Tim gives a try with Spanish… which comes out very Southern Boy Spanish… look at Father Don laughing behind him.
And Deacon James, instead of trying three languages, stuck with the Greek, but got increasingly louder and more enthusiastic with each chant.
Finally we got to my favorite Paschal hymn, “Shine, Shine, O New Jerusalem.”
Here’s what the Great Entrance looks like… when the clergy and altar services process from the altar through the nave with the gifts of bread and wine.
And finally, communion… the Body and Blood of Jesus Christ. Not just a symbol. Who would go through all of Great Lent and Holy Week for a symbol? Who would choose to fast and pray and engage in any kind of ascetic struggle for a symbol? The priest says, “With faith and the fear of God, come forth.” Most of the time I don’t have much of either of these… faith, or the fear of God. But Sunday morning at 1 a.m. I believed. And in a mystery, God’s precious Body and Blood filled my heart, my soul, my veins. The light of Christ illumines all.
These words from the Paschal homily of Saint John Chrysostom, which is read following the Gospel reading on Holy Pascha, are some of the most encourging words ever spoken from the pulpit:
Let no one weep for his sins, for forgiveness has shone forth from the grave. Let no one fear death, for the Savior’s death has set us free. He that was held prisoner by it has destroyed it. By descending into Hell, He made Hell captive. He embittered it when it tasted of His flesh…. O Death, where is your sting? Hell, where is your victory? Christ is risen, and you are overthrown. Christ is risen, and the demons are fallen. Christ is risen, and the angels rejoice. Christ is risen, and life reigns. Christ is risen, and not one dead remains in the grave. For Christ, being risen from the dead, is become the First-fruits of those who have fallen asleep. To Him be glory and dominion unto ages of ages.
Please share!