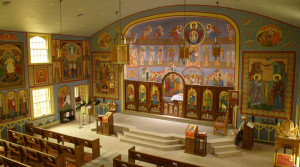 A few days ago I received a Facebook message from someone I haven’t seen in about 40 years. She had recently friended me on Facebook, and I learned that she had moved to the northwest after attending Belhaven College in Jackson, Mississippi, in the early ‘70s, which is where I knew her. She came to the Bible studies in our apartment in the early gatherings of the group that would eventually become St. Peter Orthodox Church in Jackson.

This person had investigated Orthodoxy but got tripped up in the ritualism, feeling that the “simplicity of Christ” got lost somehow. Eventually she became Catholic (not much ritualism there?) but she’s not content. The questions she posed to me in her Facebook message and later in an email were:

Have you found a spiritual home in Orthodoxy?

Are you spiritually filled in the Orthodox Church? 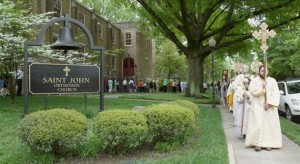 I’m glad she asked me both of those questions, because they really are not the same thing at all. My answer to the first question is “Yes.” The Orthodox Church is my spiritual home, and has been since 1987 when the group that started out meeting in our apartment in 1970 became an official Orthodox mission and I was Chrismated into the faith. Whether by birth and infant baptism, or by conversion as an adult, when one joins the Orthodox Church it becomes their spiritual home. And the priest and parishioners become their family. Just like one’s parents and siblings when one is either born or adopted into a family. It just IS your home.

But that doesn’t answer the question I think she was really wanting to ask, which has more to do with how much I like this home. Her second question addresses this issue—are you spiritually FILLED in the Orthodox Church? Interesting choice of a word, filled. Again I think of the parallel to my biological family. They fed me, but was I filled? And I think the answer to this question has a lot to do with appetite. What is it you are hungering and thirsting after? Once you decide what you want, then maybe you can determine whether or not your spiritual—or earthly home for that matter—is filling that hunger. 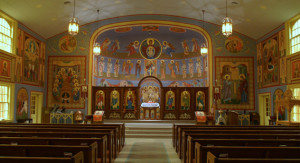 When I am hungering and thirsting after God, the Church satisfies my longing fairly well. I say fairly well because I can’t separate my broken human wants and desires from the spiritual thirst that’s put there by the Holy Spirit. I don’t just want God. I want God… and I want (fill in the blank). In my earthly family, I wanted a different kind of mother but I got the mother I got. But our earthly parents are flawed, whereas God is perfect. Perfect love. Perfect wisdom. Perfect grace. I think I just need to want Him more and earthly things less.

This 1000-calorie diet I’ve been on for a few weeks is teaching me more about what I want. I want to lose weight. But I’ve got to want that every minute of the day MORE than I want (again fill in the blank) food that isn’t good for me or is over my calorie budget. And even when I do the right thing, I don’t always get a reward (weight loss). It’s a very slow process. Maybe spiritual growth is like that.

So, I tried my best to answer my friend’s questions, but my answers aren’t necessarily what she needs. She needs to answer those questions for herself—about the Catholic Church (her current spiritual home) or wherever she lands. I sent her a copy of Circling Faith: Southern Women on Spirituality, the anthology which has essays by twenty Southern women of various faiths, including my essay about my early years as a radical convert to the Orthodox faith. I hope that reading these other women’s journeys will help her in her own searching. I don’t think one person can tell another which church they should belong to, but I do think that we learn something from being in a family—from living in communion with other human beings. 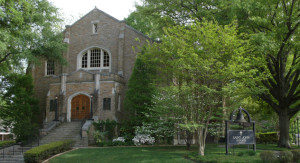 I also think that some of us—maybe Southern women in particular—expect too much from church. I’ve certainly had my “issues” with my church, some of which I’ve written about here and here. When I let go of wanting it to be perfect, I began to be more content. (Maybe another parallel to our earthly families works here, too.) In a way I have freed the Church to be a place I go to worship God and to give something back to Him and to others, rather than I place I go to receive something—a perfect experience of music, theology, art and architecture. The bottom line is it’s not perfect and it never will be. But yes, it’s my home.

(Photos are of Saint John Orthodox Church in Memphis.)

1 thought on “Faith on Friday: A Spiritual Home”