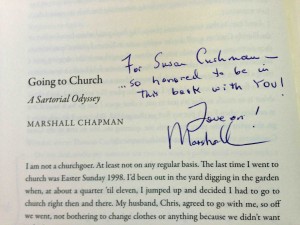 When Circling Faith: Southern Women on Spirituality came out last April, I was thrilled to find my essay, “Chiaroscuro: Shimmer and Shadow,” between the covers of the same anthology as such authors as Beth Ann Fennelly, Mary Karr, Connie May Fowler and Alice Walker. And then I went on a wonderful book tour that included churches and bookstores in four states, where I met a few more contributors, like Marilou Awiakta, Barbara Brown Taylor and Marshall Chapman. I became Facebook friends with Debra Moffitt, and one day I’d really love to meet the rest of these amazing Southern writers, who bring their diverse journeys and voices to the book.

But I must say that the most delightful surprise of this serendipitous gathering of spiritual essays was meeting Marshall Chapman at the Southern Festival of Books in Nashville last October. (Read my post from October 15, “Better Than Bourbon and Key Lime Pie,” for more details about the weekend.) I had already fallen in love with Marshall when I read her essay, “Going to Church: A Sartorial Odyssey,” in Circling Faith. A sartorial odyssey! (That means it’s about clothing—like my unpublished memoir, Dressing the Part: What I Wore For Love.) She wrote about what she wore to church on her return to the house of God after twenty years of absence. Where had she been?

Earlier that week, I’d been discharged from a treatment center in Arizona where I was bombarded with all sorts of new information on how to live my life, you know, one day at a time. Forty days before, I’d checked myself in for depression. Twenty years of living the high-octane lifestyle of rock and roll was beginning to take its toll. After three days of DOE (detox, observation, and evaluation), the report on my “Suggestions for Treatment” form read: “facilitate grief of father’s death,” “break down denial of multi-substance abuse,” and . . . something else about sex that I can’t seem to remember right now.

(I think that last line is my favorite in the whole book.)

Imagine my joy when I discovered that Marshall will be in midtown Memphis tomorrow night at a house concert! She’ll be singing songs from her new CD, Blaze of Glory. I’ve got most of the songs memorized already, but I can’t wait to hear her sing them in person. Here’s a nice review from American Songwriter. (For more information, check out the Facebook Event Page. Or just show up at 1858 Harbert Avenue at 6:30 Saturday night.) I love “Blaze of Glory.” And “Waiting for the Music,” about which she says:

Some songs I call my “lifesavers.” It’s like, if I hadn’t written them at the time I wrote them, I would have died some sort of spiritual death. “Waiting for the Music” saved my life. And my marriage.

That’s how I feel about much of my writing. Books and essays, not music. (Although I wish I had written music when I was young, but I wasn’t brave enough. I lived in my older brother’s shadow, creatively. He played lead guitar in a band in the ‘60s. And we played duets in piano recitals, but his talent overpowered me.)
Listen to a great interview with Marshall on NPR here.

But back to the book… when Marshall decided, on her second visit back to church, to wear comfortable clothes instead of a dress and heels:

When finally I sat down, I closed my eyes to get my mind focused on God. This was my first time wearing sweatpants to church and I was a little self-conscious, taking care to keep my coat closed over my knees. “Just give me some kind of sign.” … The first thing I saw when I opened my eyes was an embroidered message on the front of a backwards-worn baseball cap on the head of an African American teen-aged boy sitting directly in front of me. The words—less than a foot and a half from my face—said “Fuck Off Or Die!”… Then I closed my eyes. “God,” I said to myself. “I love you. you are a trip! Thanks!”