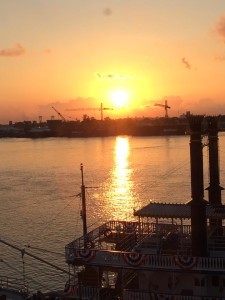 I woke up this morning at 5:45 a.m., probably because we left the curtains open with our lovely view of the Mississippi River from our corner room at the Riverside Hilton in New Orleans, and the sky was putting on a light show that culminated with a brilliant sunrise. The beauty of it drew my heart to prayer. To seek God in the morning, which is a common practice in the Orthodox Church, and I’m sure in many other spiritual traditions.

I followed up my morning prayers with a trolley ride down to the French Quarter for beignets at Café Du Monde, and a little bit of browsing a few shops. While waiting for the trolley to return for my trip back to the hotel, the sky put on another light show, which was made even better by the presence of these two ladies in dresses and heels, hats and parasols. It looked like something out of the 1940s… or an Edward Hopper painting. I found myself again drawn to God just because of the sheer beauty of the morning and the scenery. 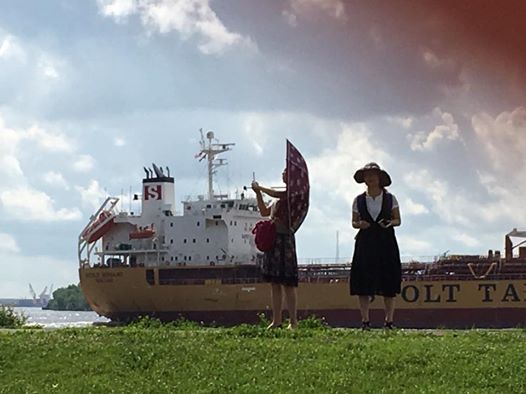 When I was a teenager, someone gave me this poem, “God in the Morning,” which has stuck with me for several decades. And now it appears again, with the information that it was probably written by a relative of my husband. Here’s how the poem just resurfaced in my life after so many years. It started with a funeral.

Funerals always seem to bring together random—or not so random—gatherings of friends and relatives from several generations. I love the serendipity of some of the connections that are often made at these gatherings. Like this one, which happened on May 24 at my mother’s funeral in Jackson, Mississippi:

My sister-in-law, Cathy Cushman Alexander (from Atlanta), was visiting with Derwood and Regina Boyles (of Jackson), whom she had never met. Derwood and my father were best friends from grade school in Jackson through rooming together at Mississippi State University and all through their adult lives. He and Regina were Mom and Dad’s go-to couple for ball games and other social outings. I love them both dearly. So… at the visitation for Mom’s funeral, they mentioned a poem to Cathy. It’s called “God in the Morning.” The reason they mentioned it was because it was written by Ralph Cushman, and Regina wondered if he was a relative of ours. (We’re still working on the connection, but it’s likely. Here’s some bio info on him.) Cushman was a Bishop in the Methodist Episcopal Church, and wrote many books, including this book of poems, Hilltop Verses and Prayers.

God in the Morning

I met God in the morning
When my day was at its best,
And His presence came like sunrise,
Like a glory in my breast.

All day long the Presence lingered,
All day long He stayed with me,
And we sailed in perfect calmness
O’re a very troubled sea.

Then I thought of other mornings,
With a keen remorse of mind,
When I too had loosed the moorings,
With the Presence left behind.

So I think I know the secret,
Learned from many a troubled way:
You must seek Him in the morning
If you want Him through the day! 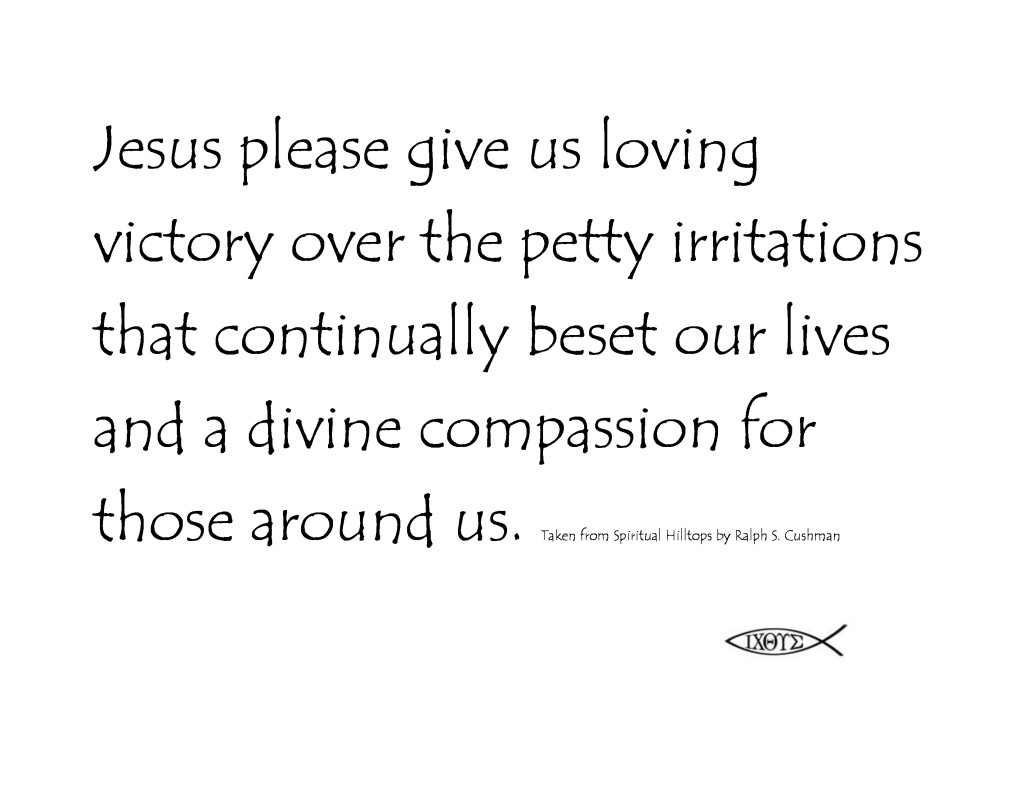 1 thought on “Faith on Friday: God in the Morning”