In my post on Monday about the 2013 Oxford Creative Nonfiction Conference, I mentioned Lee Gutkind’s remarks about the sacrifices a writer often makes for his work. He spoke candidly about “the things you miss.” And how great the cost might be—in his case, the loss of a marriage. For the author, Jessica Handler, it meant the loss of friends who don’t give you a wide enough berth for your labors.

Lee and Jessica’s words resonated strongly with me, especially because they were spoken on Sunday morning. It was May 5. To most of the hundred or so people at the conference, May 5 was just an ordinary Sunday. But for the millions of Orthodox Christians worldwide, it was the highest Holy day of the year. It was Pascha. It was our Easter. (See some beautiful photographs of Orthodox Christians celebrating Pascha in many countries here.)

When Neil, Kathy and I began planning the conference, the date was set for March. But there were no rooms at the Inn. The Inn at Ole Miss is the only on-campus housing, and many of our conference-goers would be flying in from around the country and wouldn’t have a car to get from a hotel room to the campus each day. So we began moving the conference a week or so later. And later. Until we found a weekend that worked for the faculty we had invited and also a weekend when there would be plenty of rooms at the Inn. The only date available was May 5.

My heart sank when I realized it was Pascha. I had missed Pascha last year, because I was in Denver where my daughter was having a baby and I didn’t want to drive alone in the middle of the night to and from the service. It was inconceivable that I would miss Pascha two years in a row, but I did.

MISSING PASCHA is a big deal. Having been through 40 days of Great Lent, and having begun the journey towards Pascha with the services of Holy Week the previous Sunday, Monday and Tuesday evenings (Bridegroom Matins), I made the decision to skip Holy Unction on Wednesday night. I would be leaving for Oxford on Thursday morning, and it didn’t feel right to participate in the sacrament designed to prepare one for communion at the most holy of all feasts if one wasn’t going to even be present at the table.

As I picked up Julie Schoerke from the Memphis airport and drove her down to Oxford (she was on our faculty) we chatted about our families and our careers, but not about religion. Not about church.

As the conference began and as I got caught up in the events of the weekend, I didn’t think about what I was missing. Well, except every night when I crawled into bed and allowed my thoughts to wander away from the microcosm of the literary world of Oxford and the wonderful writers and agents and editors and publishers who were gathered there. In bed at night, I would imagine what my brothers and sisters at St. John Orthodox Church in Memphis had done that day.

I pictured them on Holy Thursday, (and I missed making Greek Easter Soup and dying eggs red!) as they partook of the Body and Blood of Christ in remembrance of the Last Supper. I watched them in my mind’s eye as they processed around the church with the priest holding the cross with the image of Christ crucified, and as they read the Passion Gospels. I found myself singing the Lamentations with them as they decorated the bier with flowers and walked through Christ’s death and burial together on Holy Friday:

Every generation to Thy tomb comes bearing their praise… 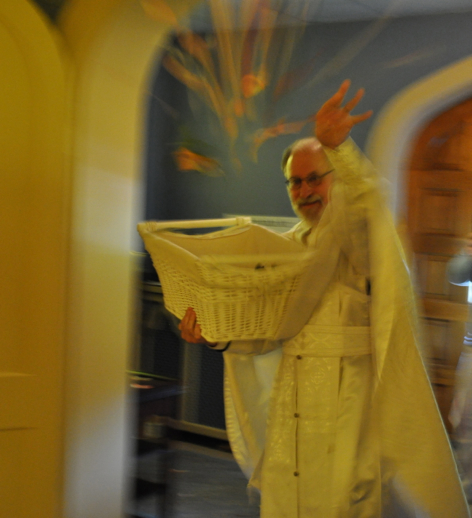 And then when a friend from church posted this picture of my husband, Father Basil Cushman,(AKA Dr. William Cushman for those who don’t know his other identity) joyously tossing bay leaves and rose petals into the air during the Holy Saturday service, my heart began to break. And all the people sang out:

“The dead shall arise!”

At the sight of that photograph the cost—the sacrifice of missing Pascha for this writing conference—began to feel like a huge loss.

In the Orthodox Church we have our Paschal service late on Saturday night. It usually begins around 11:30 p.m. so that it will be after midnight when the priest knocks on the front doors of the church (with the entire congregation behind him, having followed him in a procession outside) and cries out with a loud voice:

“Open your gates you princes, and be lifted up, you everlasting doors, that the King of Glory may come in!”

And the people listen quietly for the voice that replies from inside the church:

“Who is the King of Glory?”

Everyone tries to guess the identity of “the voice” each year—usually one of our deacons. And then the priest replies:

“The Lord, strong and mighty, the Lord, mighty in war!”

Once inside the church, more triumphant hymns are sung—including many versions of “Christ is Risen From the Dead”—and the Divine Liturgy is celebrated. The solea is filled with large baskets of food, decorated with fresh flowers. These will be blessed by the priest at the end of the service and then taken downstairs to be shared by all into the wee hours of the morning as the celebration continues. What was I doing while this was going on?

I was at one of the “after parties” held in the room adjoining mine at The Inn at Ole Miss. Sharing stories and laughter with fellow writers from other places. But the reality of what I was missing had grabbed my heart and would not let go.

On Sunday morning I drove Dinty Moore and Deborah Grosvenor from Oxford to the airport in Memphis to catch their flights home. The conversation was about publishing and writing, and yes, bits about our personal lives. And what a treat it was to have that time with these professionals in the industry.

But as soon as I dropped them off I raced to the home of my ten-year-old Goddaughter, Sophie, for the annual Pascha brunch her parents host. I embraced my husband and friends and enjoyed mimosas and good food and conversation. The Memphis Grizzlies’ playoff game was on the television and some folks were watching and cheering them on. Others were out on the patio by the swimming pool, soaking up the sunshine after many days of rain. I kept my sunglasses on, even inside the house. Everyone seemed to be bathed in a light that I had missed. I wasn’t glowing.

At 3 p.m. I drove to the church for Agape Vespers—the final service of Pascha. The Gospel is read in as many languages as we have parishioners who can speak them—this year it was eleven, I think. The floor is still covered in bay leaves and rose petals and the doors to the altar are flung open, and will remain so during all of Bright Week. At the end of the service, as people were filing out to head downstairs for the Easter egg hunt and the barbeque (catered by Corky’s) the choir sang several joyous Paschal hymns. I stood by the front pew, singing along with them and weeping with joy, but also with sadness for what I had missed.

As they were finishing up, I stepped up to Margaret Elliott, our wonderful choir director, and I said, “Are you taking requests?” The choir members who heard me smiled and exchanged looks with me and each other. Before she could answer I continued, “I missed Pascha and I really want to hear “The Angel Cried.” And so they sang it once again and I sang along and wept harder. (Listen to this amazing hymn here.) 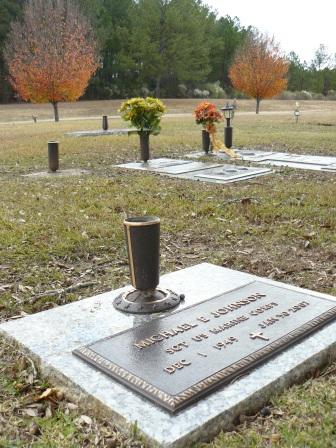 Every time I hear “The Angel Cried,” I think of Mary Allison Callaway, my precious Goddaughter who was killed by a drunk driver when she was only twenty, back in 1998. The words of this hymn are on her grave just outside of Jackson, Mississippi. Every time I visit (which is fairly often, as she is buried only a few feet away from my father and my brother) I stand by her grave and sing this song at the top of my lungs. I’m headed down to Jackson tomorrow to visit my mother and to attend a baby shower for my niece. But first thing, as I drive into town, I will stop at the cemetery and celebrate Christ’s resurrection at the tombs of these three people I love and miss. Although I’ve been in a bit of a spiritual crisis for the past three years or so (and continue in the struggle), I think the angels will join me as I sing at the cemetery tomorrow. It will be my own little Pascha.

8 thoughts on “Faith on Friday: The Things You Miss”