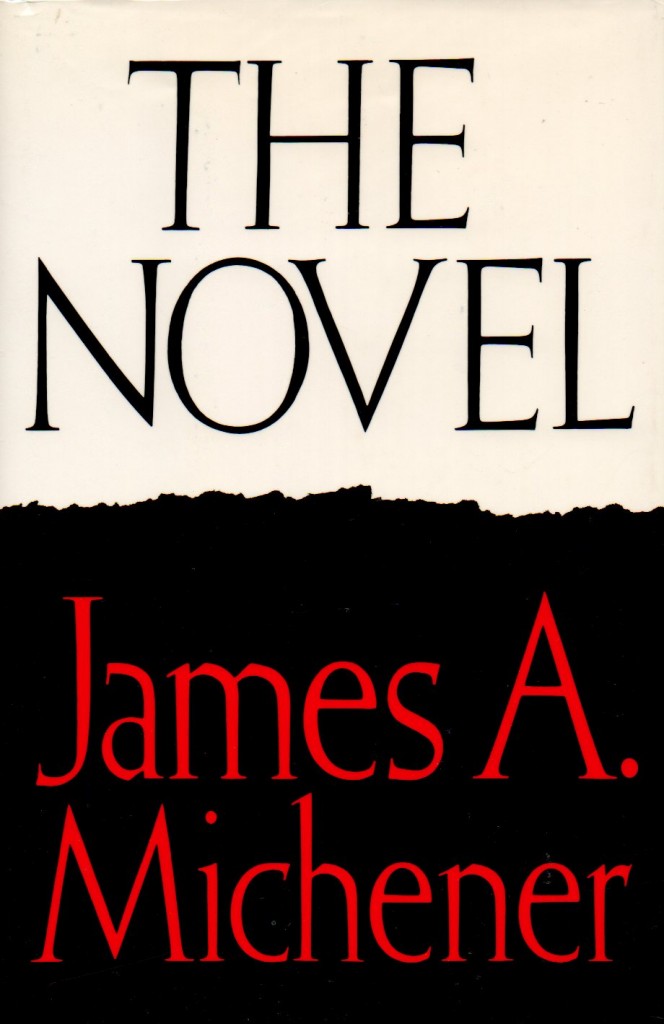 A few weeks ago I was sitting in the living room with my husband when I reached over to a bookcase and pulled out a random book. First of all, the bookcases in our living room are filled with: photo albums, high school, college and (husband’s) medical school yearbooks, and then mostly books we don’t read but look good on shelves, you know? The books I actually read are in my office. So, this book had a nice cover and heft. One of those books where the author is so well known that his name appears in letters as large as the book title: The Novel. James A. Michener.

Inside was the handwritten name “Leigh Ann Wilson.” And on the next page, in pencil, was written the price of the book when I purchased it: $1. I must have picked it up at a used bookstore one day and forgotten all about it. Exploring deeper, I discover that this was Michener’s 31st book, published by Random House in 1991. (Here’s a NYT review, if you’re interested.) So I turned to the first page and started reading. I think my husband was watching a football game, but I didn’t notice for the next couple of hours as I kept reading.

Of course Michener is a master at capturing worlds. South Pacific and Hawaii were my favorites back in the day. I love how he always has maps in the front that show the locale of the book in great detail. But he explored a different world in The Novel—the world of, well, the novelist. The Novel is really four novellas. Each is narrated by a different character, the first a Writer who writes a novel, the second an Editor who edits it, the third a Critic who reviews it, and the fourth, a Reader who reads it. And although the publishing world has changed a great deal in the twenty-one years that have passed since this book came out, I was fascinated by the way he unveiled the inner workings of the industry.

One of the first things I noticed was his beautiful literary descriptions. He spent a page and a half describing how one of his characters made German rice pudding, and I swear I could smell it and taste it by the time it was done. Here’s a segue to my novel. My freelance editor (and a few other early readers) made suggestions that I delete (or greatly shorten) most of the sections that described things in detail, like how to make egg tempera for icon painting, or how to make your own aerosol paint for graffiti. After reading Michener’s descriptive passages, I’m glad I left some of those in my novel. I figure if people aren’t interested, they’ll skim over those paragraphs, you know? But if they want all senses firing as they read, maybe they’ll slow down and savor the words. Not that mine can touch Michener’s. Listen to this:

“The art of making a true German rice pudding lies in starting with the right proportions of uncooked rice and rich milk; at the beginning it looks very watery, but as it bakes and the excess liquid vanishes in steam, the milk, eggs and sugar combine magically into one of the choices custards of all cuisines. But what makes the German pudding so wondrous to the taste is the intermixing of caramelized crust and the raising into the custard. A union like that does not happen accidentally.”

Are you drooling yet? And that was only one of six paragraphs he wrote about the pudding.

The section on The Editor was fascinating. It started with woman as a fourteen-year-old girl in the library, where she first discovered what would become her addiction, and later her vocation. Her response after reading her first novel:

“But what was most important was that the novel created an overwhelming sense of reality: Antonia was a living girl whose friends called her Tony, a name she despised, and her summer relatives were as real as my own family. It was such a sensational experience to become to familiar with other people’s lives that when I took the book back and I asked the librarian: ‘Did all this really happen?’ and she explained: ‘It happened, but only in the mind of the writer. And, of course, in your mind, too. That’s what a novel is. The exchange of dreams.”

The exchange of dreams. But getting those dreams from the mind of the writer to the eyes of readers is a strenuous journey. The sections on the Novelist revealed much of that journey, and gave me strength to continue my own:

“An artist is a creative man who cannot and indeed should not lead a normal life. He should find sustenance from trusted friends like himself. His task is to provide society with a fresh and sometimes necessarily acid portrait of itself.”

In the section on The Critic, I learned many valuable lessons as well:

“Get the characters lined up first, and make them real. Then have them move through the intricacies of plot and idea. Allow people to uncover the great truths upon which fiction rests, and from what you’re telling me, Karl, you’re not doing that. You’re putting your ideas, your message, first…. A novel has to be born in life, with characters whose passions and pains the author feels as keenly as if they were his or her own. I had filled my novel with illuminating ideas acted out by ill-defined characters who moved in obscurity…. It didn’t sing.”

What great advice for those of us crazy enough to try our hand at literary fiction. Who want to write books that sing.

I was a bit intrigued that The Novel didn’t include “The Agent” as one of its sections. It seems that the Editor played more of the Agent’s role in this book, and I wonder if that was true twenty years ago. I found this interesting chart someone made to show the production flow of a book, and the agent is central here.

Circling back around to my novel (with apologies) I have now received two rejections, but four agents are still reading it. A dozen or more others have not replied to my initial queries. The rejections, by the way, have been lovely. But the most pleasant surprise so far has been the emails I have received from two of the agents who are still reading my manuscript. They were both affected greatly by the storm in New York City, and wrote to apologize for taking so long to get back to me! I was humbled by their incredible manners. They both only received the manuscript a week or so before the storm hit, causing flooding in their homes and power outages in their offices. And yet they took the time to apologize for their delay? Very humbling. I hope to land in the hands of one such compassionate professional. Please stay tuned.