If you’re on Facebook, you’ve already seen how I photo-bombed the place all weekend with pictures from the 2018 Pulpwood Queens Girlfriend Weekend in Nacodoches, Texas. And here’s a fun blog from River Jordan about the event: “Leaving Nacodoches.” It was a treat to have River spend the night with us in Memphis last night on her way home to Nashville, so we could rehash the weekend a bit. By the way, Nacodoches is the oldest town in Texas, and a lovely, quaint, artsy, little town. Wish I had had more time to explore while I was there. Maybe next time!

There’s so much I could say about the weekend… a wonderful time to get to know other authors and to visit with the ones I know and rarely get to see. Also great to meet so many enthusiastic book club members and readers, all lovers of good books. The theme was “Bohemian Rhapsody” so there were lots of costumes, as we dressed as hippies, gypsies, anything Bohemian, and favorite authors.

I was blessed to be on two panels during the weekend:

Thursday night: As editor for A SECOND BLOOMING: BECOMING THE WOMEN WE ARE MEANT TO BE (with contributors River Jordan, Julie Cantrell, Susan Marquez, and NancyKay Wessman.)

Saturday afternoon: For my novel CHERRY BOMB, I shared a panel with three other authors whom I had never met: Deborah Rodriguez, Patricia V. Davis, and Stephanie Chance. Pulpwood Queens Founder Kathy Murphy moderated the panel.

After each panel, the authors went to the signing tables, where readers brought books they purchased from Murder By the Book, who were the book vendors for the weekend. All of this was pretty typical of a book festival. What wasn’t typical was the amount of time the authors and readers had to really hang out together and get to know one another. On Friday night the authors served the tables at the barbeque dinner for the readers. And all during the weekend there were opportunities to eat together or just visit over car or a drink at the bar. It’s a pretty magical event.

Something I loved was the silent auction. Authors brought items—often related to their books—for sale to benefit the Pat Conroy Literary Center. I was happy to sell a canvas print of the “weeping” icon of Saint Mary of Egypt that I painted, which is featured in my novel CHERRY BOMB. And I made two purchases (of course): a set of Mexican pottery from Deborah Rodriguez, and a painting by Nicole Seitz called “Setting Free,” which has layers of meaning for me.

I’ve shared a few photos (lots more are on Facebook, as I mentioned) but I’d also like to share something about the 6 books I purchased from authors I met this weekend. I’m sure some of these will show up as book reviews here on my blog in the future. Although there were several New York Times best-selling authors at the event, some of the books that caught my attention were by lesser-known writers, and I can’t wait to read them: 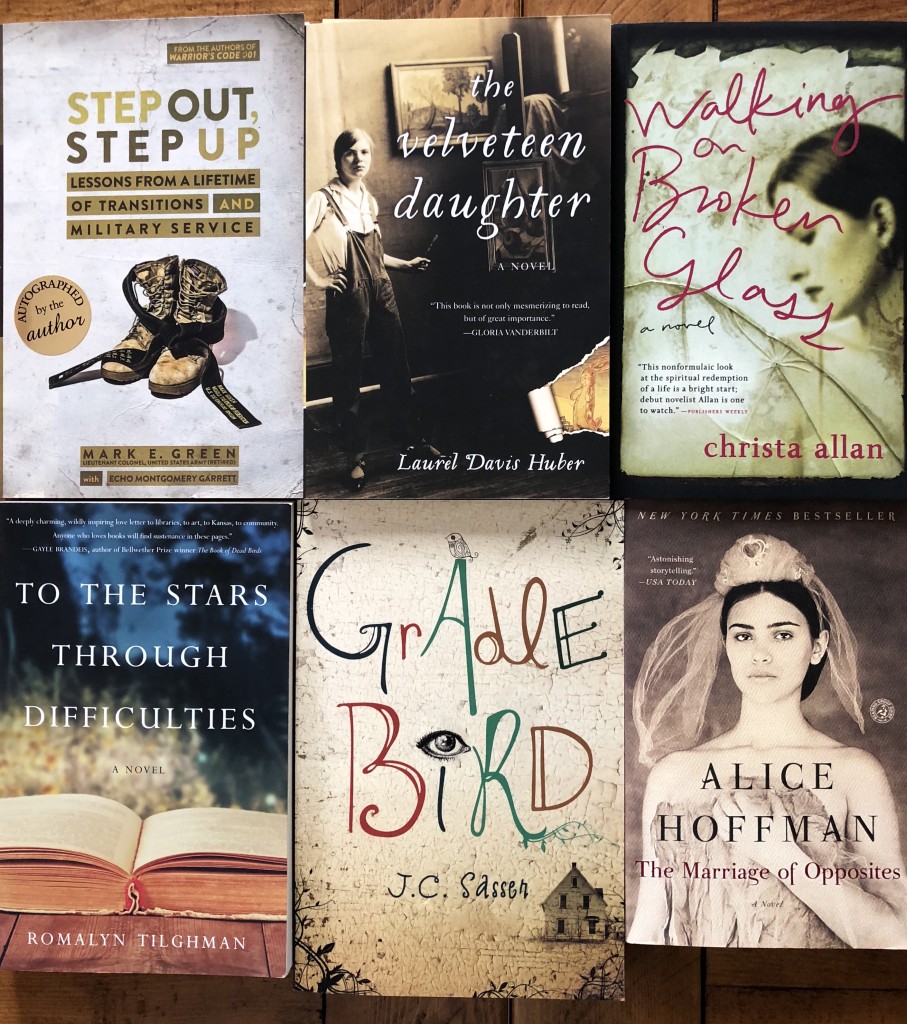 GRADLE BIRD is J. C. Sasser’s first novel. I’m intrigued by the protagonist, sixteen-year-old Gradle Bird, who lives with her grandpa in a seedy motel and truck stop in Georgia. I think that she and Mare—the protagonist in my novel CHERRY BOMB (a sixteen-year-old runaway orphan who becomes a graffiti artist)—would be best friends! At one point during the panel that J.C. shared with Nicole Seitz and Bren McClain, J.C. mentioned that Gradle Bird and the other nobels on the panel were considered “Southern Gothic.” As she described the term, I wondered if CHERRY BOMB might also fit into that genre…. although I marketed it as Southern literary fiction. Anyway, GRADLE BIRD is on top of my “to read” stack from the weekend!

THE VELVETEEN DAUGHTER is Laurel Davis Huber’s first novel. I enjoyed getting to know Laurel during the weekend, and learning that we are the same age and on a similar trajectory in our writing careers. We also learned that we both love art and it plays a major role in both of our debut novels. Can’t wait to read THE VELVETEEN DAUGHTER, which is about Margery Williams Biano, the author of The Velveteen Rabbit, and her daughter Pamela, a world-renowned child prodigy artist

TO THE STARS THROUGH DIFFICULTIES by Romalyn Tilghman caught my interest because it features women who are descendants of the women who built fifty-nine Carnegie libraries in Kansas a century earlier. It’s about the importance of art and literature, and especially libraries, in our lives. Having visited six Friends of the Library groups in small towns all over Mississippi to talk about my novel CHERRY BOMB this past fall and winter, my interest in libraries has grown, and I can’t wait to read this book. And… a conversation I had with Romalyn this weekend sparked an idea for my next novel. Stay tuned!

WALKING ON BROKEN GLASS isn’t Christa Allan’s latest book, but it’s the one I bought after visiting with Christa this weekend. The subtitle for the books is FACING SOBRIETY WITH SOUTHERN CHARM. It’s about a southern socialist who goes to rehab. As Publisher Weekly says: “This nonformulaic look at the spiritual redemption of a life is a bright start; debut novelist Allan is one to watch.” Christa’s recent novel, which she spoke about on her panel Saturday afternoon, is BECAUSE YOU LOVED ME.

THE MARRIAGE OF OPPOSITES also isn’t the novel that Alice Hoffman came to talk about this weekend. Hoffman is the author of Practical Magic, which was made into a movie. And about 30 other books! As a New York Times best-selling author, she was a keynote speaker on Saturday morning. She talked about how “writing is the most interactive of all the arts,” and “why reading is better than sex.” And she talked about “inside and outside stories in a novel—inside being what’s happening emotionally.” Lots of inspiration for authors and readers alike. But I was drawn to THE MARRIAGE OF OPPOSITES because it’s about a famous artist and takes place in France… a favorite topic and location for me!

STEP OUT STEP UP: LESSONS FROM LIFETIME OF TRANSITIONS AND MILITARY SERVICE by Mark E. Green, Lt. Col., U.S. Army Retired (co-written with Echo Montgomery Garrett) is a book I bought for my oldest son Jonathan, who is a retired Army helicopter pilot. I enjoyed visiting with Mark and Echo, especially learning about Mark’s experiences with the 82nd Airborne and his service in Afghanistan. In his retirement Mark helps those in military service, veterans, and their families with resiliency and transition. I look forward to hearing what our son thinks of the book.

That’s all for now. Stay tuned as I move forward with a new novel and get busy with pre-marketing for SOUTHERN WRITERS ON WRITING.