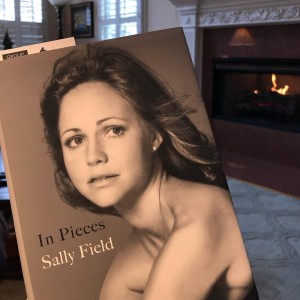 It’s been a few years since I read and reviewed a celebrity memoir . . . . back in 2014 I reviewed Diane Keaton’s book, Let’s Just Say It Wasn’t Pretty. She still remains my favorite actress, but I’m also a big fan of Sally Field. So when I saw she had a memoir out—In Pieces—I was immediately interested. And she wrote it herself—taking seven years and lots of literary and emotional energy to achieve what I think is a really good memoir. This article in the New York Times says that Fields “reveals a personal history, darkened by abuse and illuminated by grace, that she has never shared before.”

One thing I loved about the book was how Field writes with such immediacy, often saying that she “only now” realizes such and such about an event from her childhood or early adulthood, as she is writing the memoir. Writing in present tense increased this feeling of immediacy—of discovery—which is so important to memoir. As writers we often write to understand our world and our lives, and this is definitely the case with Field’s memoir.

If you don’t already know, or suspect, she was sexually abused by her stepfather for much of her childhood. But she didn’t know until she was in her sixties and her mother was in her eighties that her mother knew about it—or some of it—and did nothing. I wept as she described her reconciliation with her aging mother, wishing that I had talked with my own mother about my grandfather before she lost her memories to Alzheimer’s. It’s always been my fear that he molested her, as he did me, which would explain a lot about her obsession with food, weight (hers and mine), and later her alcoholism. I hope that my readers—and especially Field’s readers—will seek out the people in their lives with whom they need to have healing conversations while they are still alive.

One thing that struck me strongly in the book was how Field wasn’t able to really enjoy her success as an actress. Even when she won the Academy Award for Sybil, her first serious acting role, her self-image was so damaged that she couldn’t really let herself celebrate. By the time she landed the role of Mary Todd Lincoln, her confidence had grown, but there is always a shadow over her joy. She grows into a wise woman, though, and I’ll close with these words near the end of the memoir:

How you care for your child from the time they are born until they’re eighteen is important, but who you are as a person and parent for as long as you live also counts, and counts one hell of a lot.