Memories aren’t always happy. Or mentally healthy. But the ones I’ve been having all weekend as my husband and I celebrated our 45th wedding anniversary have brought joy and laughter, which is a good thing. When we got married—on June 13, 1970—we were barely 19 and 21 years old. Our families didn’t have money. We were married in a Presbyterian Church and had the reception in the fellowship hall, serving only cake, punch, and mints. Our budget was $500, the amount my father (humorously) offered us to elope and save my mother the stress of putting on a wedding. It’s amazing I passed all my classes that spring, since our wedding invitations were late coming from the printers and I ended up addressing them while studying for final exams. And in typical Effie (my mother) style, Mom had sent me the Jackson phone book, in which she had highlighted all the people she wanted me to invite. 400 invitations. 3.25 GPA. Not bad, huh?

Bill’s grandfather gave us money—I think it was either $100 or $150—for our honeymoon. (He had given us his wife’s engagement ring already—they were married for over 50 years when she died.) Anyway, $150 went a lot farther back in 1970 than it does today! We booked two nights at the Broadwater Beach Hotel in Biloxi, Mississippi, but we wanted to stay in Jackson the first night, so Bill got us a room at a Holiday Inn in South Jackson, which would be on the way to the coast the next day. 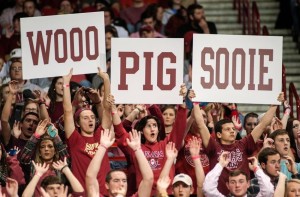 As fate would have it, a bunch of kids from the University of Arkansas were staying at the same hotel for some event. Our room was right by the swimming pool, where those same kids were partying late into the night. So, on what should have been the most romantic night for newlyweds, we kept hearing a bunch of drunk Razorback fans calling the hogs:

This is what it sounded like. It would have been bad enough for any newlyweds, but especially for us. Bill had just graduated (as Senior Class President) from Ole Miss two weeks earlier, where I finished my freshman year. I guess the only thing that could have been worse would be listening to “Roll, Tide!” all night!

The next day we headed down to the Broadwater Beach Hotel, which had received significant damage just ten months earlier at the hands of Hurricane Camille. But it had recovered enough to offer an old-beach charm. I always loved their lighted 3-par golf course, which was so much fun to play at night.

Dinner at nearby Mary Mahoney’s Restaurant was a highlight of our two-day honeymoon, offering the romance that was so badly lacking back at the Holiday Inn in South Jackson where the Razorbacks were partying.
The Mississippi Gulf Coast will always hold a special place in our memories, even with the multiple face-lifts it has received over the years, the most devastating, of course, being at the hands of Katrina, ten years ago this August. I’m sure we’ll revisit this place of our early memories again one day soon.