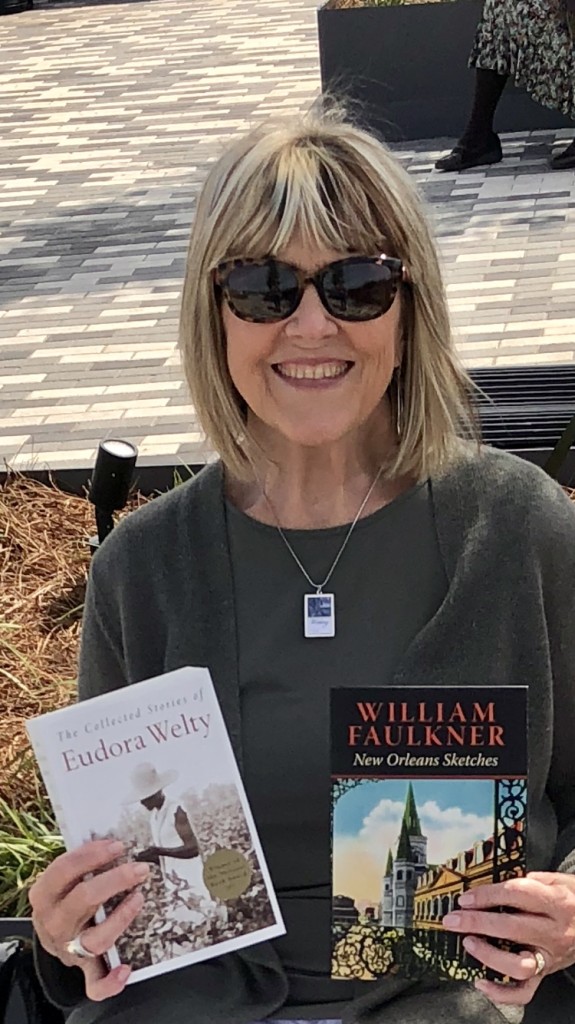 I’m in New Orleans for a few days, thanks to my husband who is speaking at the American College of Physicians’ annual meeting. I love this city, and there’s an added perk—out oldest son Jonathan lives here. Jon makes our dinner reservations (and brunch today at Commander’s Palace) and we always eat well when we’re here!

But today I’d like to write about something literary. Yesterday when I was in the Quarter, I visited Faulkner House Books—a tiny treasure trove tucked in behind St. Louis Cathedral in Jackson Square on Pirate’s Alley. I’d been here several times in the past, but not since I’ve been a published author.

When I first walked in, I was reminded of how small and yet exquisite the space is. I can’t imagine how they decide which books to carry, and I was greeted on the 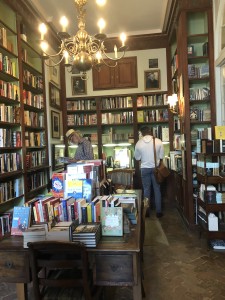 front table by William Faulkner’s New Orleans Sketches, published by University Press of Mississippi in 1958—when I was only 7 years old. Faulkner was a young man living in New Orleans when he wrote these “sketches” in 1925. He had primarily been writing poetry at this point, and these short pieces are a prelude to his powerful fiction, which would follow. Edited by Carvel Collins (1912-1990), one of the foremost authorities on Faulkner’s life and works, who was the first to teach a course devoted to Faulkner’s writing, at the University of Notre Dame, says in the Introduction:

Elements of Faulkner’s later techniques are in these early pieces, which also show at times his mature power, control, and confidence, even though the series is very often marred by his groping, in apprenticeship, for style and literary attitude…. In 1925 in New Orleans he had turned to fiction with full force. During the following years, by developing many of his themes, techniques, thoughts, and feelings which first appeared, often dimly, in these apprentice piece, William Faulkner published more than twenty volumes of fiction, some of them among the best to appear so far in our century.

I sat by the river watching the barges go by—wondering if any of them had gone just past our house in Harbor Town in Memphis—and soaking up the gentle warm breeze and reading. It was a magical afternoon. I love Faulkner’s Sketches. Here’s a taste from one titled “The Artist,” which read more like mini-essay than flash fiction, which most of the others resembled:

A fire which I inherited willy-nilly, and which I must needs feed with talk and youth and the very vessel which bears the fire: the serpent which consumes its own kind, knowing that I can never gives to the world that which is crying in me to be freed…. But to create! Which among ye who have not this fire, can know this joy let it be ever so fleet? 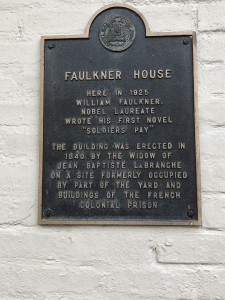 My heart beat faster as I recognized that fire—although it came to me in the latter half of my life rather than in my youth. And I beamed with pride as I told the bookseller at Faulkner House Books about my own books, and she said she was sure they would carry Southern Writers on Writing when it comes out next month, and then she gave me an author’s discount on my purchases. We also talked about M.O. Walsh’s wonderful novel My Sunshine Away—which was on their shelves—and I told her that he had an essay in Southern Writers on Writing.

Another of my purchases was The Collected Stories of Eudora Welty, published in 1980. Of course I had read a number of her short stories over the years, but with my current work-in-progress—Friends of the Library, a collection of short stories—I am now reading them through a different lens. And I was very interested in her words in the Preface:

In general, my stories as they’ve come along have reflected their own present time, beginning with the Depression in which I began; they came out of my response to it. The two written in the changing sixties reflect the unease, the ambiguities, the sickness and desperation of those days in Mississippi…. They, like the others, are stories written from within. They come from living here…. What I do in writing of any characters it to try to enter into the mind, heart, and skin of a human being who is not myself. Whether this happens to be a man or a woman, old or young with skin black or white, the primary challenge lies in making the jump itself. It is the act of a writer’s imagination that I set most high.

I can’t wait to immerse myself in some of those stories as I continue revising my own collection of stories, hoping to in some small way emulate her approach, as I know I can never come close to her genius and style. Or to Faulkner’s. But wow what wonderful treasures to have as my Mississippi forebears in the fiction world.

Other “sketches” of my New Orleans visit include a wonderful visit with my friend Emma Connolly, who moved here from Memphis a few years ago to open Uptown Needle and Craft Works—her own sewing shop on Magazine Street. Emma is also a writer, and contributed an essay to the first anthology I edited, A Second Blooming: Becoming the Women We Are Meant to Be. (She was one of the women who inspired the book, actually.)

And lunch with our mutual friend Patsy Davenport, at the wonderful French Laundry Bakery, right next door to Emma’s shop. Patsy and I have been Facebook friends for a while, and it was great to finally meet her in person. Retired from a career with McGraw Hill, she turned 70 recently and is on a mission to visit 70 bookstores in one year. She’s over half-way there! 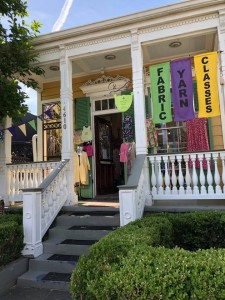 We’re headed back to Memphis tomorrow, but my heart and belly are full of the delicious treats this city offered me, and my creative juices are flowing as I return to work revising my short story collection… with help from Faulkner and Welty. 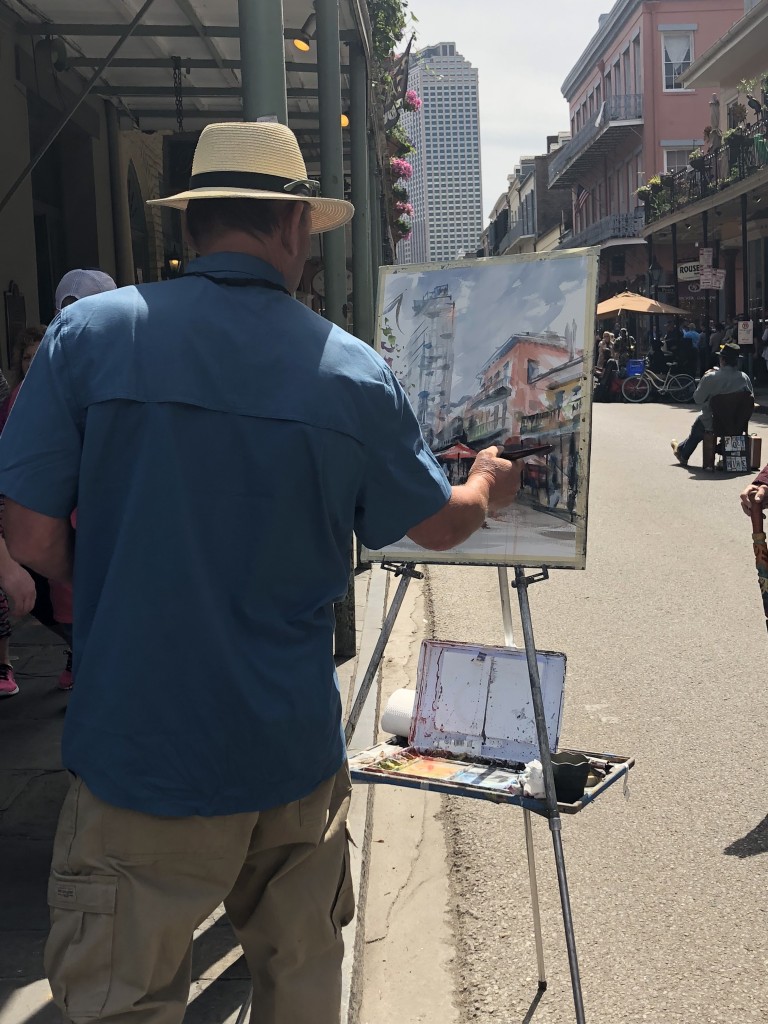