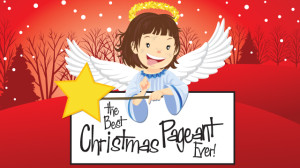 In the late 1980s through the mid 1990s, I wrote and directed the annual Christmas pageant at our church here in Memphis, St. John Orthodox. Our own kids were in elementary and middle school during those years. The participants in the play each year were between three and about twelve—sixth graders being the oldest. (The high school kids did a different play each year—one about Saint Nicholas.) I have such wonderful memories of those pageants and the children who brought them to life each year. One little boy was a trouble-maker during practices, but always came through with a great performance in the end. What I didn’t recognize at the time was his higher intelligence… he was bored at practice and didn’t see a need to put forth any effort or follow any rules. Today he’s happily married with a creative and successful career. And one year one of the mothers of several children in the play gave me a copy of The Best Christmas Pageant Ever and I read it every year for a while…. Wish I could find it again.

And then there was the year I almost (or did this really happen?) caught Sarah Mashburn’s hair on fire. She was playing the part of Saint Lucia, who had a crown of candles on her head. One year we had musical instruments—the three wise men played their recorders (plastic tonette flutes they learned to play in school) and two girls who were studying ballet did a lovely pas de deux as Mary and the Angel Gabriel. I remember each of these events with less clarity about the details but great emotional imprint. And of course there were often moments of humor. But none so funny as what happened yesterday 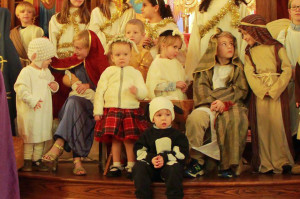 So, yesterday at St. John, a different generation of children offered the Christmas pageant to a packed house in the nave (sanctuary). Terrific costumes. Booming, clear voices reciting their parts. Lovely choir of angels singing both Orthodox and traditional Western Christmas carols. And then there was drama over Baby Jesus.

Claire, the director of the play, cast her oldest daughter, Zoe as Mary, and her younger daughter, Audrey, was one of the little lambs. Zoe was a terrific Mary, saying her lines clearly, remembering her movements as she entered and exited the solea (stage area) several times, first when she was greeted by the Angel Gabriel, later greeted by her cousin Elizabeth, and finally journeying with her husband Joseph to Bethlehem, looking for shelter.

Once Mary and Joseph arrived at the stable and Jesus was born, the excitement began. Baby Jesus was placed in the manger, and the wise men and shepherds and animals came to worship him. The youngest children were the animals. So when little Audrey came in with the sheep, she hurried to the manger where she tried to grab baby Jesus. Mary (her big sister) had to struggle with her, swatting her hand away from Baby Jesus as Audrey tried to climb up on the chair with Zoe and tugged at the Baby until Claire (her mother) finally had to come up on the stage and take Audrey out. The cause of the ruckus? One of Audrey’s dolls had been cast as Baby Jesus. Later Claire recounted the story on Facebook and said that all the way home in the car after church Audrey kept saying, “That is NOT my sister’s baby!” 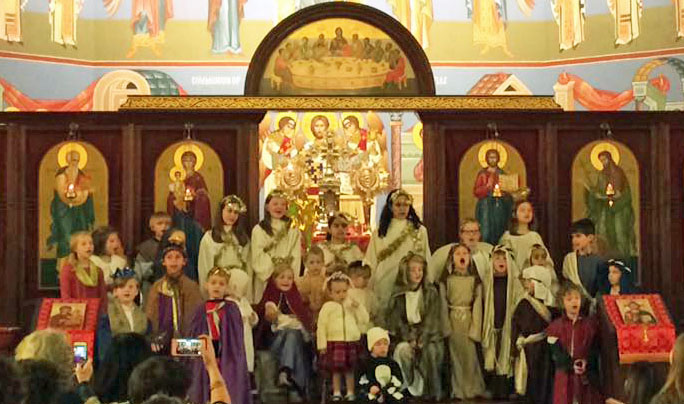 Humor is always a welcome element in any drama. And the shining faces of the children as they brought their gifts to Jesus in their acting and singing reminded all of us that He really is the reason for the season. I hope you and your family are catching this joyful spirit as you prepare to celebrate His birth.

Much love to all.