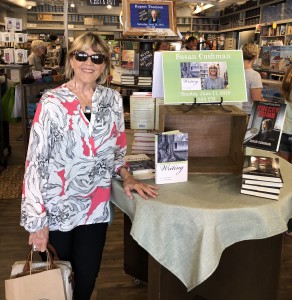 110 years ago, in 1908, 500 “free thinking people” seeking “their own special utopia” established the town of Fairhope, Alabama on a bluff overlooking the Mobile Bay. I love this part of the history of Fairhope:

Over the years artists, writers, and craftsmen have found Fairhope to be an inspiring haven for their work and have helped to make the community what it is today.

Since my first visit to Fairhope in 2007, I’ve done numerous blog posts about some of the trips I’ve made back there, usually for literary events. What an amazing town! At the end of this post, I’ve put links to some of those earlier posts, with a few comments for anyone who is interested. (All that is what writers call the “back story.”) But now I’d love to share about my 12th (or maybe 13th?) visit to Utopia, just two days ago.

It was a short drive to Fairhope from Orange Beach, Alabama, where I was speaking at the Alabama Writers Conclave Conference on Saturday and Sunday. I was joining two local authors—Joe Formichella and Suzanne Hudson—for a panel on SOUTHERN WRITERS ON WRITING at Page & Palette Books. [Side note: In 2007 when I was starting this blog, I wanted to use the name Pen & Palette, so I Googled the term, and Page & Palette came up. I visited the store for the first time that same year.] So many wonderful things about this event to share!

First of all, three of my favorite Orthodox friends showed up. Lia Roussos Douglas, known on Instagram as the “Sassy Greek Girl,” and Lacey Childress were both members at St. John Orthodox Church in Memphis years ago, and now both live in Gulf Shores, Alabama. And Katherine Thames, one of my beloved Goddaughters, came over from her home in Gulfport, Mississippi. It was a fun reunion, and I only wish it could have lasted for days. I feel a girlfriend beach trip in our future! 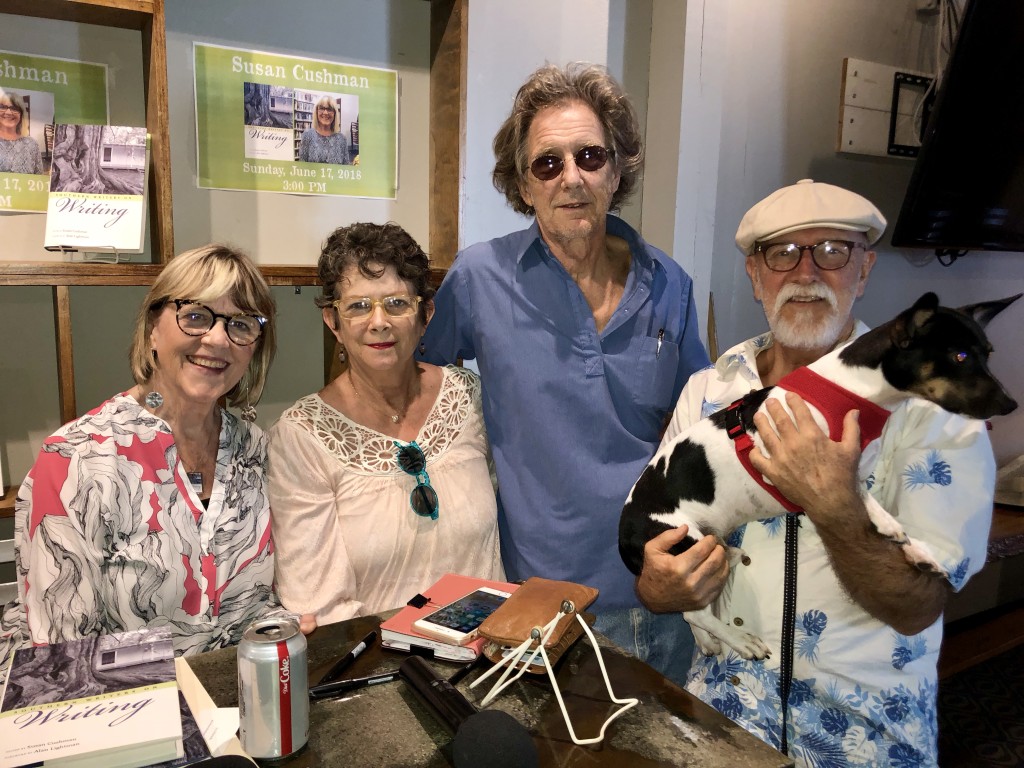 Another fun part of the event was that Sonny Brewer, Farhope author of The Poet of Tolstoy Park and other books, insisted on introducing us at the reading. He was accompanied by his dog (yes) Bobby, who will make an appearance soon in an upcoming issue of Garden and Gun Magazine. Sonny wrote a story about Bobby for the magazine. It was fun seeing Sonny again after first meeting him ten years ago, and later having him (and Joe and Suzanne) critique an early chapter of my novel CHERRY BOMB, which was finally published last year. 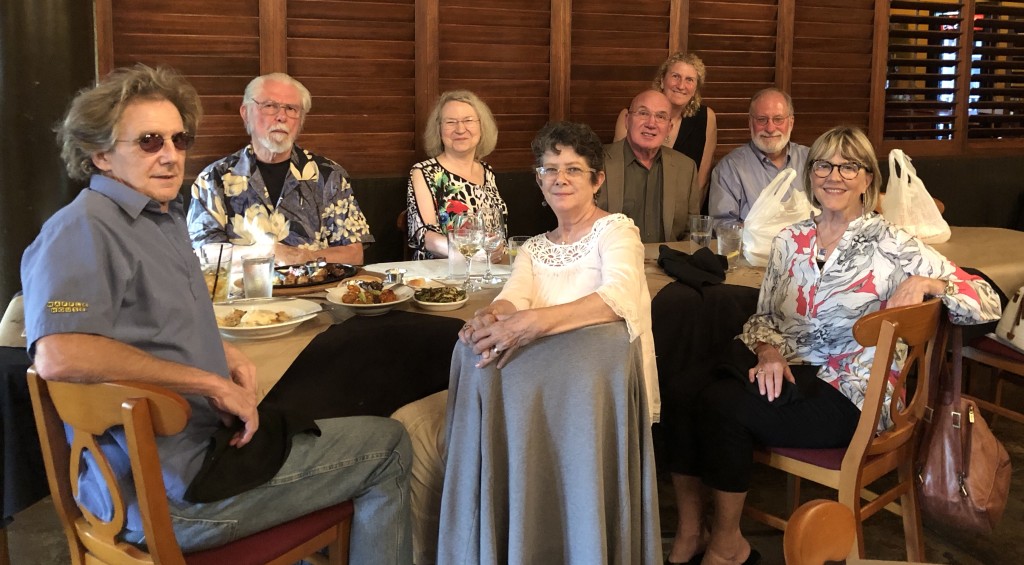 Other Fairhope writers showed up at the reading and later at dinner right down the street at Tarmara’s Downtown. Here’s more of that “story come full circle”—P.t. Paul and Robert O’Daniel are both in a writing group with my friend Ren Hinote (who was sick and couldn’t come on Sunday) that ALSO critiqued part of CHERRY BOMB a number of years ago. So I feel that the literary magic of Fairhope dwells in my first novel and will always inspire me. There was a good crowd – I’m so thankful to all the folks who came out on Father’s Day afternoon – and we had fun talking about southern literature. 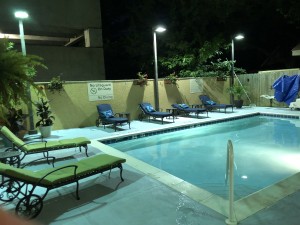 Bill and I ended up staying at the Hampton Inn, just down the street from the bookstore and the restaurant, so we checked into the hotel on Sunday afternoon and didn’t get back in our car until we left for Memphis the next day. It was so fun to just walk down the beautiful street to our events. Also to swim in the hotel pool Sunday night and again on Monday. It reminded me of the joy of swimming in a Holiday Inn pool when I was a kid. (Also—bad review alert—the pool at the Micro-Tel Inn and Suites by Wyndam in Gulf Shores was BROKEN while we were there over the weekend. Yes. In June. So was the smoke alarm in our room. I won’t go on, but I could.)

We returned to Memphis yesterday refreshed and with wonderful memories of our weekend on the Alabama Gulf Coast. And especially our visit to Utopia.

Here’s the “back story” I mentioned at the beginning of the post.

Fairhope (2007) is about my first visit to Fairhope. I was on a personal “retreat” at Gulfshores and decided to drive over and see what all the hoopla was about. I was hooked.

The Other Side of Civility (November 2008) This post is about my second visit to Fairhope, almost ten years ago, for the last “Southern Writers Reading” event, hosted by Sonny Brewer. This was the year I met Sonny, and also Joe Formichella, Suzanne Hudson, Jennifer Horne, and Wendy Reed. Our friendships have grown over the years and we’ve swapped “editor hats”:

Jennifer and Wendy edited CIRCLING FAITH: SOUTHERN WOMEN ON SPIRITUALITY (2012), the first book I was every published in. I contributed an essay.

Joe (and unofficially Suzanne) edited the anthology THE SHOE BURNIN’: STORIES OF SOUTHERN SOUL (2015) in which I had an essay.

I edited A SECOND BLOOMING: BECOMING THE WOMEN WE ARE MEANT TO BE (2017) with essays by Jennifer and Wendy included.

And last month my anthology SOUTHERN WRITERS ON WRITING came out, with essays by Joe, Suzanne, Jennifer and Wendy.

Fairhope Writers (March 2011) in which I write about meeting with a group of writers at Ren Hinote’s home. The group included Robert O’Daniel and P.t. Paul, both of whom I have stayed in touch with and enjoyed seeing on Sunday. This group actually critiqued a chapter of my novel CHERRY BOMB, which was published in 2017.

Fairhope Writers Colony Retreat (June 2011) about the “colony” organized by Sonny Brewer, which I participated in.

A Secret Word (June 2011) talks about the writer Jennifer Paddock, who was one of the speakers at the Fairhope Writers’ Colony, in which I was a “colonist” that month.

Surviving the Arena (February 2013) has pictures and narrative about the first “Shoe Burnin’” I attended at Waterhole Branch (near Fairhope) where a group of authors and musicians gathered to tell stories and throw shoes into the bonfire.

I didn’t do a post about my visit in July of 2013, when I drove down to participate in a video to market the upcoming collection THE SHOE BURNIN’: STORIES OF SOUTHERN SOUL, at Joe and Suzanne’s home in Waterhole Branch. The reason I didn’t do a post is because I had a wreck that night and broke my neck and leg and ended up in the hospital. When I got back to Memphis, it was several weeks before I could blog again….

Waffle House Rules (2016) tells about the literary salon I hosted for Fairhope authors Joe Formichella and Suzanne Hudson in our home.

Book Tour Continues (2017) mentions my first reading at Page & Palette in Fairhope, for my memoir TANGLES AND PLAQUES: A MOTHER AND DAUGHTER FACE ALZHEIMER’s. I returned to P&P on November 2, 2017, for a reading and signing for my novel CHERRY BOMB, but I guess I didn’t do a blog post about that one.

I know I visited Fairhope a couple of more times with Daphne Davenport, Susan Marquez and NancyKay Wessman, for wonderful girlfriend weekends at Ren Hinote’s home, but I must not have blogged about all of those visits. Imagine that. Somehow I will just have to remember them….