Friday I had lunch with Kathy Moore Kerr at Char, my favorite restaurant in Jackson, Mississippi. (Can’t believe we didn’t take a selfie!) Kathy was matron of honor at my wedding, 48 years ago June 13. We’re in touch on Facebook and Kathy has come to several of my book signings at Lemuria, and is a big fan of my writing, which I greatly appreciate. But we haven’t gotten together for a visit one time in the 48 years since she was in my wedding! We talked about why that happened—how our lives took off in such different directions, although we lived in the same city from 1970-1988, when I left Jackson for Memphis. It was wonderful to catch up with her.

And not too long ago I had lunch with another classmate, Cissy Jackson Carter, which we’ve done a couple of times in the past few years, and we talked about our memories of high school and what our lives have been like since. The older I get, the more I value those memories and the people I “came of age” with back in Jackson.

But when I walked into the restaurant yesterday to meet Kathy, I ran into four more of our classmates who live in Jackson—Ginny Wright Phillips, Susan Sledge Ingram, Jane Conner Walsh, and Nell Inda Breed Lutken. I wish I could have visited with all of them!

I was so excited when I heard that my 50th high school reunion—for the Murrah High School Class of 1969 in Jackson, Mississippi—was scheduled for next April rather than in the heat of the summer.  And it will be at a lovely new venue in Brandon called McClain Lodge. I was about to make a reservation for my husband and I to spend the night there the evening of the reunion, when I thought for a minute about the date. April 27, 2019. What could possibly conflict with that date, almost ten months away?

The only thing I could think of that might keep us away from the reunion was Pascha—Orthodox Easter. So I Googled “Orthodox Easter,” and wouldn’t you know it’s April 28 in 2019. (In case you weren’t already aware that Eastern and Western Christians celebrate Easter on different dates most years, here’s a little more about that.)

Why is this such a big deal to me? My husband and I are converts to the Orthodox faith. After leaving the Presbyterian Church and going on a seventeen-year (yes!) spiritual journey with a group of other Southern Protestant ex-pats in the 1970s and ’80s, we landed in the Antiochian Orthodox Church in March of 1987. Pascha—the celebration of Christ’s resurrection—is the highest feast of the year. As a lay person, I’ve only missed it twice in the thirty-one years since I’ve been Orthodox. And my husband—whose day job is working as a physician—is also an ordained Orthodox priest, and he has never missed Pascha. Since 1988, when we moved to Memphis, he has served as Associate Pastor of St. John Orthodox Church. It would be unthinkable for him to miss Pascha.

When I told my classmate A. B. Clark Nichols, who keeps all of us informed about the goings-on of the class of 1969 and is one of the major organizers of the reunion, about my conflict, she was sad that I would be missing the reunion. She said the committee was considering adding an event on Friday night, the night before the main event, and would I be able to come then? I responded by telling her about Holy Friday, and the wonderful services that day and evening. And Holy Saturday, and how my husband always leads that service at 10 a.m. on Saturday morning. So no, we wouldn’t be able to come on Friday night, either.

The situation also reminded me that although Orthodox Christianity is the second largest Christian denomination in the world—second only to Catholicism—it is very much in the minority in the southern part of the U.S. In my high school class of just over 400 people in Jackson, Mississippi, I think that only three of us are Orthodox, that I’m aware of. One is Greek and was probably baptized and grew up in the Greek Orthodox Church.  And one other person who became Orthodox at the same time as I did, in 1987. So, it looks like Orthodox Christians represent about 0.75% of our class. Definitely a minority.

All this to say that while I am very sad to be missing this milestone—one’s 50th high school reunion is a big deal—and especially the chance to visit with so many old friends, it’s understandable that the planning committee didn’t notice that April 28, 2019 was the date for Orthodox Easter.

This conflict of cultures is one of the reasons I wish that the Orthodox Church celebrated Pascha on the same date as Western Easter. Having different dates often puts us out of sync, not only spiritually—going through Lent at different times from our Catholic and Protestant friends—but also with family events. When our daughter was playing competitive soccer, we missed Palm Sunday more than once because there was an important soccer tournament in Texas or Oklahoma that weekend, which was Easter weekend for most of her teammates and their families. I wondered why they didn’t mind missing Easter back home in their churches, but for many people Easter week/weekend is just a secular vacation like spring break. 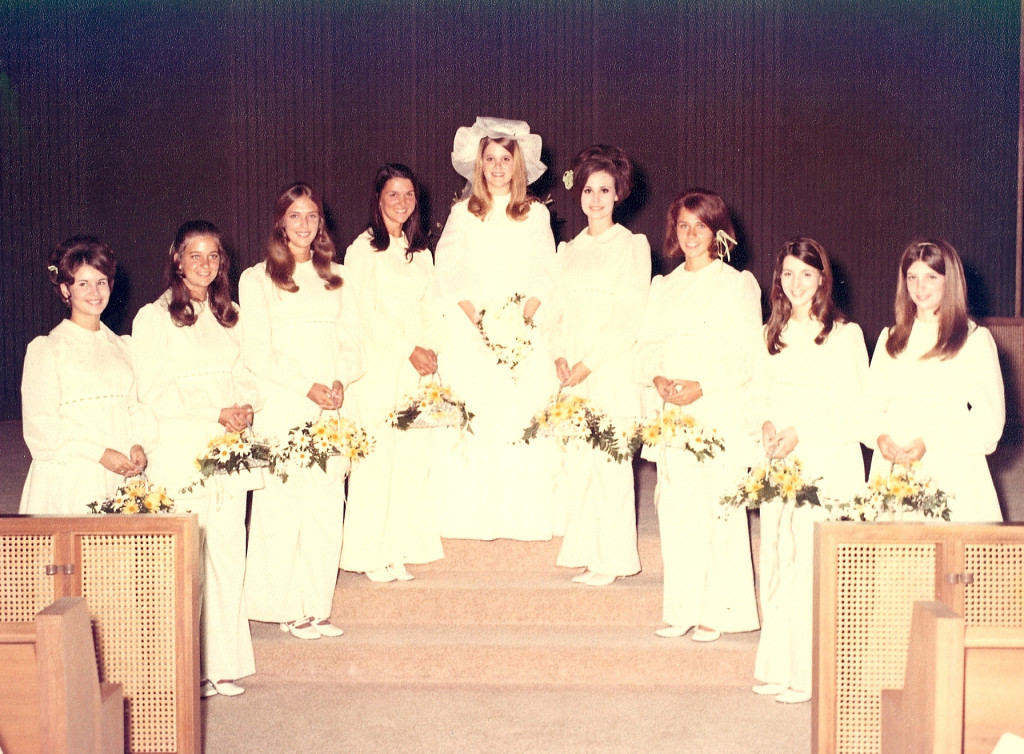 Six of my eight bridesmaids back in 1970 were classmates from the Murrah High School class of 1969: Kathy Moore (Kerr), Penny Shelton, Sally Sherman (my roommate my freshman year at Ole Miss), Kay Wilkinson, Sandra Kerr, and Brenda Logan. And nine of my eleven tea girls (remember when we had tea girls?) were also classmates: Kathy Fitts, Margaret Irby, Phyllis Ainsworth, Sharon Scott, Pat Pray, Elizabeth Cochran, Claire Hines, Louise Wise, and Karen Himes. (Phyllis, Pat, Claire and I pledged Tri Delt together at Ole Miss in the fall of 1969.) I was hoping to get to visit with many of them at the reunion, another reason I’m sad about the conflict. 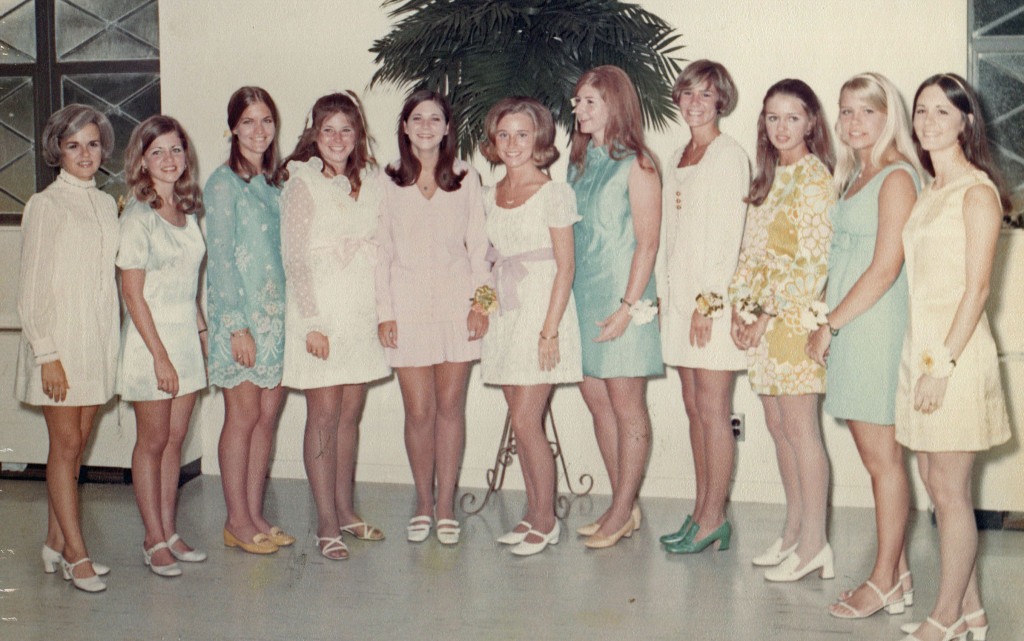 Knowing that I’ll miss the reunion motivates me to try to get/stay in touch with more of my classmates in other ways. Many of them live in Jackson, but I don’t visit as often as I did when my mother was living. It’s only 200 miles away, so maybe I’ll just schedule some mini-reunions as we approach 50 years. And of course I’ll think about everyone at the reunion on April 27 when I’m at St. John Orthodox Church in Memphis late into the night and early into the morning of the 28th, shouting joyfully with my fellow parishioners, “Christ is risen! Indeed, He is risen!” (Under my breath I’ll be thinking, “Go, Mustangs!” and humming “Be young, be foolish, be happy!”)