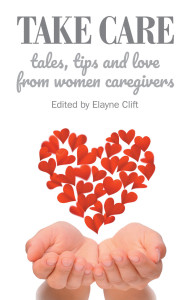 Some time last year Elayne Clift invited me to contribute an essay to an anthology she was putting together. It was going to be about women caregivers. Ironically, I was already working on my book, Tangles and Plaques: A Mother and Daughter Face Alzheimer’s. I thought about contributing an excerpt, but I chose something different. I sent her a shorter version of an essay I had published in the Saint Katherine Review (Volume I, Number 2, 2012) about my last days with two people I loved dearly, both dying from cancer. “Watching” now appears as one of twenty-six essays in the collection, Take Care: Tales, Tips, and Love From Women Caregivers, edited by Clift. I’m so pleased to see this essay get new life in this book, and hopefully find many new readers. It’s a story that’s very close to my heart, and as I read it again now—nine years after I wrote it and five years after it was first published—memories of those precious but difficult days with my father, and then with a dear friend, as they were dying, seem as vivid as if they were happening today.

Clift is the perfect editor for this collection, as she learned early in her life what it meant to be a caregiver, as she explains in the preface to Take Care:

My own experience with caregiving began at an early age. My parents had married late, and while my two siblings and I were still young, both our father and mother suffered from chronic and often debilitating conditions: asthma and depression respectively. By the time I was in high school and my older sister had married, I had taken on may of the demanding tasks of caregiving, including carrying out the responsibilities that keep a home going and take care of (and worrying about) my younger brother. After our father’s death, looking out for my mother’s best interests and ensuring her care became paramount tasks that went on for many years until she died at the age of 86.

Clift did all of this while being married, raising two children, completing a graduate degree and doing volunteer work with underprivileged women. A Vermont Humanities Council Scholar, she is an award-winning writer, journalist and workshop leader, a book reviewer for the New York Journal of Books, and a regular columnist for the Keene Sentinel and the Brattleboro Commons. Her work has appeared in The Boston Globe, The Washington Post, The Christian Science Monitor, and The Chronicle of Higher Education, among other publications.

I wasn’t familiar with the other contributors but as I read their bios and essays, I quickly realized what good company I am in. I’m honored to be part of this collection. I especially love Patti See’s “Joyful Mystery.” Her blog, “Our Long Goodbye: One Family’s Experiences with Alzheimer’s,” has been read in over 90 countries. Helen Dening gives us five helpful tips for communicating with someone who has Alzheimer’s in her essay, “Lessons from My Mother: Communicating with Someone You Love Who has Alzheimer’s Disease.” Deborah Marshall, an art therapist who works with grieving hospice families, contributes three wonderful poems. Karen Clark, who received her MFA at the City College of New York once owned a bookshop in New York and now edits, proofreads, is a contributing editor for two anthologies and is at work on a novel. Her essay, “Roar Above the Hum,” made me laugh out loud and clap my hands, as she tells the story of accompanying “Corine” to dialysis and hearing her stories of her life as a civil rights activist in the sixties, founding a school in Africa, and eventually becoming the principal of a failing Harlem school and turning it into a showpiece. I could go on and on, but I hope you will get this book and read these inspirational stories for yourself!

You can purchase Take Care HERE, or on Amazon.